Some Thoughts on Recruiting: A Non-Experts Look at the B1G Class of 2013 (As it Stands Now)

There are very few things in this world that are as obscure, creepy, and ridiculous as the recruitment of 17-18 year old boys to play major college football. We have talked about this in length, but it must be reiterated that the entire process is somewhat insane and if a person goes out of their way to mock a kid (cannot underscore the kid part of these recruits) for choosing a different school or for changing his mind, then we probably have a problem. Still, it is also a proven lifeblood to your program and as we have seen time and time again, it may not be a fool-proof predictor of success, it definitely plays a part.

Share All sharing options for: Some Thoughts on Recruiting: A Non-Experts Look at the B1G Class of 2013 (As it Stands Now)

So why am I even talking about this? After all, there are some fine folks at 247Sports, Scout, and Rivals that do just that AND there is a nice little Hub at SBNation that does an excellent job of rounding up and rounding out the SBN coverage and that one is free. But yeah, I am talking about this because it's still fascinating to think about what each class brings to the table. I will not get into specifics because I am not qualified and there are team-specific sites and blogs that will give you every creepy detail about each kid, but I do want to take a few minutes and dive into some numbers. Specifically, how do teams stack up nationally? With all this talk about the B1G unable to recruit, it was worth taking some time to break out Excel and try to make sense of my small data.

So this was pretty straight forward. I took rankings from 247, Scout, Rivals, and ESPN (although ESPN only lists the top 40 for free and actually messes with my data a bit). I put it in a chart, found an average and included SD for good measure. Since the data entries are limited to four, SD is somewhat ridiculous (especially on a subjective scale sense), but it helps explain Ohio State being generally considered top 5 and Michigan not except by Scout where they are 1. The data ends up extracting as follows: 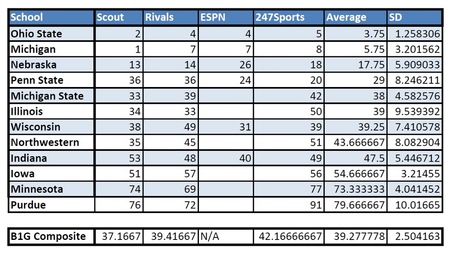 I honestly have no idea how to embed tables in HTML, so you're kind of stuck with the screen shot image for now, but you get the picture as a whole. As a general rule of thumb we see a set of schools trending where you would expect. Like I said earlier, ESPN only goes through 40, so some schools are only getting 3 data points, but until I find a lot more sites, this is what you get. Also, I have no doubt someone somewhere is doing a better job with this data, but stick with me.

Thoughts on the Data

Anyhow, those are some quick takes on where we stand. What do you all think? Are you happy with what your school is doing? Any big fish left to land? Do you think this whole recruiting thing is creepy? Lots to talk about in between now and spring camp. Man, I already miss football.

Hey, also worth pointing out, it seems that each of the team-specific SBN sites are doing fantastic recruiting coverage. As a Nebby fan, I've been impressed with Corn Nation, but you should check out all of the sites for their thoughts on this whole recruiting game (relevant links directly to recruiting sections when possible):

Michigan State: The Only Colors