The Big Ten at Ten is searching for a new villain in the football landscape.

Share All sharing options for: Big Ten at Ten 1.28.13: Searching for a Villain

Oh Biels. No really, oh Biels, we miss you. Why do we miss you? Because you were so damn easy to hate. Between that smugass grin you'd plant on your fat face before every Rose Bowl loss and the "On Wisconsin" you ended every conversation with, you were the Axl Rose of the Big Ten. No seriously: 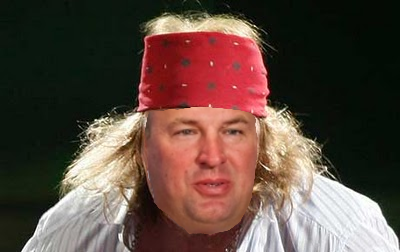 That being said, we need a new villainous football coach to hate. So who's it going to be? A list of the candidates:

Indiana Head Coach Kevin Wilson: Why? Because he's an outrageous asshole who has absolutely no sense of humor and dresses like the Michelin Man. The colors are "Cream and Crimson" not "giant white windbreaker with light khakis and white Reeboks." You look like an opened parachute, Kevin.

Iowa Head Coach Kirk Ferentz: Why? Because he's an overpaid has-been running an also-ran program who shirks the media and thinks he's beyond any sort of accountability in the state of Iowa. Also makes his son the tight ends/wide receiver/offensive coordinator...when he's not having him live in public housing.

Michigan Head Coach Brady Hoke: Why? Because he calls it Ohio. Then he loses to Ohio. He also turns what's supposed to be a Rose Bowl team into an 8-5 team that got singlehandedly bitch-slapped by Jadeveon Clowney.

Northwestern Head Coach Pat Fitzgerald: Why? Insufferable, obnoxious, trollfucking dickhead on the sideline. Acts like a small child and stomps and shouts when he doesn't get his way.

On to the links: