Breaking Down The Bradley Roby Hit And Ejection

Bradley Roby was ejected towards the end of the first quarter after a hit on Iowa TE C.J. Fiedorowicz. Was the ejection warranted?

Share All sharing options for: Breaking Down The Bradley Roby Hit And Ejection

At the end of the first quarter of the Iowa-Ohio State game, Iowa had the ball, first and 10, from the OSU 39 and lead the game 7-3.  On the play in question, QB Jake Rudock rolled to his left, and threw to TE C.J Fiedorowicz, who was open at the OSU 28.  Fiedorowicz caught the ball, turned, and was laid out by Roby, who hit Fiedorowicz hard enough to knock Fiedorowicz' mouthpiece out.

The referee threw a flag and assessed Roby a 15 yard personal foul penalty, and they also said Roby was guilty of targeting, and he was ejected from the game.  It was a big turning point, and although OSU would go on to win, losing a key player over a penalty was a big blow to a defense that was already struggling.

Should Roby have been ejected?  Let's break it down.

First, the NCAA 'targeting' penalty reads as follows, as per the 2013-14 NCAA Football Rules and Interpretations:

PENALTY-15 yards. For dead-ball fouls, 15 yards from the succeeding spot. Automatic first down for fouls by Team B if not in conflict with other rules. For fouls in the first half: Disqualification for the remainder of the game. For fouls in the second half: Disqualification for the remainder of the game and the first half of the next game. If the foul occurs in the second half of the last game of the season, players with remaining eligibility shall serve the suspension during the first game of the following season. The disqualification is subject to review by Instant Replay (Rule 12-3-5-f). [S38, S24 and S47]

Note 1: "Targeting" means that a player takes aim at an opponent for purposes of attacking with an apparent intent that goes beyond making a legal tackle or a legal block or playing the ball. Some indicators of targeting include but are not limited to:FR-88 Rule 9 / COnduCT OF PlayeRs and OTheRs suBJeCT TO The Rules

So, let's take a look at the play.  In the first shot, you can see Fiedorowicz (86) catching the ball, with Roby (1) stopping and moving to make the tackle: 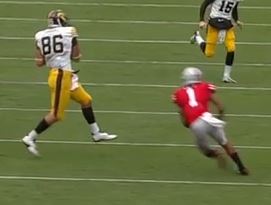 As Fiedorowicz turns to move upfield, Roby has squared up and is leaning towards the receiver with his left shoulder: 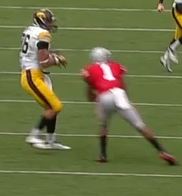 Here's where Roby got called for the penalty.  He launches towards Fiedorowicz, but he's leading with his shoulder: 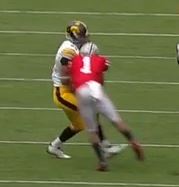 And this is what got Roby ejected.  As he moves to hit and tackle Fiedorowicz, because of his upward momentum, the left shoulder hits Fiedorowicz in the chest at the same time his helmet it Fiedorowicz' facemask: 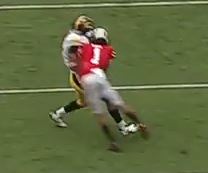 And here's a full GIF of the play, from the article by Luke Zimmerman and the good folks at LGHL:

So, was this a 15 yard penalty? Yeah, it was.  If you look at bullet one under 'notes', Roby pretty clearly launched, and you can't do that, but I don't think he was intentionally aiming for the head.  Still, within the boundaries of the rule, it's a penalty.

But is an ejection warranted, and is adding the ejection as part of the punishment a good idea?  I'm not talking about Roby specifically--there have been at least four or five other times this year that I've seen when this rule was enforced where I was left scratching my head on why the player was ejected.  I completely understand the need for increased vigilance in player safety; but I question the new ejection portion of the rule, and it's enforcement.

The NCAA should re-look the suspension angle of this rule, and modify the penalty for next season.  Instead of a 15 yard penalty and ejection for the rest of the game (or the next game if it happened in the second half), how about a player has to sit out the remainder of that drive, plus the rest of the quarter?  A second infraction would result in an ejection.  If it's a really over the top hit, like the one Carlos Aviles put on Indiana's Shane Wynn in the season opener, players would be subject to immediate ejection.

So yes, the call on Roby for a personal foul was a legitimate one, but no, I don't think he intentionally lead with his helmet, and an ejection wasn't warranted. And although I get that aspect aspect of this rule, the NCAA really needs to re-work and adjust the application of it.