Is It Basketball Season Yet?

Despite not being at the end of the football season (in reality or in practice), the football team is on a bye, so it's time for a look ahead to #iubb season.

Share All sharing options for: Is It Basketball Season Yet? 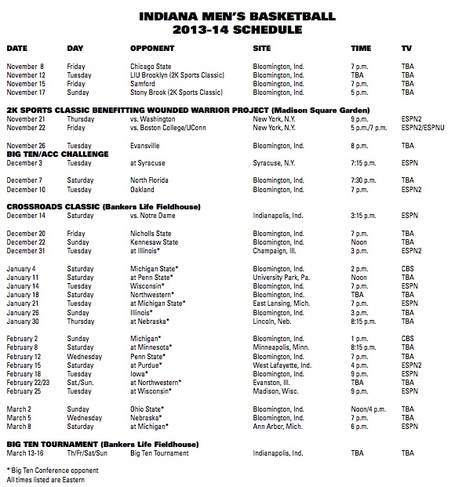 While many people (read: national media folk) have been deriding the non-conference schedule for the Hoosiers, let me point out a sobering, yet important fact: This is not last year's team. Cody and Victor are in the NBA. Jordan Hulls is in Poland, though he can probably still make a 3 at Assembly Hall from there. Christian Watford had a summer tryout in the NBA, and is currently in Israel. Derek Elston is in Malta. Maurice Creek and Remy Abell transferred to other programs. However, Tom Crean brought in a well-respected class, highlighted by Noah Vonleh, Colin Hartman, and Luke Fischer.

A quick breakdown of the roster, sorted by this season's jersey number:

#0 Will Sheehey: A key 6th man for last year's team is almost certainly going to be no worse than that same place this year, and may even find the starting lineup more than a few times. He's one of the two major returnees from last year's team, and will likely be a leader, if not a captain, for this squad. If he gets an open lane, be prepared for a highlight reel dunk, a la this one from his freshman year:

#1 Noah Vonleh: The highest ranked freshman from this class, and the one coming in with the highest expectations, Noah Vonleh is pretty much the 2nd coming of Cody Zeller in Bloomington. He is likely going to start, though if Peter Jurkin made enough progress over the summer, he shouldn't have to play the entire game too often once he gets up to speed. I wouldn't expect him to be one-and-done, though two-and-done is certainly in play if he stays healthy and lives up to the hype.

#2 Andrew Calomeris: A preferred walk-on who certainly has the right look for "#benchmob", "A Tribe Called Bench", or whatever the clever folk on the bench are calling themselves this year. Would not expect to see him in crunch time, or much of any other time either.

#3 Jonny Marlin: The IPFW transfer is ready to play after sitting out last season. Not sure where he fits into the team this year, other than he's not starting, but may see some decent minutes. He's a sharpshooter in the model of Jordan Hulls, but at 5' 10" is probably more likely to be another member of #benchmob.

#5 Troy Williams: Coming out of traditional basketball power Oak Hill Academy, Virginia's Gatorade Player of the Year is coming off a right hand injury, but once he's fully healthy should be competing for a starting job, and will likely be playing in many games regardless.

#10 Evan Gordon: One of Eric Gordon's two younger brothers transferred in to play his "senior" year at IU, and is wearing his brother's number while doing so. The grad student will likely play some minutes off the bench, and be a solid contributor.

#11 Kevin "Yogi" Ferrell: The starting point guard from last year is very likely to stay there this year and continue leading the Hoosiers up and down the floor. Yogi is on the Cousy Award watchlist, and could very easily be all-B1G if the Hoosiers do well this year. Will almost certainly be captain or co-captain with Sheehey.

#12 Hanner Mosquera-Perea: HMP had a fairly unproductive freshman campaign, thanks in large part to missing the first 9 games of the season due to the A-HOPE improper benefits suspension he and Peter Jurkin received last year. Indications are that he should be much better prepared for this year, and we may yet see the high-flying talent most expected Perea to be last season.

#13 Austin Etherington: After suffering a season-ending knee injury last season, Etherington returns to the court, and will likely see time during the non-conference season, but may not play much in conference if the freshman show enough progress early.

#15 Devin Davis: The short version: Highly touted junior year, fell off a bit due to playing out of position senior year. May not be too important to the main rotation, but should see minutes. Long version: go check out JustAJ's preview at the Crimson Quarry.

#20 Taylor Wayer: Indiana's best representative for the Club Trillion belt, and a valued member of #benchmob. Fan favorite for those reasons.

#21 Joe Fagan: Solid walk-on from Bishop Chatard. Probably yet another member of #benchmob.

#22 Stanford Robinson: If he's healthy, there's a good chance he's the starting shooting guard for the Hoosiers from game 1. If he's not quite ready at the start, expect him to come off the bench for a while, but be in the mix to start by the conference season.

#24 Jeff Howard: Mostly another #benchmob member, but has played some minutes when IU is short on big men. Likely to see him in a similar role this year. Club Trillion belt darkhorse.

#30 Colin Hartman: Will probably be a solid rotation guy, but may not crack the starting lineup, as IU has lots of talent at the 2, 3, and 4 spots, where Hartman slots in easiest. Check out AJ's preview over at the Quarry for a more through recap.

#33 Jeremy Hollowell: The most up and down player from last year's vaunted "Movement" class, Hollowell has a chance to start, but most likely slips into Will Sheehey's role as the first man off the bench. If he underperforms too much, he may not be wearing cream and crimson next year.

#42 Peter Jurkin: He's still a bit of a project, but could be the starting center, pushing Noah Vonleh to the 4. It's also possible that he slots in as the backup center to Vonleh, or both: this is still a Tom Crean team after all. 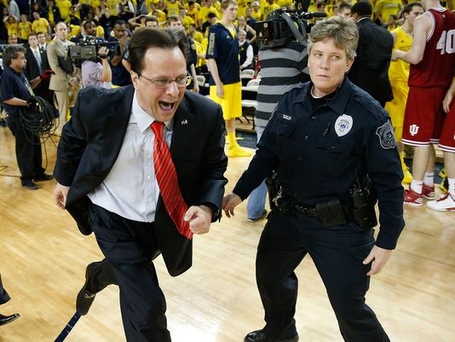 Pictured above: Tom Crean on caffeine, via www.gannett-cdn.com

#44 Luke Fischer: The 6' 11" freshman will probably see a good bit of playing time at the 4/5, but will probably start the season on the bench, as recent injuries are still healing. Will be a big factor for the Hoosiers going forward, but hopefully won't get out on the floor until he's fully ready to go. Sure glad we stole him from Bo Ryan and the Buzzcuts.

So, what will this Hoosier team do this year? As I didn't attend Hoosier Hysteria, and have managed to isolate myself from too much news about Indiana Basketball so far (it's still football season for me), I don't feel comfortable offering a wins and losses prediction right now. I'll simply say, this team could compete for the Big Ten title, and should comfortably slot into the top half of the NCAA tournament. Gun to my head, I'd say this team goes 23-8 in the regular season, with a margin of about 2 games either way. Here's hoping that this is finally the year the dusty banners argument goes away, but no matter what happens, #iubb will be a team to watch this year.