Mayhem in the Mitten

It's going to be 40 degrees and raining in East Lansing on Saturday.

Last year's game was an offensive sputterfest, but didn't fail to provide end-game drama. This year shows an improved Sparty squad favored at home against the hot and cold Wolverines.

Questions answered below by Graham and Green Akers:

Which Michigan fanbase wants this more?

Which individual matchups are worth watching?

Which MSU offense will show up?

Michigan, 6-1 (2-1), a disappointing team that keeps its record respectable thanks to lucky bounces, a mediocre schedule and some offensive fireworks that pop up here and then.

MSU, 7-1 (4-0), playing their best football yet, with an offense that has officially come around to be called "stable", which is a far cry from "gahhhh" like earlier in the year. Oh I guess the defense is #1 in the country, so that's ok too.

What it means largely depends on which side of the fence you come down on. This game is always the Super Bowl of MSU's sports year, unless we make it to the Final Four or (I can dream) the Rose Bowl. It's the first game most fans find on the schedule when it comes out, and a lot of us know the date off the top of our heads for months ahead of time. This week, thinking about the game will be a gradual crescendo in the back of my head until there's no room for anything else. Michigan fans try to play it off, but nobody's buying that. No, MSU isn't your Super Duper No. 1 Rival, because what you have with the Buckeyes is special darnit, constructed upon long decades of scheming to keep the rest of the conference in serfdom maaaaaan. But whether most of you will admit it or not, you want to keep 'little brother' in his perceived place just as badly as we want to rise up and thrash your smug asses until you say 'uncle'. Ultimately, it's hard to say who wants it more, since you guys are so guarded about your real feelings for us, but

As far as who needs it more...for this season, Michigan does, and a quick glance at the standings is all the explanation you need for why that's so. I'd be slightly inclined to say Michigan in the big picture too, actually. The early-season mutiny among MSU's fanbase has mostly quieted thanks to substantial progress from the offense, and a growing appreciation for what we're watching on defense. Correct me if I'm wrong, but from what I've noted among the Michigan faithful, it really looks like Hoke's honeymoon is over. On offense, it still feels like Borges hasn't implemented his system or any coherent system other than 'Devin runs around and does something and maybe Jeremy does something too', and the defense just surrendered at least 45 points in consecutive games. Expectations are so high at Michigan that impatience seems to be setting in pretty abruptly, and landing all those uber-croots might have accelerated the timetable for high-level success at Michigan. I see some parallels here, BTW, to Nebraska fans. I could be wrong here, but that's the sense I get.

Let's talk nuts and bolts a little. What matchups are you looking forward to watching? I'm interested to see how Narduzzi handles that lethal combo of Gallon and Funchess on the outside. Dennard and Waynes are as good a corner combo as you'll find, but man are those guys a tough pair to cover. I'm also under the impression that Michigan's LBs aren't very good in coverage, so maybe this is the game where the all shallow drags and crosses MSU likes to call actually produce some results. Anything in particular catching your eye?

Yeah, you read the tea leaves correctly. If the one-yard gain stretch play is run again, we're all ship jumping. A great coach recognizes his team's weaknesses and strengths and adapts to them. It remains to be seen whether the free-wheeling offense in all its horrible glory...will be allowed to continue.

Here is my #1 "Obvious Things!" statement: Michigan cannot run the ball in a conventional manner against Michigan State. If you can't do it against UConn, you can't do it against State. So will Al Borges try something clever with the run game? Will he screen right off the bat to scare the DE's and make them stay home, thus opening up 5-7 step dropbacks from pressure? Will Michigan jet sweep early to pull linebackers out of position? Will Michigan be deathly afraid to run Gardner on QB draws and bootlegs because MSU might smash him?

Obvious Thought #2: MSU's quarterback completed some very interesting passes against Illinois. Seam routes and drags that went farther than 10 yards, oh my! Will the Spartans let Connor Cook make those throws versus Michigan? Or will Sparty go safe and conservative, believing the tough O-Line can open holes?

MATCHUP EVERYONE IN MICHIGAN WILL BE WATCHING: The Michigan State cornerbacks versus Funchess and Gallon. The Wolverine's weapons versus the uber-aggressive Darqueze Dennard and company.

Well, a big part of the reason MSU's offense struggled so badly early on is that the coaches stuck with a balanced attack even as Maxwell and then Cook weren't executing it very well. We're all kind of hoping that Purdue was some kind of outlier, which might not be too outlandish since Cook's been very good to great in 3 of 4 starts since the bye. MSU called something like 75% run plays against Illinois because it worked exceedingly well, and there was no reason to go away from it. When you add to that the fact that Cook and Langford can sell play-action much better than Andrew Maxwell and Nick Hill did, this offense looks a lot more like it did when Kirk Cousins was under center.

Taylor Lewan made some comments that Michigan isn't going to be bullied on Saturday. You could take that a few different ways; even though Shilique Calhoun's been even better in a lot of ways, it does kind of make me wish we got to see William Gholston and Lewan go at it one more time. Pretty sure it would just turn into American Gladiators by halftime. Lewan's bluster aside, Michigan's offensive line in general hasn't been very impressive, and they're rolling with a very, very young interior in particular. Color me skeptical that teenagers, however talented, can take on 4th, 5th, and 6th (I see you Tyler Hoover) year players that have already stymied much better rush attacks. If Al Borges doesn't change his gameplan for this one and try something other than bashing his offense's collective head against the wall that is MSU's run defense, I'll officially endorse the grumbling in the Wolverine fanbase as warranted. 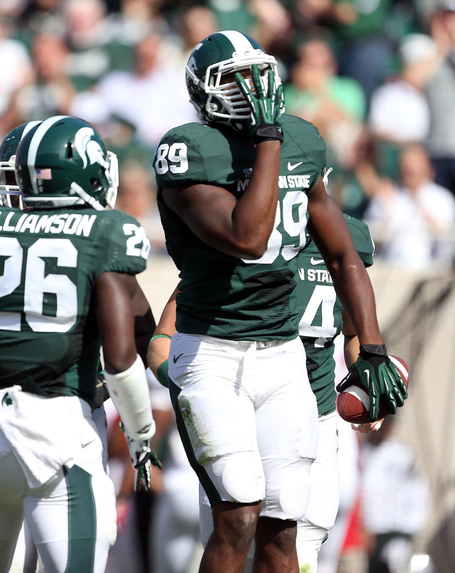 Thank you for allowing Wolverines to grumble. Onto PREDICTIONS!

First, who wins and what's the score?

Second, who is your offensive player/unit of the game?

Third, who is your defensive/player unit of the game?

I've been bearish on MSU most of the year, but I'm calling them to win this one, probably something like 19-10. The weather's supposed to be kind of nasty, so I expect the sort of grind-it-out, field position game we saw last year. To me, taking the air out of the ball plays into MSU's hands perfectly; big plays from Gallon and Funchess are the thing I'm most concerned about, so if the weather makes it harder to pass, all the better.

I wouldn't be surprised if Devin Gardner has a good statistical day both on the ground and through the air, if only because I don't think Michigan's offense has any substance beyond him. Defensively, I'm hoping for a big day from Isaiah Lewis. He'll likely be matched up with Funchess at least some of the time, and disciplined deep coverage from Lewis and Kurtis Drummond will also be critical to preventing the scramble, scramble, scramble, HEAVE big play that has been the most dangerous thing about Michigan's offense (I promise that's not supposed to be totally derogatory; it works, it just feels so damn fluky). How do you see it playing out?