Where We Be, What We Be Drinking: Week 6

Fall weddings, GAMEDAY, Fishbowls and 4LOKO. It's time for WWBWWBD.

Share All sharing options for: Where We Be, What We Be Drinking: Week 6

Let us know your Saturday plans in the comments if you feel so inclined.

babaoreally
BYE WEEK. Thank God. I will not be watching Purdue play football this weekend somewhere in the USA.

Jesse Collins
Living it up in Omaha again. Thought about going down to Lincoln, but I don't want to be there on the off chance Illinois knocks Nebraska off. Instead, I'll probably be kicking back in an Old Chicago drinking and eating with some buddies while Nebraska does it's best impression of not giving Illinois a nice thing. If I get really really creative, I'll maybe even host a watch party for the rest of the games... Really not sure that happens.

GoAUpher
My couch, with a Lift Bridge Hopdish again. I haven't decided what bourbon will be on hand to improve the mood if things go south. [Ed. note: I believe he meant "when things go south".]

Ted Glover
I was going to head to Chicago, but because I am now furloughed I'm going to hold off so I can keep my money in reserve for a rainy day...because it's a rainy day. I will not skimp on the beer, however. Now that I'm not working, I can literally spend all day in the liquor store if I want to, deciding on what beer I want to try, and by God, that's what I'm going to do tomorrow. I'll also have a sixer of Leinenkugel's Honey Weiss at the ready in case my beer of choice is something I decide I don't like.

I think I'm also going to fire up the smoker and make some ribs. Because nothing says 'Merica like an unemployed dude drinking expensive beer, while smoking an expensive cut of meat while tweeting about it from his iPhone.

Brian Gillis
Ann Arbor, Michigan. I'll be making the cross-country flight back the Big House to see what Michigan was able to accomplish during its bye week.

C.E. Bell
I will be at a family wedding. In Indiana. With a dry reception. INSTEAD OF BEING AT THE BIGGEST GAME IN MODERN NORTHWESTERN HISTORY!!!!!

Luckily, the wedding is at 4:30 pm ET. Appropriate schmoozing/reception time means we should be heading towards my cousin's house where we're staying by kickoff, and arrive there certainly no later than the end of the first quarter. He's going to DVR the game, I will avoid all technology between kickoff and when we start watching, and he should have some Maker's Mark and/or wine for us to enjoy as we watch Herbie and Brent call the Wildcat upset.....

MNWildcat
Hey, did you guys know College Gameday is coming to Evanston?!

I'll actually be arriving in Evanston on Friday afternoon, parking in my tailgate space, and joining the NUMBAlums for the Homecoming parade. You can see me on sousa, passing a bottle of Jager back and forth with my section-mates. Mmm. Later that night, the Young Alumni Reunion is having an all-you-can-drink affair at Public House in River North, so I'll be heading down to Chicago, because I've never met an all-you-can-drink affair I didn't like.

Saturday morning? Up on the L and out to the usual Lakeside lot by about 6am, pulling the tailgating equipment out of the car, and having at it, because DID YOU KNOW GAMEDAY'S COMING?!? Breakfast-y type drinks like cheap beer and tequi-mosas will be flowing as we walk back and forth between the periphery of the Gameday crowd and the car. A Homecoming tradition, we will proceed to Bat17 for the Beer Tower Race(TM), which is exactly what it sounds like. Return to the car, tailgate more, then move to West Lot to just go nuts -- NUMBAlums bringing the usual Homecoming accoutrements: jello shots, more beer, classier beer, and more beer. Probably some purple shots in there, too. If I don't remember kickoff, at least I can say I was there.

Jonathan Franz
I'll be in Evanston braving the rain and eating and drinking my way through the Windy City.

Candystripes for Breakfast
Another noon kickoff for IU football means I'll be at home in Lebanon having breakfast during the game. That means milk as the beverage of choice for starters. For the rest of the day's slate, it'll probably be Sierra Mist Cranberry Splash unless I find time to acquire a better soda pop choice.

Graham Filler
5k in the morn, Shorts for State game at noon, Old Granddad for the Michigan game. Supposed to be a warm rainy Michigan day, which is heaven in my eyes.

I think we need to play a new game called "What C4B Isn't Drinking" where we make up wild, high ABV drinks and then put a picture of C4B slowly waving his finger at the drink, Dikembe Mutombo style. 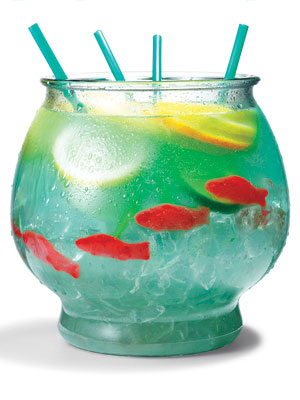 C4B: I was going to ask for a Dikembe gif to go with the fishbowl, but I don't know how you'd ever get his permission.

MNWildcat: He'd probably just say "No no no" and wave his finger in your face, anyways.

Mike Jones
I'll be traveling to Iowa City to treat my father to his first Iowa football game. I'm the first to actually graduate from college in my immediate family so it goes without saying that he isn't too into collegiate sports. But, since I went to Iowa he's become a Hawk fan and had always wanted to visit Kinnick Stadium.

He chose the Michigan State game for some reason. I asked why. He said "because they always kick the shit out of each other."

We'll get there a little early and enjoy some cheap Bud Light or the like just to get a nice buzz for the game. I've also discovered something known as: 4LOKO. It puts me in a "party mood."

Green Akers
Lansing, also doing the Color Me Rad 5k in the morning, so I think that means Graham and I will both be doused in fluorescent color packets. Proceeds are benefitting MSU Engineers Without Borders, so I guess I can drag myself out of bed by 8. Assuming I make it through the race without a heart attack, I'll proceed to Oktoberfest in Old Town Lansing to drink it off and watch the MSU game in a big tent.

Also: Mike how did you not know about 4LOKO? It had a brief, intense heyday here in MI before a few stupid teenagers drank too much of it and died from either alcohol poisoning or their hearts exploding, I can't remember which. Either way, the legislature got all hot and bothered and banned the old formula, so the version we get now is a pale facsimile of real 4LOKO. If you can still get the real stuff in Iowa, more power to you, but remember a couple things my friends and I learned in the summer of 2010: two will do you, and the 4LOKO train ain't got no brakes.

Mike Jones: I had heard about the original 4LOKO but never tried it. The stuff we have here is the watered down version. I was ready to party for hours on end until about 9am when I crashed out hard.

Aaron Yorke
I'll be at the Penn State bar in New York city drinking Yuengling with some fraternity bros. My friends used to experiment with 4LOKO when I was in college. I think if you drink enough of that (read: one can) you starting acting like Lee Corso during the last five minutes of College Gameday.

Hilary Lee
I'm still trying to score a ticket to the Northwestern game, but at the very least I expect I will be in Evanston for GAMEDAY GAMEDAY GAMEDAY and then tailgate before watching the game at a bar somewhere....