B1G Player(s) Of The Week: The Jack Hoffman Edition

Share All sharing options for: B1G Player(s) Of The Week: The Jack Hoffman Edition

A wild B1G weekend was had by mostly all, what with Indiana upsetting PSU and OSU surviving in Evanston. We at OTE want to salute the warriors, both offensive and defensive, who showed up Saturday and put a little extra mustard on the proverbial hotdog. But first, a shout-out to Jack Hoffman, the courageous young man fighting cancer and winning ESPY's and inspiring many.

It has been an unbelievable ride for the young 8 year-old Jack Hoffman. Getting more or less adopted by your favorite team - the Nebraska Cornhuskers, being treated like a little brother by Rex Burkhead and then pulled into the fold by his teammates, getting a call to run the ball in the Nebraska Spring Game by the Head Coach himself, grabbing a touchdown on that run with the help of the Starting QB, and then bringing people to tears with a smile on your face as you accept an ESPY. All of these things are a lifetime's worth of memories except when you are 8 and have dealt with brain cancer. Then it's not a guarantee that you have a lifetime to live and things get put into perspective really quick.

Well, we here at OTE want to throw out a special POTW to our man Jack Hoffman, who at the age of 8 has been told by his doctors that his cancer is in remission. I get chills thinking about the joy he must feel and the hope he can give other children - and adults - dealing with the hell that is cancer. As part of the news, Jack will get to remove his chemo-port and hopefully start getting to be a normal kid again. He has been a trooper through all of this, and I have been very impressed with his ability to deal with his newfound fame. Above all else, he and his foundation have targeted a goal of $1 Million in research fundraising for 2013, which shows that this is so much bigger than one kid. Let's all toast to giving cancer the middle finger, and to a little kid who gave us a glimpse into why College Football is the best.

It would have been tempting, after the flag-a-palooza in South Bend two weeks ago, for MSU's corners to ease off with the physicality a little, or for DC Pat Narduzzi to start rolling a little safety help on the deep throws. Well, if you thought that would happen, you don't know Pat Narduzzi very well, do you? Nard-dawg's scheme, even after the hail of laundry at Notre Dame, requires that his CBs roll Hawaiian-style, meaning on islands, bro. Darqueze, for his part, knows he's dropped a few very interceptable balls this year, and that's not going to boost his draft stock any. So, dude goes ahead and snags 2 INTs off of Jake Rudock.

And, lest you think he's some delicate little coverage flower who won't get his nose dirty in the run game, Dennard also contributed 8 tackles (unofficial count) overall. Not bad when you consider a few of those tackles came on human bowling ball Mark Weisman, who outweighs Dennard by about 60 pounds. DD and the rest of the Spartan defense put together a great road performance just in time to greet the best offense they'll see in the regular season, as the Hoosiers' newfangled 'passing offense' comes to East Lansing on Saturday.

We always were hopeful that the Nebraska offense could be a running juggernaut. Bo Pelini claimed he had the offensive line in place, the skills guys who could execute, and an offensive coordinator who knew how to make everything click. Through four games, however, things weren't all pretty. In fact, I'm pretty sure when I tweeted #TimBeckDoesTimBeckThings, it was the most apt description of how Husker fans have felt this season. Know why none of that matters? Ameer Abdullah is good enough to make all of it go away.

Look, I understand Illinois' run defense was the equivalent of trying to use a newspaper to stay dry in a monsoon, but Abdullah was a boss this weekend totaling 225 yards on the ground, two touchdowns, and one reception just to make sure that the stat boxes were full. He averaged a little over 11 yards per carry, and he is now ninth in YPG and 7th in total yards. He has power, some finesse, and just a beautiful vision of the open field. There will be tougher weeks ahead - not next week, though, I totally expect this again at Purdue - but things are looking up for Abdullah. 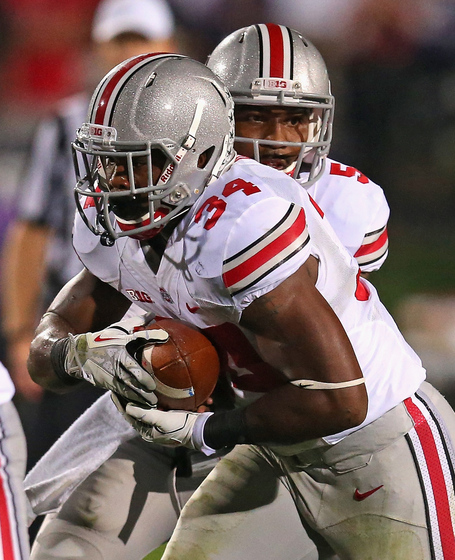 Big time players make big time plays in big time games, and Carlos Hyde was as big time as you can get Saturday night in Evanston.  Playing before a raucous crowd, Ohio State stumbled out of the gate against Northwestern and found themselves down 10 points in the second half.  That's when the Buckeyes turned to Hyde, who took the game over and steamrolled his way through the heart of the Wildcat defense, going for 168 yards and three touchdowns.  On a night that saw QB Braxton Miller turn into just a guy for a game, Hyde took the offense and put them on his back, making clutch runs and catches in the fourth quarter. When he scored his third rushing touchdown late in the fourth quarter, it proved to be the game winner, as OSU outlasted Northwestern 40-30.