A Little Bit of History Revisited

Looking back at two years ago this week in Indiana basketball history.

Share All sharing options for: A Little Bit of History Revisited

The University of Kentucky Wildcats vs the Indiana Hoosiers.

The shot that revived a comatose program.

The ESPN call, by Dick Vitale and Dan Shulman

The IU Radio Network call, by Don Fischer and Royce Waltman, set to the ESPN footage

(Unsurprisingly, the Kentucky radio call has never surfaced on the internet. There is a parody version of what it may have sounded like on YouTube, but despite the comments section kvetching to the contrary, it should not be taken seriously.)

WATFORD FOR THE WIN. YES!

Two years to the day of the ESPY winning Wat Shot, both teams were in action again. Only this time, they were not playing each other. Indiana was hosting the Oakland (Michigan) Golden Grizzlies, and Kentucky played host to Boise State. Neither team needed last minute heroics to claim victory, as the Hoosiers handled the Grizzlies 81-54, while the Wildcats comfortably beat the Broncos 70-55. This would have likely been Indiana's year to host the Wildcats, had the series continued after the 2011-12 season.

Kentucky fans claim the rivalry series ended because Indiana refused to play Kentucky on a neutral court instead of home-and-home. Indiana fans claim Kentucky ended the series because Coach Calipari was scared of bringing his team back to Assembly Hall. Indiana athletic director Fred Glass has publicly said that he was willing to move to a home-home-neutral-neutral schedule for the series, but Kentucky rejected the idea, standing firm on only neutral court locations or nothing. Thus, one of the Midwest's most storied inter-state, cross-conference rivalries ceased to be for the foreseeable future.

The teams look very different as well. Of the starting fives for Indiana and Kentucky in that game, no players remain on either roster. In fact, of the 16 players who contributed minutes for either team, only Will Sheehey remains. Kyle Wiltjer, the only other collegian of the 16, transferred to Gonzaga. The rest either found themselves in the NBA or have since graduated.

And what of Christian Watford? After graduating, he made sporadic appearances in the NBA Summer League, and is currently pursuing his basketball dream playing in Israel's professional basketball league. He hopes to have a more memorable basketball career than the only other Hoosier to make a game winning three to beat the #1 team in the country in Assembly Hall, Kirk Haston, who had a brief NBA stint along with some other lower level experience before retiring to coach high school basketball at his alma mater in Tennessee.

As someone who attended IU vs. Kentucky, it is without a doubt the single best game experience I've ever had at any sporting event ever. Assembly Hall was packed to capacity. People tried to camp out before the game, and were sent away because the athletic department hadn't prepared for such an occurrence. The student section basically took over the national anthem from the usual singer, a moment that felt awesome at the time, and I'm still disappointed hasn't somehow ended up on YouTube. During the introductions of the UK starters, you couldn't hear arena announcer Chuck Crabb because the booing drowned him out. The back and forth scoring kept everyone on edge the entire game. Finally, once the shot went in, a sea of red descended upon McCracken Court. 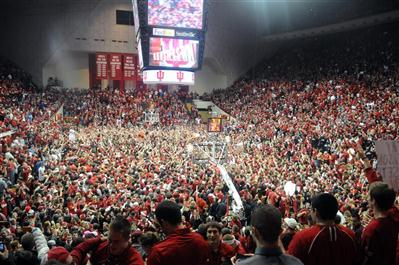 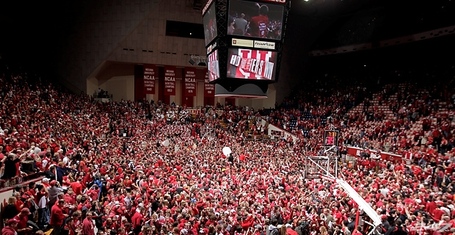 There were people on the court over an hour after the game had officially ended. The main focus of the after-party then moved to Kirkwood, where the Bloomington Police had to eventually close the street on the campus end, because everyone was flooding the street. 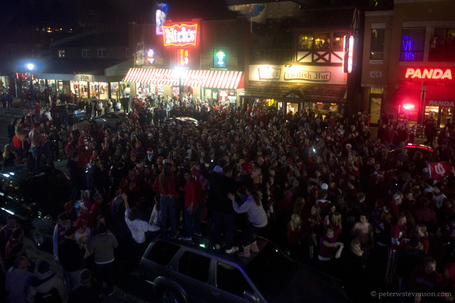 It was a game for the ages, an instant classic, and it's a shame that it won't be played again for a long time to come.