It's Hard Out Here For a Hoosier

Share All sharing options for: It's Hard Out Here For a Hoosier

An article popped up on Tuesday that listed what the USA Today Staff believes are the 6 hardest coaching jobs in sports. If you haven't read through it yet, check it out here. Go ahead, I'll wait.

Yeah, that is actually Kevin Wilson and the Hoosiers on that list. I know, I was actually as surprised as you were at first. I mean, IUFB is certainly not the first program that comes to mind when thinking of high expectations in college football. 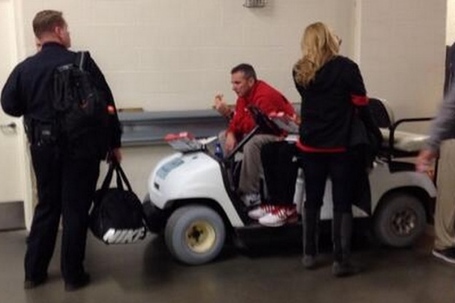 But, as Paul Myerberg points out, "No Indiana coach in the modern era of college football – a period loosely defined as beginning with the end of World War II – has won more than 47.3% of his games." So while championship pressure is rarely if ever on the Hoosiers, the pressure to be the team that actually establishes a winning tradition at IU gets higher with every new coach hired and fired. No Hoosier team has been better than .500 in Big Ten play since 1993, when the Hoosiers tied for fourth place. Only two teams since have been exactly .500 (1994, 2001), and only one team since has been bowling (2007). And Indiana hasn't won a Big Ten championship or appeared in Pasadena since they shared the title in 1967, the second of Indiana's conference championships in football ever (they won outright in 1945). A Hoosier squad has never been ranked higher than 4th in the AP poll, hasn't been ranked since the 1994 season, and hasn't recorded a bowl victory since the 1991 Copper Bowl, a 24-0 shutout of Baylor.

With all of these lackluster results around Hoosier football, it shouldn't take much to have the most successful run in school history. Only 4 men have finished their tenure as Indiana's coach with a winning record, none since 1947: James Horne (1899-1904), James Sheldon (1905-1913), Bo McMillin (1934-1947), and Jumbo Stiehm (1916-1921). Only 4 coaches have led the Hoosiers to a bowl game (Bill Mallory, Bill Lynch, John Pont, and Lee Corso), three of whom only have one bowl team (Mallory had the other 6), and only Lee Corso's 1979 Holiday Bowl winning squad left its coach with a winning record in bowls as Hoosiers coach (Mallory lost his first two bowls as IU coach, and never got back to .500 in bowls).

And sadly, with his current record, Kevin Wilson is still the 18th (of 22) most successful coach by win percentage, and 14th by wins, in Hoosier football history. Assuming he is still at the helm at the end of next season, he will be tied for the 12th longest tenure in years coached, and will be 10th in games coached if he does not leave or make the postseason.

So, did Indiana deserve to be 6th in that article? Absolutely, but only because putting them at number 1 would have driven other people crazy.