Off Tackle Empire's wildly inaccurate bowl projections for the Big Ten following week 14. The Big 10 regular season is over :(

The chaos that was last weekend began in Lincoln on Black Friday when Iowa took down the greatest program there ever was since Paul travelled to Damascus. The Hawkeyes victory over the Cornhuskers secured them an 8-4 record and their first winning season in conference since 2009. Aside from that upset everything else was supposed to go to plan. And for the most part it did. Michigan State downed Minnesota, Ohio State survived Michigan's upset bid/two point conversion, Indiana beat [ERROR], Northwestern retained the Land of Lincoln trophy (congrats on not going winless in conference!) and then uh...well...this happened.

But those things happened and Wisconsin is now ranked 21st in the nation. From Orange Bowl to Orlando. Hey, I guess it's still in Florida...right?

As Wisconsin was soiling themselves in Madison the game of the century was unfolding in Auburn. I don't need to summarize. You all watched it. If you didn't you should probably just quit college football and go watch cricket or something. The end result is that Ohio State is currently 2nd in the BCS standings and is a Big Ten Championship win away from playing in Pasadena on January 6th.

And the talk has already began. Should Auburn jump Ohio State for the number two spot? Auburn Athletic Director Jay Jacobs thinks so. In fact, he believes it would be a disservice to the nation if Auburn was left out of the BCS Championship. I get it Jay. You don't want 2004 all over again. But a couple things:

Do you understand? You give up the right to complain about the system and the rankings when you lose a football game and the AQ team ahead of you is undefeated. And you lost to LSU. It's not even like you lost to someone elite. You lost to a team that lost to Mississippi. Maybe if you took care of business against the Tigers you would be in Ohio State's position. But you aren't. Ohio State is undefeated and they deserve their ranking. But you don't understand that, do you? Apparently the South doesn't either: 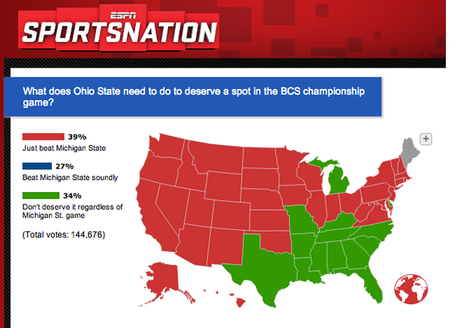 Blatantly stolen from a Hamsterdam poster at BHGP.

I see these things happening:

With that being said, here are the rules.

As Ohio State and Florida State won their championship games they'll play for the crystal ball in Pasadena. The Orange Bowl has the first at-large pick and will obviously take Alabama, as Auburn will win the SEC and play in NOLA. Then...things get rough. The Sugar Bowl has the next pick and will have to decide between AAC champion UCF or MAC champion NIU. Neither of those are appetizing but they'll pick UCF because of proximity. The Fiesta Bowl, which has the final pick, will be forced to pair NIU with Oklahoma State because the Huskies will receive an AQ bid.

Michigan State loses in the B1G Championship but still goes to the Rose Bowl and plays Stanford. The people down in Tempe are drooling over the prospects of matching Nebraska up with an old Big 12 foe. If I told you Michigan was playing Georgia in a bowl game back in September you probably thought it was the Capital One or even a BCS game. It isn't, it's the Gator Bowl. Minnesota brings up the rear and plays Texas Tech in Houston.

As we won't fill our bowl allotment (thanks Illinois, Indiana, Northwestern and [ERROR]) the remaining bowls will go to teams from lesser leagues.

And yes, that means Iowa is going to the Outback Bowl and will indeed be picked above Minnesota. Come receive your shaming, GopherMike.