Quite a battle shaping up between the Spartans and the Bucks

The Big Ten Championship Game is upon us. And not only is it meaningful, but it's going to be hardfought according to our...experts. Seven of our writers picked OSU, while five writers picked MSU. Your OTE Writers PREDICT:

My completely worthless prediction? MSU holds OSU in check for most of the game but Braxton and Co. are able to break through enough to take a lead that MSU can't top despite a decent offensive performance. Call it Ohio State 35, Michigan State 31

34-24 OSU (I originally had it 31-17, but I think OSU will score a little bit more, and it's going to be a closer game than I originally thought)

There are a few immutable truths of College Football these days, #1 being that the more we know about an outcome, the more likely said outcome will disappear into an oblivion of randomness. I fully believe that Ohio State can move the ball on MSU, and I fully believe that the front seven of OSU can force Cook to play Superman. I also fully believe that OSU is the better overall team who by all accounts should win. MSU 24-OSU 17 because that would be very B1G of us. 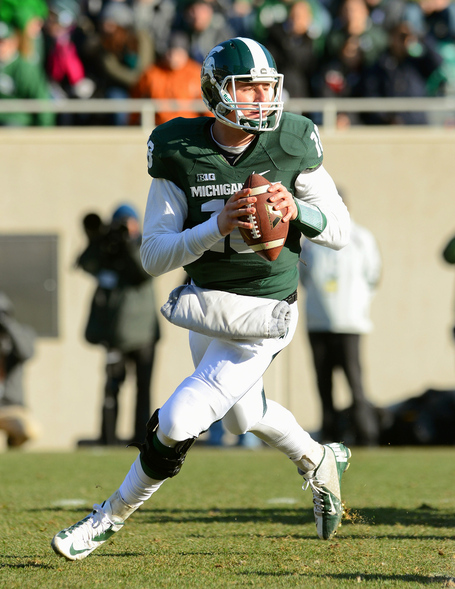 All due respect to Alabama and Auburn's great game last week, but this might be the game of the year in all college football. I'm excited just thinking about this.

So, prediction? This is going to be a brutal, slug-fest of a game. And as much as this might pain the conference.....I think Sparty wins, riding an absolutely tenacious defense, crafty special teams play, and a good enough offense led by Connor Cook to victory. Sparty 19 - Ohio State 14. As a result, the SEC gets its wish of having a team in the title game....but who cares, because this B1G Championship game will have been tremendous.

I'm no SEC shrill, but it will be nearly impossible for Ohio State vs. Michigan State to top the drama that took place in Auburn on Saturday. However, this should be one heck of a game in its own right. I'm surprised that the Buckeyes are favored by 5.5 right now considering how much they've struggled with inferior opponents lately. They've allowed at least five touchdowns in two of their last three games.

Sparty, on the other hand, has been dominant since they only beat Purdue by 14 points. Michigan State has allowed Illinois, Michigan, and Northwestern -- all teams that rolled up gaudy point totals versus OSU -- to a combined 15 points. That said, Ohio State's offense should make this a terrific game. I think MSU wins 21-20.

Look, Mark Dantonio is a great coach, and what Michigan State has done this year is impressive. Sparty has had a great year, and will be an excellent Rose Bowl participant. All of that said, Ohio State is going to come out and run over Michigan State in Indianapolis. Urban Meyer is too good of a coach to let his team get complacent now, and unless the solar system class (downgraded from galaxy class) defense of Michigan State forces Braxton Miller into more than 2 turnovers, the Buckeyes are going to win. Ohio State 35, Michigan State 21.

I personally am very eager to see The Clash of Man-Ball when Michigan State travels to play Stanford in the Rose Bowl. That game will end 13-10, have ESPN howling about boring Big Ten football while honoring the amazing depth and defense of the PAC-12, and we will love every minute of it.

I hadn't realized until today that Ohio State is ranked second in the nation in rushing yards per game, with 321.3, averaging an absurd 7.05 ypc. That's best in the nation by nearly a half yard. Obscene. Michigan State, equally obscene, is 1st in the nation in rush defense at 2.23 ypc and 64.8 ypg, and that's not even close. Not even the Gophers running the ball 50-odd times could change how vast Sparty's lead is in the country. You literally cannot ask for a better clash of offense vs. defense in a final.

On the other side of the ball for each team, though, is an Ohio State team that's sneaky good against the run (3.02 ypc and exactly 100 ypg, 7th in the nation) and an MSU squad that wants to pound the rock, already eclipsing 500 carries, good for 186.2 ypg and 4.45 ypc (47th). My key matchup for this game is Michigan State on offense, getting to 3rd downs: can they avoid the 3rd-and-long (6+ yds) situations that force Connor Cook into the air? If the Spartans can keep Cook out of pressure situations, I think they have a 50-50 shot. Ohio State will get their due touchdowns, and the onus is on Michigan State to keep up. They try vainly, but fall just short. Ohio State, 30-23.

This game is going to be absolutely phenomenal, and I can't wait to shake off the Friday night office Christmas party hangover to watch it (yeah, it's gonna last that long).

I like the Buckeyes. The defense was embarrassed on Saturday. I think they make a statement this week.

Look, I know what's probably going to happen. Urbz's machine is impressive. 4 talented senior linemen plowing the way for Hyde the Dumptruck would be a very good offense even without Braxton Miller, and the defensive line has started to realize its immense potential, too. But I also see a team that just yielded 41 points and 600 yards to a Michigan offense that managed about 3 feet on the ground the previous month. I see an MSU offense that still isn't great, but can put the occasional drive together and at least isn't dead weight. And lastly, I see in Mark Dantonio the one gameday coach in the conference who can give Urbz a run for his money. And it makes me think, not so fast my friend. This team feels right in all the ways last season's didn't. The greatest class in Michigan State history will find a way to get this done. Should be a hell of a game. MSU 30, OSU 28

Ohio St-31 Michigan St-30. While nation argues for Auburn, other SEC Tigers sitting back waiting to pounce. Mizzou pretty damn good, tough task for Auburn to play at that level 3 straight games. Then we'll get a month of "Ohio St doesn't deserve to be there" vs Winston-less FSU. Fitting death to the BCS