Jim Delany Plots To Take Over The World

Is Jim Delany a commissioner of a great football conference, or does he want to be the Emperor of the Grand Conference of the Republic?

Share All sharing options for: Jim Delany Plots To Take Over The World

Scene: Jim Delany's field office, somewhere west of College Park, MD. Delany stands in front of a map with a large covering over it, obscuring the map from view. Delany has called a Council of War with his field generals, and he will give them news that will shake the Union to the core.

Gentlemen, I've called you here today because now that we have stabilized the front and called up reinforcements, I've decided that we can't stay here much longer. It is time to act, and end this war once and for all.

Is the war over? HUZZAH! HUZZAH! I'm so glad I won't have to deploy my army anymore, they're pretty chewed up.

Isn't that the truth. I mean really, I wouldn't trust you at leading a mass retreat, much less an attack.

Hey, I can lead a retreat. I'm pretty good at getting my ass kicked.

Shut up, both of you. I want to show all of you my plan to end this bitter Realignment War:

//pulls cover off of map 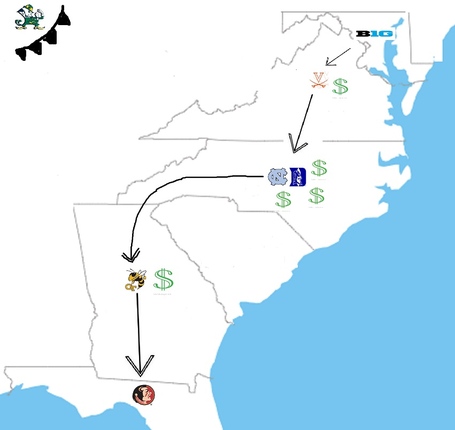 Wow...that's bold. Ohio. But what's that thing that looks like a weather front in South Bend? Ohio.

Well, once the destruction of the ACC is complete, Notre Dame will be effectively blocked and unable to maneuver, and they will forced into conference affiliation.

Hey, Kelly fainted again. Yeah, that's about how well it will go over up there. Suck it. CORPSMAN!

Piece of cake, let's go. You guys keep up with me, or we're all having a serious talk.

I was pretty sure you were going to have health problems and want to spend more time with your family, Urban. Sit this one out.

I'm gonna need a few extra million dollars to do that. But seriously, you're taking Duke?

Maybe. But while we're there, if we decide against it, we'll kill them off and send them to the Catholic League.

What are those dollar signs along the main lines of attack?

It's our secret weapon--the money bomb. It's the most powerful weapon ever designed by BTN scientists, and it will help me fulfill the Delany Doctrine.

No, jackwagon. The Delany Doctrine states that I will have the BTN on basic cable and satellite in every house in America, plus select cities in Canada and Mexico. Then, we go global--China, Europe, Africa. Basically, if a tribesman in Botswana wants to come back to his hut and watch Minnesota take on North Dakota in hockey, he will be able to do that.

THEY LIVE NAT GEO 24/7. How can you people not be a visionary like me? We may not have started the Realignment Wars, but by God, we will end them.

Well, actually, you did start the Realignment Wars by adding Nebraska and everyone flipping out after that.

Fine, whatever. I started it, and I'll end it.

I think the folks in the ACC are calling it the 'War Of B1G Aggression'.

Eh, fuck 'em. And don't interrupt me again. Ever. Or when we expand to outer Mongolia, you'll be coaching a team there.

Sorry General. So, tell us more about this money bomb. How does it work?

Pretty simple, actually. When we detonate a money bomb, it affects the entire way a University operates. It overpowers their coffers, blinds them with riches, and it allows me to DOMINATE THE WORLD OF COLLEGE ATHLETICS FOR ALL TIME. Mua...mua...MUAHAHAHAHAHAHA.

But wait a second. Ohio. Isn't the SEC developing a money bomb of their own? Ohio. And won't it be far more powerful than our money bomb? Ohio.

No. Their scientists haven't even fielded one of their own yet. They have powerful allies working to help them develop one, but they're still in the planning stages. But when they do field their money bomb, it will not have the power of ours. By this invasion into the South, we will be operating in their territory, making our bomb far more powerful than theirs. And then we can finally end this damn war, once and for all.

General Delany, I would love to lead the assault to end the war.

I don't think I've met you yet. Who are you?

How are your knees?

Great, no problem. Never had an issue with them, actually.

Well then, go for it. I heard you were a hard charger. Let's see what you got.

That never gets old.

No offense Bo, but the last two times you've been down South, I've drained my bank account buying stamps.

Oh, did you need to send personal notes of condolences for all the men he had killed under his command?

No. Letter of apology to bookies all across America because Junior Tactician here couldn't cover the spread. He's made betting on Nebraska about as attractive as Indiana football in general.

Hey, we're getting better. At least we're not Illinois.

General, if I may. This seems like a bold plan, and I must caution against it. This makes me uncomfortable, much like a productive offense does.

I would favor a plan that includes staying at 12 teams. Actually, maybe we would just go down to five or six. And outlaw downfield passes greater than 10 yards.

General, I would love to lead the attack towards Georgia Tech. I've had success against that state, in their own backyard, as recently as a couple of years ago.

Mark, I've thought long and hard about this attack. And I took your work into consideration, but I'm going to have somebody else lead that charge.

Son of a...it's Hoke isn't it? Or your beloved Urban Cryer, ISN'T IT? GOD, you've hated us FOREVER, and YOU'RE ALWAYS PLOTTING AGAINST MICHIGAN STATE. WE know you are, EVERYONE knows you are, SO WHY DON'T YOU JUST ADMIT IT?

Mark, the main reason you're not leading the attack is because you still have Dan Roushar as your offensive coordinator. Your army would be decimated on foreign soil in a matter of seconds if your defensive fortifications didn't hold.

He just left for the NFL. So what's your excuse now?

What are the message boards telling you?

Whatever I want them to tell me, Jim.

Well, Madame Cleo, are they telling you that you're still swimming in the deep end of make believe?

Well, no. I'd still like to lead the charge.

General Delany, I'd be honored to lead the attack.

Who the fuck are you? Are you even on my staff?

I'm Gary Andersen, the head coach at University of Wisconsin.

Hmmm, no, I don't think so. You seem far too nice, and you have yet to say or do anything that I can mock you for. That means I don't trust you. As for the rest of you, you're all lacking in one way or another. No, we need a field commander that is controversial, maybe a bit unstable, and someone who also has extensive experience in the South.

WOOOOOOO, The ZOOKER IS HERE TO SAVE THE DAY!

Somebody get that sonofabitch OUT OF HERE! As I was saying, we need bold leadership, and someone with a reputation for victory at all costs. Gentlemen, may I present a man who will lead this battle and end this war, once and for all---

...'sup? We attack at dawn. Are you sure we can't go through South Carolina? I had so much fun doing that the first time around.