The Big Ten at Ten talks mock drafts and the NFL Combine.

Share All sharing options for: Big Ten at Ten 2.26.13: Combine and Mock Drafts

Mock drafts are awesome. Why? Because they're almost never accurate and we still spend hours talking about them. They're fun. It's fun to hypothesize. 2013 is different from other years in recent memory because there doesn't appear to be a clear #1 pick. I've seen everything from Sheldon Richardson, Geno Smith, Luke Joeckel or Eric Fisher. The only sure thing is that the Chefs (yes, Chefs) have the #1 pick and need help at QB or OL. The problem is that there's no superstar QB and OL at #1 is often a risky selection.

Sites like WalterFootball, experts on NFL.com and ESPN have the Chefs selecting Luke Joeckel out of Texas A&M. The mothership has the Chefs making an interesting selection of Sheldon Richardson, defensive tackle out of Missouri. Despite the mothership's selection the general consensus is that Joeckel will be selected at #1. An offensive lineman at #1? HOW EXCITING. Here's a summary of where these sites have B1G guys at in the first round.

WalterFootball has the Minnesota Vikings selecting defensive tackle Johnathan Hankins, of Ohio State, with the 23rd pick due to the aging of Kevin WIlliams. They also have the New England Patriots selecting Kawann Short with the 29th pick to complement Vince Wilfork.

Bucky Brooks of NFL.com only has one B1G player being drafted in the first round: Jonathan Hankins, selected by the 49ers with the 31st pick. Then again, he also has Geno Smith going #1.

CBSSports has Hankins getting drafted by the Broncos with the 28th pick.

The mothership has Kawaan Short getting drafted by the Broncos...and that's it.

So yeah, not too many mock drafts are high on Big Ten players right now. 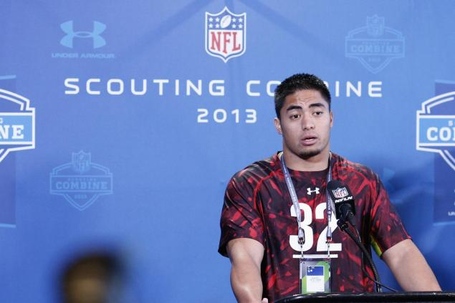 The BTN has a gallery of B1G guys of the NFL Combine.

Saturday's game against Nebraska will be the last game at the Hall for the seniors. IlliniHQ.

Inside 2 minutes, Iowa falters (this could be about football or basketball). Cedar Rapids Gazette.

Tom Izzo says it's OK to get upset but it's not OK to panic. MLive.

Big Ten expansion, who else and how many more? Corn Nation.

Short and Josh Johnson impress in the NFL Combine. Hammer and Rails.

Wisconsin is a rebounding juggernaut. They're also a juggernaut of having players with awful hair.