In defense of the flagrant foul calls

People need to stop complaining about these flagrant foul calls. The NCAA got this one right, and I'll tell you why.

Share All sharing options for: In defense of the flagrant foul calls

It seems that there are a lot of people up in arms over the NCAA's flagrant foul rule about elbowing people in the head. Even inadvertent elbows barely drawing contact are now resulting in a team getting two free throws and the ball. Almost everyone thinks that this is a bad rule. They argue that's its not fair and is ruining the game.

They couldn't be more wrong. The rule is keeping players safe and growing the game. I shoot down the seven most common arguments against the rule below.

Will this raise the amount of flopping in the game? Maybe, but flopping is so rare in college basketball that it won't have an effect on the outcome of games. I think that student-athletes are a cut above average drunken college students that lack morals and cheat on tests. Flopping is rare because the student-athletes know it is wrong to do it. In the extremely rare case in which flopping occurs, the flopper's teammates will help show him that flopping is not good for the game. In the rare case that a flopper doesn't listen to his teammates and stills tries to cheat the game, rest assured that his coach will bench him or suspend him. So I'm not worried about this rule encouraging flopping.

This is a common misconception that I have heard from a variety of sources. Since when did defenders not have a right get right up in players' faces when guarding them? Even if the defender uses his new freedom to bump the guy with the ball a little bit, it's not a big deal. When Dr. Naismith designed the game of basketball, he wanted it to be hard for the guy with the ball to move his arms, pass the ball or do anything else. The proper form that the good doctor taught for offensive players was to always have their arms fully extended above their heads, like a volleyball defender trying to get a block. Have you ever heard the phrase "It's all in the wrist"? That's how basketball was designed to work; hold the ball above your head and flick your wrists in order to pass or shoot it. The way ballhandlers have been moving their arms around willy-nilly is a bastardization of the original sport.

Argument #3. This rule leads to more defenders getting hit in the head with elbows, since they are emboldened by the rule to get in the ballhandler's face.

This sounds similar to the previous argument, but this one can be refuted by looking at the facts. The graph below shows the amount of times that defenders have been hit in the head with an elbow this season compared to last. As you can see, the rule is working because elbows to the head are less frequent this season. 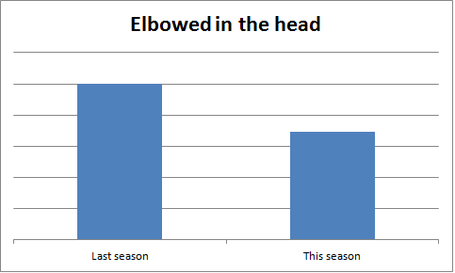 Argument #4: Coaches can tell the refs to stop the game whenever they want to look at the replay.

This is good for the game. Who gets paid the most in college basketball? The coaches. Since they get paid the most, they are the most important part of the game. The players are gone after a few years, but the coaches can stick around a lot longer. They are way more important than the players, so anytime the coaches can be more involved with the game, the better. The refs can't see everything and it's good that coaches, who are morally upstanding representatives of the universities, can help the refs.

Argument #5. The replays take too long and slow the game down.

I wish the people that used this argument would take the time to check their facts. As the below graph clearly shows, the games are getting faster due to this rule. Instead of multiple long timeouts to bring in stretchers for injured players, there are a few time outs to check for elbows. 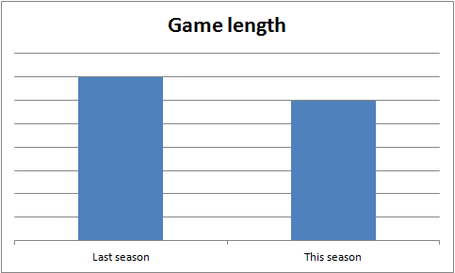 Argument #6. This rule might decide the outcome of the game.

This is a good thing. People say they want the game decided by the players, not the refs. Well this is decided totally by the players. A team can lose if they decide to play dirty by trying to move the ball a little bit with their arms not fully extended. Good. The team that cheats should be punished. If you don't agree with that, you're probably a cheater yourself, and I don't value your opinion.

Argument #7: Players aren't getting hurt as much and it makes the game less exciting.

I can't believe this argument exists, but I've been seeing it a lot on my twitter timeline recently. Here's an example:

I think this is a disgusting argument. I am for the least amount of injuries. I hope that no one dies while playing the game. If you think that basketball needs injuries to players in order to keep it interesting, then you need to pick a different sport (or check yourself into an insane asylum). I am glad the NCAA has instituted this rule to keep players safe, and I hope that they don't bow to the pressure and soften this life-saving rule.

I bet there's still some of you who think that this is a bad rule. You are wrong, but feel free to argue your position in the comments.