There's only one Big Ten team left in the NCAA Tournament.

Share All sharing options for: Big Ten at Ten 4.1.13: And Then There Was One

With the Ohio State men’s basketball team getting "shocked" by the Wichita State Shockers in the Elite Eight, there remains only one Big Ten team in the NCAA Tournament: The Wolverines of Michigan (who now have more playoff wins in Cowboys Stadium than the Dallas Cowboys). Michigan, whose path to the Final Four has been anything but easy, takes on the Syracuse Orange on April 6th at 7:47PM CT in Hotlanta. We can only hope their victories in Atlanta are as good as William Sherman’s were all so many years ago. Just don’t burn anything down, Burke.

Iowa is still alive in the NIT and plays future Big Ten team Maryland at Madison Square Garden tomorrow night at 8:00PM CT on ESPN2. The winner of that game will face the winner of BYU v. Baylor. You don’t care, do you?

Did Northwestern hire a coach?

LOLPHERS. Good thing Minnesota went "all in" on VCU head coach Shaka Smart, who signed a deal through 2023. Iowa State head coach Fred Hoiberg also signed an extension, every other coach named on the list of "possibilities" is probably going to sign an extension and Tubby Smith is going to get hired by Texas Tech. Minnesota also lost to Yale. In hockey. They play hockey at Yale, apparently.

Did you hear Steve Alford is now the head coach at UCLA? Yeah, he bailed on New Mexico after signing a 10 year extension…10 days prior to the announcement. The best part? There is (or was) a million dollar buyout as part of the extension that didn’t take effect until today. APRIL FOOLS, LOBOS! Now you hate him just as much as Iowa fans do. After multiple seasons of exiting the NCAA Tournament in the first round I’m sure Alford will be hired by the Miami Heat.

Did you also hear that the NCAA botched the Miami case? Thanks, Mark Emmert. What would you say it is you actually do here? On to the Big Ten links.

Illinois is hoping this typo is correct regarding Jabari Parker.

The Alford news counts as my Indiana news. They lost in basketball and don’t talk about football so this is what you get. Maybe if they wouldn’t have lost and messed up my bracket…

Ross from BHGP sits down (over the internet) and talks with the SBNation Maryland blog. The name of the blog is Testudo Times. Upon further research the testudo or "tortoise formation" was used by the Roman Legions and looks like this: 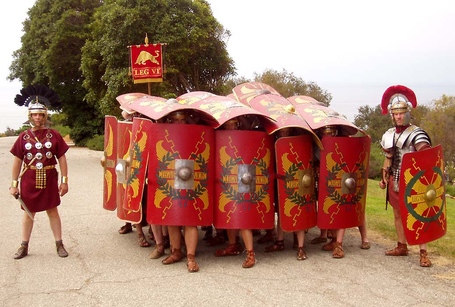 Tortoise formation? Terrapins? A terrapin is a species of turtle? I understand now.

John Beilein realizes a coaching dream by rebuilding Michigan and making his first Final Four. I can’t be the only one who thought Michigan was too raw to reach the Final Four, right? I sure do look stupid right now. As usual.

Michigan State’s starting RB candidates through the eyes of a defensive lineman.

Corn Nation previews the receivers and tight ends. I didn’t see Irving Fryar on that list.

With Duke’s loss to Louisville, the curtain opens on the Chris Collins era. Northwestern will have a press conference at 11AM CT to introduce the new Wildcat head basketball coach.

Experienced Nittany Lions will be ready to lead the Penn State football team this fall. Moxie.

They play hockey in Wisconsin.