In my early days of blogging, I penned a feature titled "Coach, But No Cigar," that began with the following preamble: "Everyone needs a good vice. For my part, there are few things in life more endearing than watching a Thursday night football game out on the front patio of my Victorian home with a cold micro-brew, a thick cigar, and the faint tingle of ragweed and honeysuckle in the air. There's something about the milky draw of a tightly-packed blend and a straight burn that begs contemplation. The cigar is a fixture of a lost era -- the days of sideline bowler hats, neckties, tweed blazers and real grass playing surfaces. The legendary Paul "Bear" Bryant used to pass out victory lonsdales to his Alabama teams after wins over rival Tennessee. There was even a Cigar Bowl in Tampa, Florida that featured smaller namesakes from 1946-1954 (although it can boast hosting the Florida State Seminoles in their first postseason appearance -- a 19-6 win over Wofford). And who can forget Lloyd Carr's simple, but triumphant walk into retirement after an unlikely 2007 Capital One Bowl upset of Florida. The consummate professional unbuttoned his collar and headed for the team bus with a bottled water and a lit Churchill in hand. (If you'd like to share a short story with Carr, he's rumored to keep a private locker at Smoky's in Ann Arbor). To invoke Freud, sometimes a cigar is just that. But when it comes to coaching, perhaps these simple products of hand and sunlight can tell us something about the flavor and personality of the game. John Galsworthy's famous observation, "By the cigars they smoke, and the composers they love, ye shall know the texture of men's souls," is not lost on this fan. It's been five years since we compared our beloved coaches to puros, and seeing how it is the offseason (when just about anything passes for content), I'd say it's time to take another crack at it.

Share All sharing options for: B1G 2013 // Coach, But No Cigar Anniversario

Entering his fifteenth season at the helm in Iowa City, Ferentz is far and away the longest tenured coach in the B1G. (For comparison, the next most experienced coach in the league is Northwestern's Pat Fitzgerald). What better cigar to pair with the dean of B1G coaches than one made by J.C. Newman, the oldest cigar maker in the United States? J.C. Newman has been a family operation for four generations, just like Ferentz's program. His son Brian, who started on the 2005 team is now an assistant coach, his son James plays on his offensive line, and his future son in law is on the football administrative staff. The mild-mannered No. 95 -- which just happens to be Greg Davis' target offensive ranking for 2013 -- isn't cheap, but neither is Ferentz whose contract will net him a minimum of $3.65 million per year through 2020.

Just like Jerry Kill at Minnesota, I want to see this cigar succeed, I really do. But every time I light one, the experience becomes largely forgettable fast; kind of like watching Gopher football. The Sumatran wrapper is a nice touch, but ultimately, there's just not enough flavor here to keep me interested, even on the links.

Keep the fat jokes to yourself, Brady loves the no-frills, big-ring Brioso, because it reminds him of his ideal o-line recruit. He can also relate to the 'sleeveless' bundle packaging. And so what if he calls the Honduran Jamastran leaf, 'Jabbastran' as a nod to his alter ego? At $3.95 a stick he's still got plenty of cash left to hit the Ponderosa. Or to buy glazed doughnuts for the entire student section.

Like this cigar's namesake, Pelini helped 'liberate' the Cornhuskers from the inhospitable Big Twelve. He also bears more than a passing resemblance to the dictator himself. But the real reason these coronas are Bo's cigar a la mode is their volatility: they can go from smooth cocoa to bitter tar notes in a split second.

In the spirit of Wilson's offenses, this cigar is shaped a little different. Even to experienced cigar smokers, seeing a 'pigtail' head and uncut foot can be a little unsettling. But Wilson knows that the only way to put his moribund program on the map is to think and smoke outside the box.

No question, Cohiba is a blue blood like the Nittany Lions -- but lately they've been getting by a bit on name alone. Fortunately, this 'pro style' label knows what it takes to win at the next level.

It's no coincidence that Gary Andersen's smoke of choice comes from the same label as Urban Meyer's. Anderson cut his teeth as defensive line coach on Meyer's 2004 Utah squad. Like the aged, sun-grown tobacco that makes up these fine instruments, Andersen matured under Meyer; and shows signs of his notoriously competitive DNA. Just like Meyer, Anderson has set up a practice grading regiment that produces winners and losers in every facet of the game. Of course, Anderson hasn't been at it as long as his mentor, and he lacks an elite resume; thus, his signature smoke is a lancero.

In the same way that Ashton cigars are an offspring of Fuente, Hazell is the protege of Jim Tressel which is enough to make him dangerous in the Big Ten.

Dantonio roams the sidelines with a brooding slump and a trademark scowl, just like the English Prime Minster who made this style famous. While the Cameroon wrapper is a tad vanilla, just like Dantonio's offenses, the Partagas boasts a solid backbone, and remains one of the most consistently well-regarded cigars on the planet. I like to think Dantonio leaves half-smoked cigars all around the locker room and lights them up in all their stale glory at halftime to ensure his demeanor remains depraved. 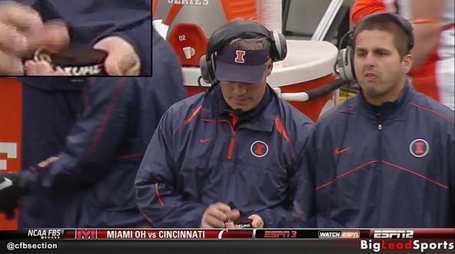 Because Illinois can't have nice things.

The winner of Cigar Aficionado's coveted Cigar of the Year award in 2008, this reasonably priced blend is a major overachiever, a la Fitz who has been doing more with less at Northwestern for seven years and counting. It's no surprise that Sporting News lists Pat as one of the top ten coaches in America.

When it comes to prestige, this stick is second to only the Montecristo No. 4. If you've had the pleasure of smoking one you understand why they're $30 a pop. Padron 1926s are lauded for their balanced creamy aroma, white ash and unparallelled consistency. Every cigar in the line has won big, just like Urban's teams, but the 40th Anniversary is particularly appropriate as a nod to Woody's tenure and the Ten Year War.

Thursday: Coach, But No Cigar Anniversario

Friday: What OTE Means To Me