Spring-ing to the Top: The Very Early Best of the Best Kickers in the B1G

Share All sharing options for: Spring-ing to the Top: The Very Early Best of the Best Kickers in the B1G

So now that we got through the Offensive side of the ball, I feel like now is an excellent time to do a little bit more Q&A to get you all up to speed and to really talk up the beauty that is Spring-ing to the Top. Obviously there are some very pertinent issues that need to be addressed that weren't answered in the first Q&A.

How are you coming up with these lists? It's almost like you, you know, don't watch football or something.

Excellent rehashing of a question, Mr. Nondescript Commenter. See, if you missed the first part of questioning, you would know that this is a conglomeration of the writers, pertinent statistics from the past few years, a Magic 8-Ball, and my cat. Surprisingly, none of those things are specifically tied to any of our writers actually watching football. Of course, with that said, we all do watch football and most of our lists generally reflect common sense and/or consensus.

Why are you doing the Kickers before the Defense? Are you actively avoiding commentary on Nebraska players? ARE YOU A HUSKER HOMER WHO DOESN'T EVEN WATCH FOOTBALL!?!?!

So uh, angry questions today. Anyhow, this is an easy question. In the B1G, there is one axiom that we all live by - Punting is Winning. And with that we bring you Kickers today.

Remember when you said you'd finish this piece during the Spring? You just took eight days off and I don't think you will. Also, I only want a little bit of content and that will be fulfilled by B1G | 2013. Why are you messing with me?!?!

First off, I definitely said I'd finish this thing as fast as I could, but it's actually a lot more difficult to get through 12 teams than one might think. I have Draft Boards and War Rooms, I've watched tape, I have a moc... wait, wrong sport and blog. Uh, basically I said this might be a work in motion and so it is. We will be scheduling B1G | 2013 mostly in the morning and these will drop in the afternoon. Now we have ALL THE CONTENT.

Hey y'all. I couldn't come up with something better on the fly and now that I have started, we're stuck with it. Sure, this piece is slowly moving out of the Spring, and sure this thing is now closer to, "Summertime and the Living's Easy: The Somewhat Less Early Best of the Best in the B1G," but that's just as much a mouthful, and I've curated this brand, and well, deal with it.

And with that, let's look at the Kickers. Just for the record, I am combining Punters and Place Kickers because I think that makes my job easier. I'm not 100% sure we can even do 5 of each.

Jeff Budzien is 25-30 for his career. More impressively, he went 19-20 last year with his only miss coming over 50 yards. Of course, I loved that miss, but I don't think you can blame the guy for it. In fact, I really think the only thing you can even critique Budzien for as a whole is that he has not hit a FG over 47 yards on his career, and he actually didn't have to hit from beyond 44 last year, so we're still kind of waiting to find out if he has the booming leg to be a difference maker on the next level. Still, the guy is good. Additionally, he has not missed an XP and is 101-101.

Chad says: Yep. Budzien. The guy missed one kick last year, from 50+ yards, by about 3 feet, which would have beaten Nebraska. That's it. He could get better, I suppose, but it's hard to be much better than Budzien was last year.

Yup, we now have a Spartan on the board. For all the reasons a person loves a Punter, Sadler is pretty great. He led the B1G eligible Punters in both average (43.3 YPP) and Punts per game. While that second stat is actually pretty stupid, it just proves how consistent he was. More interestingly, 40% of his punts have dropped inside the 20 yard line and 20% have dropped inside the 10, so this guy can coffin kick. Is he the greatest punter of all time? I don't know about that, but I can definitely say he is probably the second best kicker coming into this year. 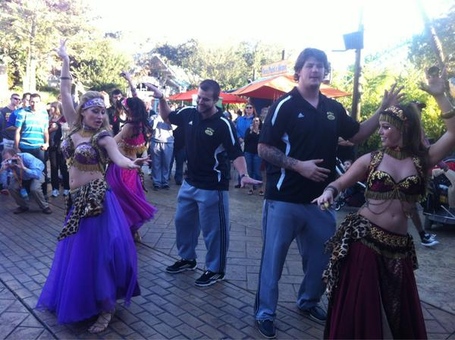 I don't like many Wolverines, but I do love me some Brendan Gibbons. Sure, that might be clouding my judgement and I might be overrating PKs here. Either way, Gibbons is the model case study in staying the course. His freshman year he was 1/5 making a 24 yard kick, Sophomore year he was 13/17 with a long of 43, and last year he went 16/18 with a long of 52. He's gotten better each year, and he rarely misses chip-shots. He also went 45/45 for XP last year, so yay free points! Really, for the crop that's returning, he's one of the best place kickers and has proven to be a weapon for the Wolverines. Also, "Brunette Girls."

He was 17/21 with a long of 50. That's good for second best percentage in the B1G to Budzien. He hit all 25 of his extra points... Wait, Iowa only kicked 25 extra points last season? Let that sink in for a moment... Yikes! So uh, at least he made all of them. Meyer gets this spot because I do think he has the talent to be one of the best this season. He proved he has a deep leg when Ferentz isn't being ultra-conservative and punting from the opponents 38, and Meyer did get better from his first to second year at Iowa. Can he be all B1G? Depends on how the Iowa offense is this year, but when it's all said and done he certainly has the skills to be the best.

Ewald gets this honor for being an extremely serviceable FG Kicker hitting at a slightly higher than 75% clip and a long of 49 yards. While those stats are just okay by any measurement, he does show his value by looking at his Kickoff numbers. Ewald had 31 kicks for touchbacks last season which was only second to Brett Maher (who is kind of a good kicker) and impressively has gone 4-7 on onside kicks. As an overall kicker, Ewald is pretty good. Also: Indiana probably is leading the conference in players on this list. I don't even understand.

We have a Purdue sighting everyone. Webster was actually a really difficult guy to leave off this list. In fact, there is an argument that you could switch he and Ewald pretty seamlessly, but like I said earlier - I'm overrating FGs a bit. Still, Webster averaged 42.3 YPP on 70 punts, and he sank 29 of those inside the 20. I would give you his inside the 10 stats, but finding punting statistics is like a needle-in-the-haystack-on-fire-in-the-middle-of-nowhere. Webster will push Sadler for Punter of the Year this year.