UM In The Final Four: What It Means To Michigan Fans

Out Of The Wilderness, Into The Final Four

Share All sharing options for: UM In The Final Four: What It Means To Michigan Fans

The Michigan Wolverines were not expected to make the Final Four. Remember when they were ranked #1? That seems like years ago. This exciting and somewhat miraculous Final Four run has taken the UM fan base by storm and showed just how far the Michigan basketball program has come.

I wanted to build on that excitement and get some reactions from my Michigan friends. So enjoy, and for you non-Michigan folks, at least tip your cap towards a program that sunk very low, only to pulled out of mediocrity by a killer coach, a commitment to facility improvement, and some top level recruiting. And Trey Burke. - graham

Not long after the nets were cut down in Arlington Sunday afternoon, the text messages and phone calls started rolling in. Some were from fellow Wolverines, reaching out to share in celebration. Others were from friends who were fans of other schools, reaching out to offer their congratulations. More than once, I responded by saying that at that moment in time, I was the happiest I've been in my entire life. I said it jokingly, but in truth, I wasn't exaggerating much.

I'm not sure if it was because it's been so long since the Michigan basketball program had anything to really cheer about, if it was because this tournament run was so unexpected, if it was the way everything unfolded - the comeback for the ages against Kansas highlighted by Trey Burke's miraculous 30-foot, shot-of-a-lifetime, the dominating, wire-to-wire shellacking of Florida in the regional final - or if it was a combination of these factors, but this tournament run has been one of the most enjoyable sporting moments I can remember.

What Michigan Basketball means to me and to the program:

Walking into Meijer the day before Easter, a friend and fellow Michigan grad was exiting. Jim looked at me, smiled and said, "Go Blue!" There was nothing else to say. From Facebook to phone calls, I have finally learned what March Madness is as UM alumni offer their take on our Basketball Program.

For me, our resurgent program means family time, school pride, and memories. The Mason Family of Five gathers around the Big Screen for Big Blue Basketball. I attended UM in the days of Bo and the 1989 Basketball National Championship. Since then, I have watched the Athletic Department and Coach Beilein rebuild this Program brick by brick - including a new Crisler Arena.

Michigan in the Final Four is a testament to hard work by the players, hours of coaching and scouting, and team character. A nationally relevant Michigan Basketball Program means better recruiting for all sports, successful student athletes on and off the court, and of course, the Michigan Tradition.

Those who stay will be Champions!

(Also the guy who wrote the "April in the D" song that always plays on Fox Sports Detroit. Only on OTE do you get these kind of celebrity appearances.)

The Final Four's significance to this program cannot be understated. Michigan's basketball renaissance has been a long time in the making, and is no accident. They hired a successful coach, updated the facilities, recruited the talent, won some games, got the national exposure, sent some players to the NBA, recruited more/better talent, won more games, and capped it off with a trip to Atlanta. Dave Brandon and John Beilein have done a spectacular job of building, marketing, and getting players to buy into this program. College sports are a prime example of success begetting success, and Michigan basketball has officially re-entered that "circle of life" for the first time in a long time. The future is bright!

Here in Ann Arbor, the one and only factor that can negatively affect the mood on campus more than a bad test grade is a bad day of sports. We've survived (barely) through the Rich Rod era, and been on the wrong end of the basketball spectrum for some 20 years now. All in all, this final four run has been the best thing to happen on campus since the firing of Rich Rod. And it's only fitting that the weather is getting better in the midst of this legendary run. Every time you turn on a TV, you see the maize and blue, and Trey Burke's "shot." The pride of seeing your school being the talk of the tournament is something that cannot be explained. The feeling outweighs the Sugar Bowl victory AND beating Michigan St. on a last second field goal, combined.

I've actually been getting texts congratulating me on this tournament run, as if I was a part of the games. Crazy enough, it actually feels like we are all a part of this run. Spirits are high, the campus is alive, and basketball is on everyone's mind. On the night of the comeback win against Kansas, people were roaming around campus screaming "TREY BURKE," which started a wave like reaction of people shouting his name back and forth. This final four run means everything for the program, and we can only hope that it ends with a national title. Michigan basketball is back in the spotlight, right where they belong. #GoBlue #GodBless 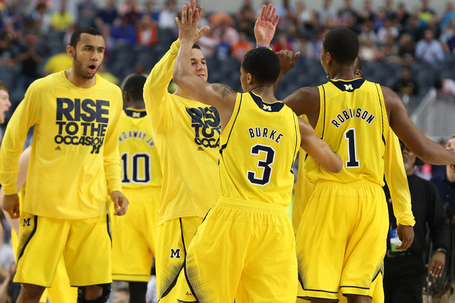 This Final Four run is incredibly special for my family; it's something my three boys have never seen before. They really have no memories of rooting for a good Michigan basketball team. To overcome what we've overcome in the last 17 years, to get here, makes it even more special. My wife and I have tickets for something Saturday night, I think I've forgotten to tell her that whatever it is, I will not be attending.

To every Michigan fan, this final four is special. For the program, it shows that they have risen from the ashes. This was a program that had been tarnished by sanctions and been humiliated by having to remove the coveted final four banners of the past. This team has given new hope to Michigan fans and alumni. I have been a Michigan fan all of my life and am fortunate to call myself an alumnus. When I was young, I remember hearing stories about '89 (the birth of the "Michigan Man") and recall bits and pieces of the performance of the Fab Five. They weren't my team, though. I was too young and didn't understand. This Michigan Basketball team has given a new generation of fans excitement and hope for our program. Win or lose it has been a run for the ages. With pride we hail, GO BLUE!

I think I am still processing everything. Once Michigan made the Sweet Sixteen and was facing the number one seed, Kansas, everything else felt like playing with house money. Michigan was good and seemed to be catching fire at the right time, but this was still the same team that managed to lose six of its final 12 games before the NCAA tournament and wasted a golden opportunity to capture a share of the Big Ten title for a second straight year.

Then the Kansas game happened. I didn't sleep much that night. I just floated around the house in a daze after it happened. I didn't talk to anyone or scream or yell. It was so improbable a comeback that I actually started writing a dour, whiny post game column well before the game ended, only to keep writing it in solemn tones even as I hoped Michigan would make its run. I didn't want to jinx it, after all. From there Michigan destroyed Florida in one of the most complete basketball games I have ever watched between two really good teams -- and the single best game I've ever seen Michigan play in my life.

I have been a Michigan basketball fan my whole life. In fact, it was probably basketball that drew me more toward Michigan early in life than football, as I was a basketball player at heart. I've had season tickets, gone to NIT games, rooted for everyone from Robert "Tractor" Traylor to Manny Corperryale Harris, and waited for the day Michigan basketball was anything but a punchline. I'm not quite old enough to remember the last time Michigan was this successful with anything other than memories appropriated from other people. But I've been through the desert. I know what all the losing and failure and wasted potential feels like.

Now I get to feel this. So I'm going to stay locked in my own head a while longer, replaying the moments from this run over and over. Win or lose this weekend, Michigan basketball has just provided me with the two best weeks of fandom I have ever experienced. I'll figure out how I feel later. Right now, I'm going to enjoy every goddamn second of this with the knowledge that these things don't happen everyday, and that I've been waiting for this moment practically all my life.