ICYMI 4.3.13: March Madness and Spring in the Wings

Share All sharing options for: ICYMI 4.3.13: March Madness and Spring in the Wings

Good morning everyone. Before we move on too far, let's all take a moment to stand and applaud the Iowa Hawkeyes who give the B1G a chance to sweep both the NIT and NCAA tournament (so long as Michigan keeps going forward of course). Last night's win over a feisty Maryland team was another sign that Fran has the Hawks on their way forward. I am of the belief that this team could have been a Sweet 16 team with the right draw, and they are definitely playing their best basketball right now, which is a plus considering it's one and done tournament time. It is also worth noting that this will be a B1G matchup soon, which is super weird, huh? Anyways, for your reading pleasure on the NIT, here is BHGP and Testudo Times on the wrapups.

As for the week that was on OTE? As you might imagine, it was pretty basketball heavy as we went from the chance at an #ALLB1GEVERYTHING Final Four to rooting for Michigan. Pretty short week on subject matter, but with fewer games going on in basketball and the fringes of Spring Football starting, that is bound to happen. Still, here is what you missed this week.

Note: Again, if anyone wants to write fanposts about the non-revs, go right ahead. I know gymnastics, outdoor T&F, baseball, softball, and most likely a cavalcade of other sports have fans, and I would love to get those highlighted. Or, if you'd just prefer to rant about how Devin Gardner is super overrated, that would be a great spot for some discussion. I am daily impressed by our community and I think the fanposts would be a good spot to see this whole thing grow even more.

In Defense of the Flagrant Foul Calls - babaoreally

I don't know what makes this more entertaining. The graphs (which are awesome), this line: "The way ballhandlers have been moving their arms around willy-nilly is a bastardization of the original sport.", or the fact that people had trouble deciphering baba's seriousness or lack thereof. Nonetheless, this was a pretty awesome piece. Of course, I think most pieces are awesome because that's what I do - celebrate awesome - so take that for what it's worth.

It must be nice rooting for a school with both a football and basketball history. But seriously, Michigan fans were hoping this team would live up to its early season potential and not fall into the traps a young team generally does. This team has exceeded expectations - minus that whole first 35 minutes versus Kansas - and is on its way to the Final Four to face down the Syracuse Zone.

And so it begins. With Spring football afoot, I thought it would be good to get the OTE staff thinking about and talking about football. This is our stab at probably the easiest position to rate overall. Right now it's Braxton and T.Mart and then a bunch of guys battling for respect even though we don't know all that much about them. I am guessing our predictions of Colter, Gardner, Indiana Contingency won't be too far off, but it will be fun to see how Spring plays a part in things.

Finally, the Final Four: What It Means to UM Fans - Graham Filler

This dropped this morning and UM fans and non-UM fans can appreciate the feelings a fan, like we all are at the end of the day, feels like after a big win. Congrats to the Wolverines and know that I am rooting for you all the way at this point. I mean, of course I might not feel too bad if Wichita State won either, but that's mostly because I could make jokes about Wichita State being the best team in Kansas for a while, which would be totally fun.

- He wants to throw for 70% or better, has been working on his mechanics and decision-making and has mastered what James Vandenberg never could: the audible.

- Thanks, Mark Emmert. What would you say it is you actually do here? 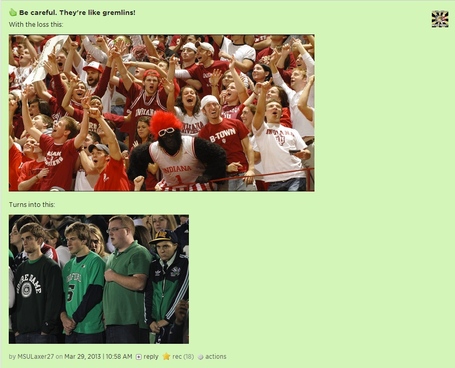