Keeping the B1G previews rolling by spewing out a few self-destructive thoughts about the Iowa Hawkeyes in 2013.

Here at Off Tackle Empire we don't have scheduled recaps for each Big Ten football team's season. In Iowa's case, we don't have scheduled autopsies for their season(s). For that, I'm thankful. Record-wise, last year was Iowa's worst season since 2000. Emotionally, last year was Iowa's worst season since 2006. We should have seen it coming when Iowa struggled against a MAC team in week one at Soldier Field (Yes, NIU made the BCS...they're still a MAC team) but we played it off as "opening week jitters." When Iowa fell to Iowa State at Kinnick Stadium we said "Well, we're Iowa State's Super Bowl DURRRRRR." When Iowa fell was shocked by Central Michigan we said "Well, that's just a fluke and GOD DAMMIT KIRK FERENTZ SPECIAL TEAMS @$#%!#$^."

Our denial was only solidified by the Hawkeyes thrashing Minnesota 31-13 and (rightfully) taking back the Floyd of Rosedale. It was like every insufferable moment we'd experienced earlier in the season was exercised by one simple play:

The charade continued when Iowa surprised the Spartans in East Lansing after double overtime. So when the Nittany Lions rolled into town the general consensus was we "we think we got this." The Hawkeyes faced superior Penn State teams in the past and dealt with them accordingly. Besides, it was the black and gold game under the lights in Kinnick. What could go wrong?

When Matt "Excessive Moxie" McGloin rushes for more yards than your entire offense you know there's a problem. Or problems. Iowa finished the season with five straight losses for the first time since 1999 and had you wondering how they'd even won four games in the first place. Some losses, like those against Northwestern and Michigan, were embarrassing. Others, like every other game, were downright excruciating. But it's a new day. So let's go right ahead and pretend that 2012 didn't even happen...

Wait, 2012 happened and I have to keep talking about it? DAMMIT. Well if we're talking about the good there's two things I would classify as good about last season.

First, Iowa found its running back(s) of the future. Sophomore Damon Bullock kicked off the season by rushing for 150 yards on 30 carries against NIU and averaged 4.3 YPC in three games before AIRBHG struck. In his absence, newcomer/fullback/worldeater/freshman Mark Weisman rushed for 623 yards in four games...before AIRBHG struck. Naturally, neither back was able to stay healthy for the remainder of the season and things went to absolute hell but that's besides the point.

Second, Iowa's kicking situation was consistent for the first time in years. Junior Mike Meyer went 17-21 with three of those misses being 40+ yard attempts. He was also perfect on extra points (Iowa gave him a whole 25 opportunities) and a semi-finalist for the 2012 Lou Groza Award.

That's it for the good.

Nearly everything else. Angry Iowa Running Back Hating God still looms large made an impact before, during and after the season. Mikail McCall transferred, Marcus Coker transferred, Jordan Canzeri suffered a torn ACL, De'Andre Johnson was dismissed from the team, Barkley Hill tore his ACL, both Bullock and Weisman were injured during the season, Greg Garmon transferred and Andre Dawson and Brad Rogers retired. Sure, Iowa found its running backs of the future but only because it had to. How many times are we going to do this? Forever, apparently.

There was also the James Vandenberg debacle that I'll absolutely refrain from talking about because it will only get me upset. 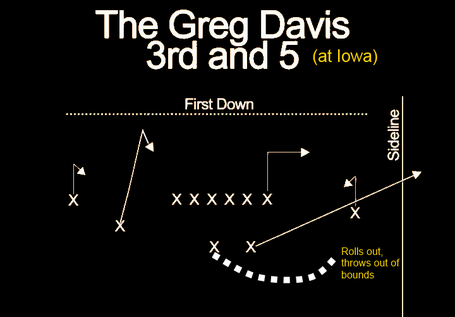 Senior quarterback in a new system + lack of talent at wide receiver + routes averaging 2.3 yards = a donkey show. Was it as bad as it looked? Yes. Is Greg Davis a failure? It's only been one year but when you finish the season ranked 101st in rushing offense, 99th in passing offense, 114th in total offense and 111th in scoring offense things aren't exactly encouraging.

Now, some fans are happy to see a few of those guys moving on. Regardless, they're starters.

So yeah. In a nutshell that was 2012 Iowa football.

On The Offensive Side of the Ball

As previously stated: Iowa has its running backs. Mark Weisman is a sophomore, Damon Bullock is a junior and Jordan Canzeri is fully healed. According to Marc Morehouse, there even appeared to be competition between the RBs during spring practice. Strength in numbers at RB? Competition? This is too good to be true! (It is).

Arguably the deepest position on the 2013 Hawkeyes is tight end. They have 7 (seven) tight ends on scholarship and only one is a senior: 6'7, 265 pound C.J. Fiedorowicz. BHGP calls him "The Polish Hat" for obvious reasons. I call him "First Contact" because he falls down on first contact. Regardless, C.J. is in his final season and wants nothing more than to show he has the ability to make it to the next level. Second on the depth chart another former 4-star recruit who checks in at a measly 6'5, 247 pounds: Ray Hamilton. There's also Henry Krieger-Coble, Jake Duzey, Ike Boettger, George Kittle and Jon Wisnieski who have an average height and weight of 6'4, 236 pounds.

The Hawkeyes need someone to throw and catch the ball. James Vandenberg went out with a whimper and despite his struggles another quarterback did not see a single snap. No, even when Michigan was pushing rope against Iowa in the fourth quarter Vandenberg was still out there throwing the ball. No other team in the FBS used only one quarterback all season (thanks, Marc Morehouse for that tidbit).

That decision concerned me. Why wouldn't another quarterback get the nod when Vandenberg was woefully ineffective and regressing as the season progressed? Were they not ready? Were they inexperienced? Were they just not good enough? Whatever the answer, Iowa still didn't see a different quarterback last season and enters 2013 with a starter who hasn't thrown a pass since ever: Jake Rudock.

Rudock is a 6'3, 200 pound sophomore who redshirted in 2011 and (obviously) rode the pine in 2012. He was Vandenberg's assumed successor because there wasn't anybody else. Chris Weinke moved to punter (LOLWUT) and Cody Sokol and C.J. Beathard redshirted so Rudock figured to see some garbage time action. But that didn't happen and Iowa has a full on quarterback competition in 2013.

The problems continue at wide receiver. Keenan Davis, whose career also came to an inauspicious close graduated and left Jordan Cotton as the only senior wide receiver on the 2013 spring depth chart. Tevaun Smith, Jacob Hillyer and Kevonte Martin-Manley are all sophomores. Martin-Manley, who we abbreviate "KMM" because it's a whole lot easier first made his name against Pittsburgh in 2011 by doing this:

Despite running the Tire Fire Offense in 2012 KMM managed to lead the team in receptions and averaged 11 YPC. Others, like Cotton, had flashes of glory (see the flea flicker video) and disappeared as the season progressed. While Iowa fans are optimistic about the speed of Tevaun Smith and the size of Jacob Hillyer the experience simply isn't there. Success at wide receiver hinges upon the performance of Jake Rudock so there are zero guarantees this fall.

On The Defensive Side of the Ball

Iowa returns its entire linebacker core in Christian Kirksey, James Morris and Anthony Hitchens. All three are seniors and all three led the team in tackling, interceptions and fumble recoveries last season.

Iowa's linebackers had such high marks in every statistical category because the defensive line was totally ineffective. On one hand the Hawkeyes lose two starters in Joe Gaglione and Steve Bigach. On the other hand...the guys replacing them are more talented. Sophomore Drew Ott was named Nebraska's Gatorade POY back in 2011 and is currently Iowa's No. 1 at left defensive end. Starting left defensive tackle Darian Cooper had offers from nearly every school in the Big Ten. Junior right defensive tackle Carl Davis is an absolute monster at 6'5, 310 pounds. Returning starter Dominic Alvis is good but really (REALLY) small.

The secondary has guys who have seen a good deal of game time but still need to work on their mechanics. Nico Law, who Iowa fans (for some reason) liken to Bob Sanders missed tackles because he was too interested in lowering the boom. Tanner Miller was a walking "wow, he was really out of position on that play" comment. Micah Hyde graduated leaving the corner opposite of B.J. Lowery up for grabs. Sophomore Jordan Lomax is listed as the starter on the Spring depth chart but hasn't seen any action since 2011 due to a torn labrum last season. Listed behind Lowery and Lomax are Maurice Fleming and Sean Draper, a freshman and sophomore respectively. So should either corner struggle it's not like there's an experienced player who can step up and take charge.

Kicker shouldn't be a problem as Mike Meyer returns for his senior season. His aforementioned numbers are sure to hold steady or improve assuming that Greg Davis doesn't call a three yard out on a 3rd and 5 every single series (he probably will).

Iowa also returns their starting punter in sophomore Connor Kornbrath who can only get better with the departure of Chris Wienke. Kornbrath, who didn't exactly knock anyone's socks off with his 37.9 average, will be Iowa's unquestioned full time punter.

Micah Hyde's graduation seems like a negative at punt returner. On the other hand Iowa can now field a punt returner who will actually return punts. Who will it be? Bullock, KMM or [random defensive back] are candidates.

Jordan Cotton is embedded at kick returner for the Hawkeyes and is unquestionably the right man for the job.

/Melancholy and the Infinite Sadness

Iowa gets NIU, Michigan State and Northwestern at home. They'll be underdogs in every game (yes, even against NIU) but they've got a better shot at winning than on the road. Though the games against Wisconsin and Michigan are likely losses I'd rather they were played at Kinnick.

Iowa won't win a road game. They travel to Ames, Minneapolis, Columbus, West Lafayette and Lincoln. Every one of those teams is better than the Hawkeyes right now and it's best that we don't even watch the Ohio State or Nebraska games.

If You're Talking to a Hawkeye Fan:

Did I mention the Floyd of Rosedale? WOOOOOOOOOO: 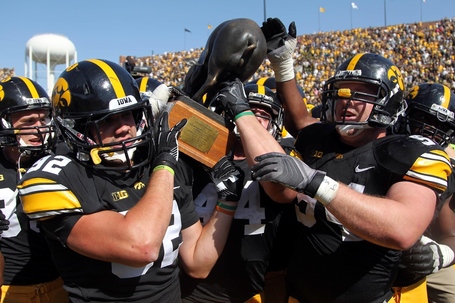 Special thanks to Hook 'Em Report who I believe is responsible for the original "Greg Davis 3rd and 5" image that I modified half-assedly.