A sad Iowa fan struggling with being hated reaches out to the smiteful one to ask why everyone hates Iowa so much.

Share All sharing options for: B1G 2013 // Keeping the Enemy Close: "Are You There AIRBHG? It's Me, Margaret." 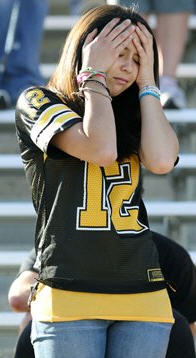 This is Margaret. She is a sad Iowa fan. Why is she sad? To understand that, you must first understand her life.

Her father is an Iowa State alum and her mother is a high school dropout who has been wearing Dollar General brand Iowa gear for as long as she can recall. She's a chemistry major at Iowa State, because her dad always told her to look for careers in growing fields and no line of work is exploding faster in Iowa then meth cooker. She's proud of herself because she's looking forward to using her degree in an applicable field instead of paying for a liberal arts degree and then working in the food service industry like her friends who go to Coe. And like many Iowa State students she's a proud Hawkeye fan. This greatly annoys her father, delights her toothless mother, and means she still has something in common with all of her friends who are going to school at Northern Iowa. The Iowa fans reading this are now confused because Margaret sounds just like them. But if they'd simply give OTE a few more minutes to load this story (56K modems are not known for their speed) they'd understand.

Margaret is sad because she hides a terrible secret. She doesn't know what to believe anymore. She grew up believing that everyone from Iowa, even people who go to ISU, could be Iowa fans. It didn't matter if you couldn't point out Iowa City on a map, as a resident of the state of Iowa it was your god given right to claim the University of Iowa as your own. It's was a unifying thread in the lives of Iowans; something that allowed them to escape their bland meaningless lives in the state time forgot or make them feel superior to anyone they were jealous of. This always made sense to her.

The problem was, as time passed she came to realize that loving the University of Iowa means a lot of people hate your team. Not just Minnesotans in their funny winter hats and city clothes, but fans from across the Big Ten (minus the salt of the earth residents of the best neighborhoods in Chicago – Naperville, Joliet, and Elgin). And as she found out when her father taunted her following yet another lucky win by the Cyclones this past season, even fellow Iowans hate the Hawkeyes.

Seeing the HATE coming from all sides was tough for Margaret. However the thing that really shook her to the core was realizing that there was even a deity who reveled in tormenting her team. At first some of her fellow Hawkeye fans at ISU told her it wasn't real. That it was just a story to scare all the meth addicted Hawkeye fans into behaving a little better in public. She chalked up all the running back injuries to bad luck. "Iowa Football is the best thing in the whole world!" she'd tell herself. It was the Truth, after all, everyone in Iowa thought so. There was no way that any god or mystical being would oppose such a wonderful thing as Iowa Football. But then she saw the most rabid of her kind holding festivals and performing rituals designed to sate the Vengeful One's hunger for running back related carnage. If the Angry Iowa Running Back Hating God weren't real, then why would the followers of the Cult of Batshit Insanity do such things? And if he were real, why were they selling false idols and provoking him further. It was all so confusing.

There was only one explanation. AIRBHG was real. Once she'd stopped crying over the realization, she forced herself to ask the questions that had been lingering in her mind for years..."If the Hawkeyes are so awesome, why do so many people hate them? And why is there a wrathful omnipotent figure hell bent on sabotaging our football seasons?" She knew there was only one thing to do. She had to talk to god. Not one of the god's worshipped by the major religions of the world. She had grown up in Council Bluffs, and everyone who grew up living in Council Bluffs knew that it was proof that the normal religious gods did not exist. No, she would need to pray to an immortal being with real power. She needed to pray to AIRBHG.

Are you there AIRBHG? It's me, Margaret.

WHO DARES SPEAK MY NAME?

This humble Iowa fan does oh smiteful one. I wanted to ask you why hate and running back obliterations are allowed to happen to the best football program ever in the entire world?

REALLY? IS IT NOT OBVIOUS TO YOU?

No, and it has me so confused. I thought I was living a good life. I greet everyone I meet with "Go Hawks!", I call Ames "LAmes" even though I go to school there, and I consider an act of vandalism and poorly thought out attempted theft to be one of the proudest moments in Iowa history. But the more I look around, the more I realize that people seem to hate Iowa. Even our leaders have abandoned us, locking in that overpaid dinosaur Kirk Ferentz into a gold plated contract. Sure, Barta tries to pretend he's still one of us by prank calling Jamie Pollard all the time but I'm really starting to wonder if he truly believes in Iowa football the way...

YOU HAVE BEGUN TO RAMBLE. MY TIME IS PRECIOUS. I AM IN THE MIDST OF PREPARING MY NEXT TORMENT FOR ONE OF YOUR PRECIOUS RUNNING BACKS. YOU HAVE FOOLISHLY TRIED TO SHIELD HIM BY CALLING HIM A FULLBACK. YOUR UNCEASING PRATTLING ONLY SERVES TO ANGER ME FURTHER.

Please, not Mark. He's so dreamy in a walk on kind of way. Can't you just explain all this Iowa hate to me instead?

PEOPLE HATE IOWA BECAUSE TOO MANY OF YOU ACT LIKE BEING A HAWKEYE MAKES YOU SPECIAL. THEY HATE IOWA BECAUSE EVERY TIME YOU LOSE A GAME YOU SHOULDN'T THERE ARE ALWAYS EXCUSES. NEVER ENDING EXCUSES. THE WHINING FROM THE 2005 IOWA STATE LOSS FUELED MY RAGE FOR YEARS.

But the Hawkeyes have such a proud history. Did you ever hear that we beat Minnesota 55-0? And that Brewster was so embarrassed that he personally printed the following season's media guide on a mimeograph so that he could omit the game from it's pages? And that we once stole their goalposts?

(/LOUD THUNDERCLAPS CAN BE HEARD AS AIRBHG LAUGHS)

PEOPLE FROM OUTSIDE IOWA DON'T REMEMBER 55-0. THEY ONLY RECALL 2 OF YOUR BROOD FORNICATING ON A BATHROOM FLOOR. AND NOT JUST ANY BATHROOM, A MEN'S BATHROOM AT THE METRODOME. DO YOU HAVE ANY IDEA HOW MANY PACKER FANS HAVE POOPED ON THE FLOORS IN THOSE THINGS? THEY STILL HAVEN'T LEARNED THAT THEY ARE CAPABLE OF DEFECATING IN A MANNER DIFFERENT FROM THE COWS THEY GET THEIR CHEESE FROM.

AND DON'T GET ME STARTED ON THE GOALPOSTS. TEARING THEM DOWN WAS A BOLD BIT OF TROLLING. BUT RATHER THAN LEAVE ON A HIGH NOTE YOUR WALMART BRAND ENGINEERING MAJORS TRIED AND FAILED TO GET THEM OUT OF THE STADIUM. AND TO THIS DAY THE REST OF YOU PUFF YOUR CHESTS OUT WITH PRIDE LIKE YOU WERE ONE OF THE RINGLEADERS.

It's Minnesota though! We're so much better than them!

YOU SHOULD LEARN NOT TO QUESTION YOUR BETTERS. THE KINGS OF CHICAGO ARE SIMPLY PUT OFF BY PEOPLE FROM DEKALB GOING TO IOWA AND CLAIMING THAT THEY ARE FROM CHICAGO. ALSO, NORTHWESTERN HAS LEARNED THAT IN ORDER TO CREATE A BETTER BREED OF BUTLER AND CHAUFFEUR, THEY MUST FIRST BREAK YOUR SPIRIT BY BESTING YOU ON THE FIELD OF BATTLE.

But what about you? Why would a powerful being like yourself want to harm something as great as Iowa football?

THERE ARE MANY REASONS, BUT I FIND MYSELF DRAWN TO TORMENTING YOU MOSTLY BECAUSE THE SMELL OF YOUR STATE AND THE ARROGANCE OF KIRK OFFEND ME. I DON'T UNDERSTAND WHY YOU MUST STORE SO MUCH PIG FECES EVERYWHERE AND WHY YOU GAVE SUCH A HUGE CONTRACT EXTENSION TO A MAN WHO FINDS MODERN OFFENSIVE IDEAS TO BE TOOLS OF THE DEVIL.

WHICH IS PREPOSTEROUS. THE DEVIL AND I ARE FRIENDS. THE TOOLS OF THE DEVIL ARE ESPN'S INFATUATION WITH THE SEC AND SKIP BAYLESS.

So what can I do? I don't want to be hated but being a Hawkeye fan means that the Hawkeyes are the only thing we care about. If I'm not a Hawkeye fan, how will I feel automatically superior to everyone else in the Big Ten?

BECOME AN INDIANA FAN. NO ONE HATES INDIANA AND BEING AN INDIANA FAN MEANS YOU AUTOMATICALLY RECEIVE ALL THE BENEFITS OF BEING A NOTRE DAME FOOTBALL FAN. INCLUDING A SMUG SENSE OF SUPERIORITY AND A UNHEALTHY FETISH INVOLVING FOOTBALL INDEPENDENCE.

Thanks so much AIRBHG! You're not nearly as bad as everyone in Iowa says.

ER, YOU'RE WELCOME. NOW GO DO SOMETHING USEFUL AND MAKE ANOTHER BATCH OF METH FOR YOUR FRIENDS.

Months pass. All of Iowa's running backs have perished in freak silo explosion and Notre Dame is losing to Michigan while Brady Hoke taunts Brian Kelly by doing the chicken dance.

I've realized there is something worse than being an Iowa fan...being a Notre Dame fan. I hate you AIRBHG.