You've been waiting a whole year, and now it's time! Off Tackle Empire's B1G 2013 Purdue week! Wait, where are you going? Please come back and read the preview.

The Danny Hope Era is over. Last season wasn't a complete disaster, but it was pretty terrible. Purdue managed to wring out six wins in 2012 and then get demolished in a bowl game against Oklahoma State.

Keeping the Purdue Cannon and Old Oaken Bucket rivalry trophies was a highlight of 2012, especially if you don't think about how bad the teams it beat to get them were. The Boilers also rolled into Iowa City and took home a road victory in the OMHR series for the first time in something like 20 years. Of course Iowa lost to Central Michigan and Indiana last year, so that's not much to brag about.

It was also the first (and last) season that the Boilers won three non-conference games under Danny Hope, so Hooray!

The three home losses (to Michigan, Wisconsin and Penn State) were three of the four worst losses I have ever witnessed in person. While none of these were as bad as the 2011 Notre Dame game, they were absolutely awful to watch. Michigan, who hadn't looked good coming into the game, scored at will. Aside from the first two plays against Wisconsin, that game was an abomination. The Badgers, who had trouble running the ball early in the year, racked up 467 yards on the ground. The game was also played in a downpour and there were probably fifty or so fans there with me at the end of it. And the Penn State game was more of the same. Purdue was inept offensively and bad defensively. A classic Danny Hope timeout to extend the game by one play led to the Boilers only touchdown as time expired.

The two most frustrating games were against Notre Dame and Ohio State. The Notre Dame game wasn't too bad, but Hope should have kept Marve in the second half because he had the hot hand. That was always his justification for sticking with two QBs, but he kept a rotation going instead. The Ohio State game was great until it wasn't. After two straight embarrassing games at home, Purdue inexplicably bounced back and took control at The Horseshoe. The Boilers had the lead and just had to do something other than play terrible prevent defense, or get one first down at the end of regulation.

The Minnesota game was the most disappointing game of the year. At least the teams that beat the Boilers at home were good. Minnesota was pretty mediocre last year. That matchup should have been pretty even. Purdue was coming off a tough loss at Ohio State. Instead of carrying some momentum over from competing with a great team, they came out and let the Gophers score 34 points in the first half. To put that into perspective, the Killbots only scored over 34 once for a whole game last season (other than the Purdue game). They had a 3OT game where they only managed 30. After that game, Purdue would have had to sweep the rest of the season, including the bowl game, for Hope to have kept his job.

I stopped watching the Heart of Dallas Bowl game pretty early on. That was pretty embarrassing, but not surprising. Oklahoma State was a good Big 12 team that was passed over for better bowls. The PSU and OSU sanctions led to Purdue playing up a couple of spots, and a 58-14 blowout was the result.

The head coach is not talking about using multiple non-Wildcat QBs. This is a gigantic improvement over the past couple of years. Senior Rob Henry is known more as a runner, and he has finally been healthy for a couple of years. If he can't cut it, Freshman Danny Etling looked pretty good in the Spring, and Redshirt Freshman Austin Appleby isn't a bad third choice.

Akeem Hunt returns after a good season, and he has added some weight. Hopefully he can withstand the hits and turn into an every down back who can wear down the defense. Raheem Mostert has mostly been effective as a kick returner, but he has the speed to see more playing time at either RB or WR. Brandon Cottom is a big guy who is pretty fast for his size. You could see him lined up as a fullback this season.

Gary Bush, Charles Torwudzo and Dolapo Macarthy bring some experience back at the WR position, and BJ Knauf and Danny Anthrop could contribute if their hands can match their speed.

The main cause for optimism isn't really the personnel, it's the change in coaches. While some fans aren't happy with the selection of John Shoop as OC, he will be an improvement. Look for Purdue to run more of a pro-style set and not rely on 3000 bubble screens a game.

The Boilers weren't good on offense last season, and they lose a lot of experience this season. Both of their starting quarterbacks, their top wideout Antavian Edison, and top running backs Akeem Shavers and Ralph Bolden are gone. OJ Ross, who has shown potential, is suspended and it doesn't sound like he will be on the team next year.

The new coaching staff has some returning talent to work with. Ricardo Allen, Frankie Williams and Landon Feicther had some good moments last season in the secondary. Bruce Gaston and Ryan Russell are pretty talented returning line players who should be able to put some pressure on the opposing QBs.

The defense wasn't really that good last year against good offenses (and Minnesota). While the secondary managed to get a lot of interceptions, the defense did a terrible job against the run and weren't impressive against the pass aside from the interceptions.

The linebacking corps was thin last year, and it looks to be an issue again this season. Will Lucas and converted QB Sean Robinson need to improve to help shore up the middle of the defense.

As far as personnel losses go, Josh Johnson always seemed to come up with big plays out of the secondary against bad teams and was a decent punt returner (he usually caught the ball). Kawann Short's pass rushing will be tough to replace; he was good enough to be a second-round NFL pick.

Speedsters Raheem Mostert and Akeem Hunt are back to return kickoffs, a spot where the Boilers have been pretty good. Senior Punter Cody Webster is coming off of a pretty good season.

The kicker position is still up for grabs, after inconsistent results from Paul Griggs and Sam McCartney last season. The punt returning was iffy during the Hope era, with a lot of muffed punts and very few big returns. If the Boilers can find someone to at least reliably fair catch the ball, it would be an improvement. 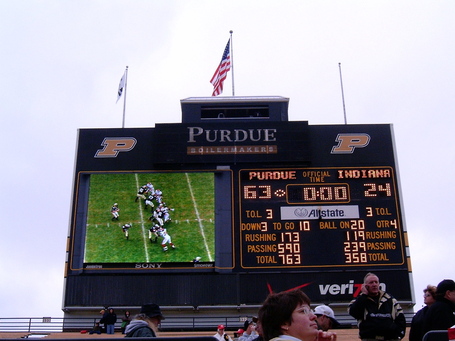 Purdue gets to play their toughest competition at home this season, with Nebraska, Notre Dame and Ohio State all coming to Ross-Ade. And the Boilers still get to play Illinois and Indiana.

The non-conference slate includes Northern Illinois and Notre Dame, who went to BCS games last year, and Cincinnati, who went 10-3 last year. As far as cross-division games go, Purdue dropped Minnesota and Michigan and picked up Nebraska and Michigan State.

Even if Purdue improves in 2013 under Hazell they could still end up with a losing record due to the tough schedule.

If You're Talking to a Boilermaker Fan