Are Ted Glover and Gordon Gee the same person?

Gordon Gee is in hot water for some of his recent remarks. Ted Glover has made similar remarks in the past. Is this just a coincidence or is there something else going on here?

Share All sharing options for: Are Ted Glover and Gordon Gee the same person?

Let's get right to it. Are Gordon Gee and Ted Glover the same person? 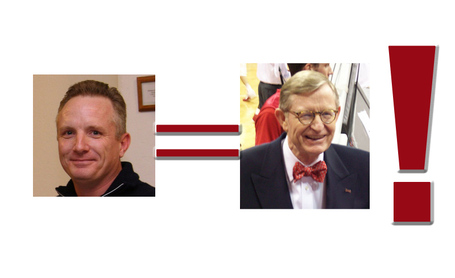 After a lengthy investigation, I have come to the conclusion that "Ted Glover" is a fictional character that Gordon Gee created and maintains. This post will show indisputable evidence that proves that Gee and "Ted" are not different people. After viewing the evidence, I realize that many readers will have many questions about my findings, and I will do my best to answer those questions at the end of the post.

On B1G expansion, Gee and "Ted" have very similar opinions. Some would say "eerily similar". Notice how both seemed to believe that the ACC was in trouble. Also, notice (or at least infer) that they both seem pretty happy about the B1G killing the ACC. Lest you think that I am making these quotes up, the names link to the quotes.

In his now infamous remarks, Gee had something to say about Bret "Bert" Bielema. As a shock to no one, "Ted" had similar thoughts.

As far as anti-Catholic vitriol goes, few (aside from KKK members) can compete with Gee's recent comments. "Ted" may be anti-catholic, but he is smart enough to not go on the record about it. Or is he?

Remember when Jim Tresselball was in hot water for that tattoo thing? Here's how Gee and "Ted" responded when asked if "The Vest" should be fired:

Let's look at some other ways that "Ted" and Gee are similar to prove my point about that they are the same person.

I think I have proven without a doubt that Gee and "Ted" are not two different people. I could find and show you guys even more evidence of this, but I think it would be a waste of time. You and I both know the truth at this point. So let's move on to the questions that I'm sure you will have.

Gordon Gee needed "Ted Glover" because he wanted to try out a different personality. Many of us use anonymous "online screen names" so that we can say what we want on the internet, without fear of government agents showing up at our doors and arresting us for the opinions we express online. If you see someone on the internet using a real name, that person is a government agent (or someone is using a fake name that looks like a real name (like Graham Filler)).

Gordon Gee created "Ted" to have a much calmer and less foot-in-mouth personality than Gee himself. He wanted to see what life would be like if he acted like a normal person and didn't go spouting off like a stereotypical one percenter. As you may have noticed, "Ted" often fails at this and sometimes the real Gee's opinions come out.

How is this possible? I have seen pictures of "Ted Glover" or have met him.

What are we supposed to do now? I like Ted's writing, whether he is real or not.

Don't do anything. I am not writing this so that "Ted" stops writing. He is one of the best writers on this site. Act like "Ted" is real. And please don't tell either "person" you know, as Gee might stop posting altogether. I don't think he will though; he is too arrogant and will just deny that he is "Ted Glover" if confronted with the evidence.

Why write this post if you want us to keep acting like Ted is a real person?

I just wanted to show everyone how smart I was for figuring this out.