So we've bought ourselves a Maryland. Time to find out what the OTE writing staff has to say about all of this.

Share All sharing options for: B1G 2013 // OTE's Maryland Potluck - WHO ARE YOU AND WHY ARE YOU HERE?

Mr. Bell really needs to hire new assistants to help keep that Job A nonsense in line. His pain means you're going to get your delayed recipes from me again. As before, this also means you can blame him for the questions and me for the recipes. But I wouldn't worry about the recipes. I mean, who better to talk crab related food items than a fan of the school that is the 2nd farthest away from Maryland? Normally the lack of crabs in Minnesota might worry you. But little did you know that we have crayfish which are basically crabs*** so I think we're good.

***I'm sure that is not at all true but I'm not a science guy and I don't feel like Googling it to find out just how wrong I am. They're are the closest thing MN has to crabs so just deal with it and move on. 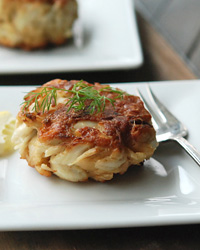 Appetizer - Baltimore-Style Crab Cakes: Wait, who is joining the B1G?

Jesse Collins: I would like to sit here and say that I hate that the B1G added Maryland, but the prospect of Crab Cakes at a tailgate coming near me has won me over. Seriously guys, I know there's some angst about adding a team that seemingly has nothing in common with most all of you, but Crab Cakes. This is a value add based solely on that. Oh, and I'm pretty sure that helps put some guaranteed wins up for the power schools, right?

MNWildcat: Maryland and Rutgers. Weren't you listening? MARYLAND AND RUTGERS. Oh, you were listening but are underwhelmed? Well, I don't know what to tell you, then. Maryland plays lacrosse and is occasionally decent at basketball. Rutgers can't do a damn thing right. They both bring in TV sets. You knew all this.

Ted Glover: Maryland. Terrapins, which if I go by pictures and logos, is some kind of turtle. If nothing else, their mascot fits in with the current national perception of how fast we are collectively. This is the place where I wax poetically about Maryland basketball, but I don't know anything about basketball, Maryland or otherwise. Seriously, there's a picture that makes the rounds on OTE that MSU folks post. It shows an MSU guy getting ready to shoot the ball against Maryland. I know nothing of the context, and I only surmise the outcome turned out in MSU's favor because they it's Sparty folks that post it, with Maryland posters replying RAWRFUCKRAWR, like some type of Bo Pelini Turrette's ourbreak. Oh, I also know Gary Williams used to coach at Maryland, and he was the OSU b-ball coach back in the day. Stefon Diggs is Maryland's best football player. The only reason I know this is because Ohio State recruited him hard last year, and after watching his video I thought he would've been a perfect fit for Urban Meyer's offense. But he wanted to stay close to home, so he chose Maryland. Also, Ralph Friedgen is a portly fellow, but he's no longer the football coach. Randy Edsall is, and he's kind of like an East Coast Tim Brewster, but he's been to a BCS game. Only not with Maryland.

Comin' over to play! 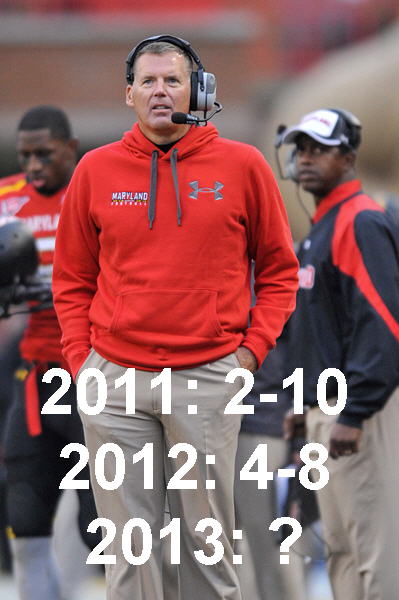 Here he comes With all his friends

Got time to spend with you 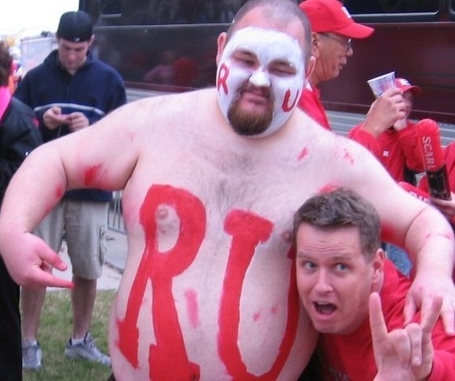 Comin' to your house! 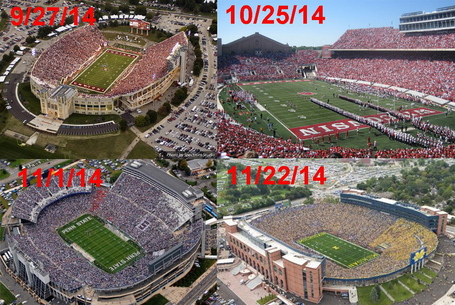 Comin' to my house! 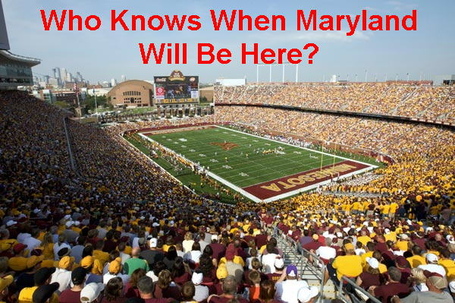 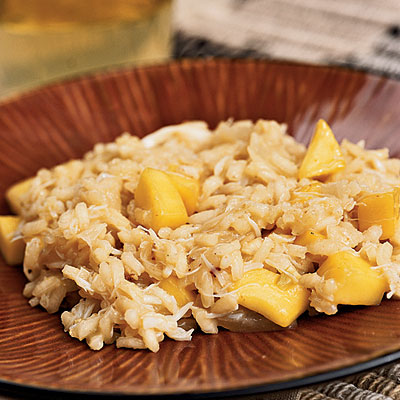 Jesse Collins: Okay, look, I'm still defending this move. I'm on question two and I see no reason to hate on Maryland. Also, this is where we reiterate that from here on out, our reduction of their fanbase to a summary demeaning description is Laxbros. Heck, I feel like that was one of their descriptions, so I don't feel too bad about it.

MNWildcat: THEY BOTH BRING IN TV SETS. WHY IS NO ONE LISTENING TO ME?!

Ted Glover: Look, B1G folks, get over it. Maryland and Rutgers are here to stay, so how about we start making them feel welcome? Maryland has done nothing wrong here. They were invited by us to join the fraternity, so how about we quit making them feel like they have the clap? They are a quality research institution, they bring a serious pedigree in lacrosse and basketball, and they're mostly a respectable football program. And you in the back QUIT LAUGHING BECAUSE DANNY O'BRIEN LEFT TO GO TO WISCONSIN AND NOW HE LEFT WISCONSIN THAT IS NOT THE POINT. A lot of Maryland fans were sick about leaving the ACC, and are unsure of what awaits them here. In football, it'll be mostly ass whippings, as they'll be in the same division as Ohio State, Michigan, and Penn State. But in basketball, they'll do very well, so I've been told.

Granted, the conference is losing some intimacy and part of our Midwest brand, but let's face it, our population centers are slowly dying. Recruits aren't coming to Big Ten schools just because they're a Big Ten school anymore. They need top coaches and facilities, and the conference's expansion to the east will bring in more money, which will attract top coaches, who will build top flight facilities. if this realignment boosts the coffers and allows the conference to get back to the top, I'm all for it.

GoAUpher: Eh, it could be worse. I have family in Hagerstown and friends in DC so I can think of worse additions (COUGH IOWA STATE COUGH). 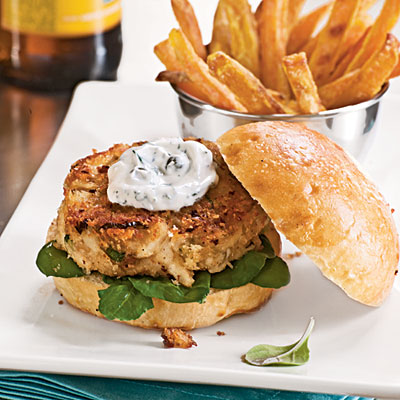 Dinner - Crab Cake Sliders with Dill-Caper Cream: Why? What was Delany thinking?

Jesse Collins: Delany thinks in one way and one way only... C.R.E.A.M. We all know that, right? More importantly, let me also point out that Wu Tang Clan is going to be performing in Des Moines over 4th of July weekend, and I find that pretty remarkable. Wait, what was the question? Oh right, Dollar Dollar Bills Y'all.

Ted Glover: I'm 99% sure that Maryland/Rutgers was a stepping stone to 16 or more teams, and they still might, but the ACC surprisingly saved themselves with a Grant of Rights earlier in the spring. I still believe the end state, in some shape or form, is Notre Dame in this conference, and Jim Delany will go to 16, 18, or 20 teams to do that. Why? Money, pure and simple. Both Maryland and Rutgers will expand the amount of money each team in the conference gets from the BTN, and further expansion into North Carolina and Florida would add insane cash to the coffers. But Notre Dame takes it to the 'filty luchre' level, and even though things are stable now, it'll be interesting to see where things are five years down the road or so. Once the B1G starts realizing new money from expanded BTN coverage in the east and re-negotiates their TV deal, the money per school will be significantly more than any other conference, even the SEC with their network.

Even though I think the timeline has been stretched from months into years now, I don't believe we've seen the last of conference realignment. There's just too much money out there, and when schools in conferences like the Big XII and ACC realize there's a ton of cash to be made by moving into the B1G, we'll be doing this again.
GoAUpher: 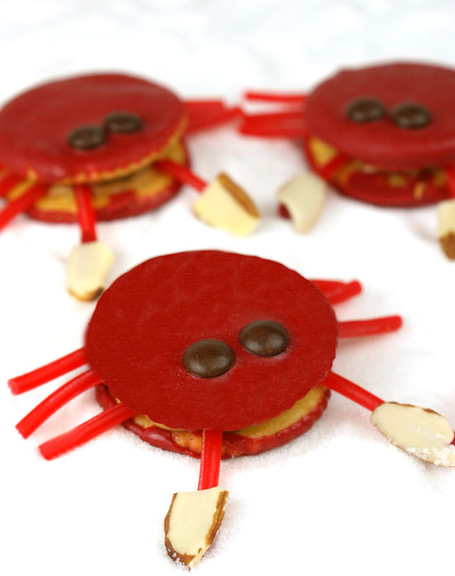 Jesse Collins: Could be worse, the Pac 12 added Colorado and Utah.

MNWildcat: No one else. Retroactively kick out MD and RU. And MSU, for that matter, just because of the Schadenfreude I want to enjoy. If I had to choose a fourth team? Illinois. Nice things, etc.

Ted Glover: Rutgers. I got nothin'...except a bunch of athletic director jokes. Hey, how many Rutgers AD's does it take to screw in a lightbulb? I don't know, because the light bulb sued them for sexual harassment. Hey, what do Titus Young, Pacman Jones, and almost every Rutgers AD have in common? EVERYTHING!! GET IT?!?! DO YOU GET IT???

GoAUpher: I hope everyone is ready for Jersey, because it's coming to take over your town. I can't wait to watch games in Minneapolis, New Jersey! Confused? Don't worry... 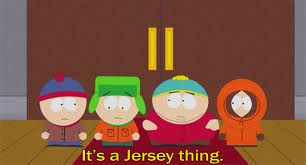