B1G 2013 Maryland// How Can We Hate Something We Know Nothing About?

Well, if you're a Big Ten fan that isn't happy with realignment, it's easy

Share All sharing options for: B1G 2013 Maryland// How Can We Hate Something We Know Nothing About?

Editor's Note: The OTE staff was flummoxed as to how to handle the Friday hate piece for Maryland. We don't know enough about them to hate them, and they really have no rivals to speak of, so getting some guest help from a rival blog wasn't really an option, either. We had a pretty lengthy email discussion going on when out of the blue, community member slidingscrapes sent me an email with some well written Maryland hate, and it's too good not to use.

So sit back, grab a drink, and enjoy while slidingscrapes discusses his newfound hatred for Maryland. We think you'll like it...Ted

You're not welcome here.

I don't want you. Most of us don't want you. Honestly, Jim Delany doesn't even want you, but letting you play our teams was unfortunately a necessary evil in order to get the TV money you'll bring. But my alma mater prints enough dough without your dirty money to sponsor 36 varsity sports (and we still turn a profit, which you guys could learn a thing or two about), so I can honestly say I would rather you not be here and forfeit the money you'll bring. We'll survive.

I despise you for having no discernible football tradition, or a team that is good right now, or even a team that has been good recently--and for still thinking you're hot shit, all that, and God's gift to the B1G, and we should kiss the ground you walk on. That we should be THANKFUL (!) you're here. Hallelujah, just what we wanted--it's a self-righteous East Coast clone of freaking Indiana who has the nerve to think they're gonna walk in here and start churning out wins.

That Friedgen guy was the only coach in the last fifty years who one might call "moderately successful" and you fire him... pass on hiring Mike Leach... and hire RANDY EDSALL? But wait, people won't notice how much you screwed the pooch on the coaching search (and pretty much your entire football history) if you just plaster the Maryland state flag on everything. Maryland: Not good at football, great at diversions. 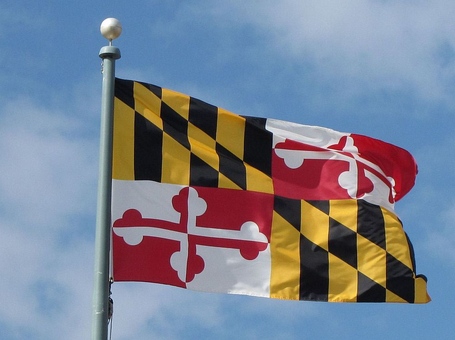 Pay no attention to the shitty football behind this curtain flag

Do you know how much I hate the fact that I have to accept you now? I hate that we'll be forced to skip playing Iowa or Wisconsin or Nebraska on a yearly basis to play you. I hate that road trips will now mean visiting a large high school stadium with an Erector set second deck built on one side, or worse--that the game could be outsourced to local NFL venues because your pathetic on-campus stadium isn't built to accommodate an actual crowd of people who like football. I hate that not only are you terrible at football, you don't care, as long as lacrosse is good.

I hate that you're so irrelevant that you don't have a rival. Please, don't mention Johns Hopkins, you laxbros, that doesn't count. "But Penn State doesn't have a rival, either!" you say. "But MSU!" Whether or not PSU wants to admit it or not, they and Pitt are an item, and MSU has two halves of a rivalry, one each with Notre Dame and Michigan. But Maryland? It's the classic sad story of unrequited love, except it's unrequited hate, which is even sadder. Virginia and Duke and UNC all see you as the pesky kid hanging around uninvited at the playground, which they only marginally enjoyed having around just to have someone to pick on, and they're all happier now that you've finally left. 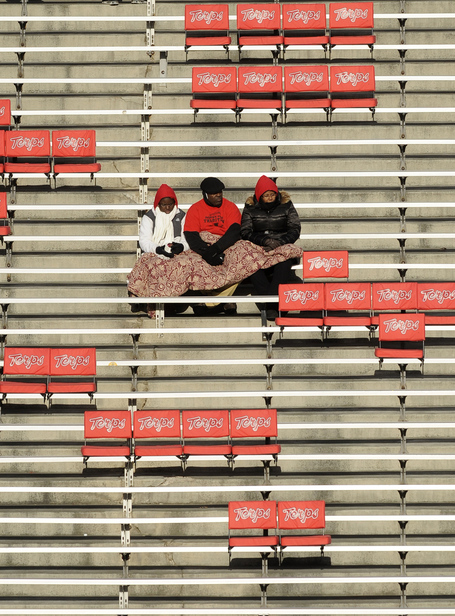 Maryland football fever...where Northwestern can give you shit about attendance

And that's another thing--I hate that you don't seem to understand how much the ACC doesn't give a shit that you're leaving. Boston College and Wake Forest might be upset that they lose a team at their level and have to play Louisville in your place, but that's it. If Coach K didn't find your "Fear the Turtle" slogan so damn annoying, he probably would have forgotten you were still there years ago.

I understand that there's nothing I can do to change you joining the conference. I understand that the mature thing to do would be to accept it and move on, treating you with respect equal to what I give the other ten teams (yes, ten--don't mention Buttgers to me, either, and fuck Michigan). But you know what? Kiss my B1G ass for thinking you deserve respect. I hate you for being here, Maryland, and that will not change. All I ask is that you lay down quietly while we drop seventy on you on your home field and wipe our asses with "Maryland pride." (Check them out when we're done, they might look better.)