Camp Randall Gets The Sherman Treatment.

Share All sharing options for: B1G 2013 // Your Off Tackle Empire Wisconsin Shirts

The classic cardinal and white comes to Off Tackle Empire. 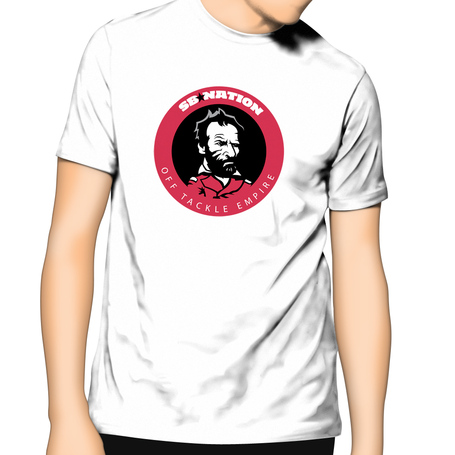 Strong, strong play from GameDay Depot. Sherman and his cardinal uniform are fitting designs for the Badgers, as their legendary home field advantage plays out on the site of a Civil War camp.

Camp Randall is a historic U.S. Army site in Madison, Wisconsin, named after Wisconsin Governor Alexander Randall. It was a training facility of the Union Army during the Civil War, with more than 70,000 recruits receiving training there. Later, a hospital and a stockade for Confederate prisoners of war were located at the camp. The site was purchased by the state of Wisconsin in 1893 and deeded to the University of Wisconsin. Of the original 53½ acres, a segment was set aside as a park, which now features a memorial arch, two Civil War cannons, and a stockade building.

Pick up a shirt and get yourself hyped to jump around with William T. Sherman.

Here is the direct link: