There's a reason I picked this article to write. No coaching change, suckers! Guess who phoned it in this week?

Share All sharing options for: B1G 2013 // Northwestern's Smartest Guys in the Room

Zero new coaches will prowl the sidelines for the Wildcats this fall as the program suits up perhaps its most-hyped team since 2001. Regardless, let's take a nice lil' look at the Smartest Guys in the Room up in Evanston. 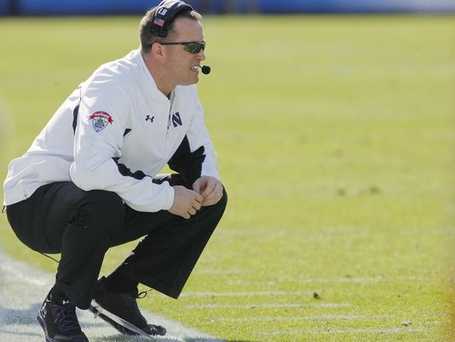 Who is this guy?

He's awesome. You might know him as bewitching baked potatoes to hurt Iowa Hawkeyes. We think he's pretty swell, in spite of his White Sox-fandom. We all have character flaws, you guys. Regardless, he's the man at Northwestern. Being a NUMB alum, I got to hear Fitz speak yearly to the band, in addition to at a couple res colleges and school events, and the guy has an infectious personality. He loves Northwestern and embodies the success to which Wildcat student-athletes aspire. He's now 50-39, the all-time winningest coach at Northwestern (shut UP, you guys), tied for all-time winningest coach in bowl games at Northwestern (I said shut UP) and is signed through 2020. Barring something ridiculous, Fitz is the man 'til he decides he's not anymore.

To his credit, Fitz has done exactly what a coach who entered a Big Ten job as the youngest coach in the NCAA (at the time) should do: surrounded himself with capable coordinators and assistant coaches, avoided coaching turnover, and focused heavily on recruiting and selling the Northwestern experience. His in-game management has been criticized by many for being, among things, too predictable, too free-wheeling, too conservative, too aggressive, and so on, but he's doing the off-field things necessary to put Northwestern in a position to win, being a positive face for the university, and really being a picture of what student-athletes from Northwestern can accomplish for their school.

You bet! You've seen excited Fitz...confused Fitz...but don't forget that Fitz can get up.

When not touting the highlights of the NU football program, you can see Fitz constantly tweeting about the Blackhawks during the Stanley Cup, other Chicago sports goings-on, congratulating every single Northwestern athletic team on every single accomplishment, and retweeting motivational stuff that ostensibly the person managing his account finds interesting.

I considered copying and pasting Jesse's preview from last year, but figured I should bring something semi-pertinent to the party. Look, bro's not going anywhere. He's a career OC who left Bowling Green in 2008 to join Northwestern's staff, and he's been the crafter of some pretty cool offenses ever since. His offensive rankings, by year:

The improvements jump off the page in the final column: despite regressing last year in YPG, McCall's offenses scored at an alarmingly higher clip in 2012 than any other season. Both first downs and time of possession were down from 2011, but in 2012 Northwestern turned the ball over only 15 times on offense, down from 17 in 2011 and 23 in 2010.

Much of McCall's sustained offensive success, though, appears to stem from an adaptability in his playbook: moving from a loose cannon like CJ Bacher in 2008 to a pocket passer like Mike Kafka in 2009 to a scrambler in Dan Persa ('10-'11) to the two-QB system of Kain Colter and Trevor Siemian last year, McCall has added new wrinkles every year to play to his lineups' respective strengths.

Additionally, consistency on the offensive line helped McCall develop a fearsome rushing attack in 2012. If the offensive line falters in 2013, look for sack rates to be on the rise and average YPC for Northwestern rushers to be down.

Never, brah. McCall's a lifetime assistant and Fitz has been very happy with him at Northwestern.

Nope, and @FakeMickMcCall has been inactive since the Boston College game in 2011. Bummer.

Hankwitz has been the architect of many an underwhelming Northwestern defense since joining Fitz's squad in 2008 after two years as BERT's second DC in Madison. One of the popular fanbase (I include me here) whipping boys during the 2010 and 2011 seasons, along with defensive backs coach Jerry Brown (a Northwestern lifer spanning 4 decades), Hankwitz's unit rebounded in 2012. Since I guess I've set off a trend with tables with rankings, lookit:

Hey everyone, what a shock! Turns out controlling teams on the ground and forcing inefficient (relatively speaking) performances out of passers correlates to better records! All in all, Hankwitz's turnaround in 2012 stemmed from forcing 29 turnovers, up from 20 in 2011 and 22 in 2010.

As I mentioned, another whipping boy (along with Hankwitz) for Northwestern fans has been Jerry Brown, the DB coach. Working with an under-athletic and, in the case of last year, injury-marred defensive backfield, Brown's units' inability to keep teams from rolling up large amounts of yardage on the ground (Northwestern's 3 losses in 2012 come to miiiiind) drew the ire of 'Cats fans all the way through the end of 2012, though a strong Gator Bowl performance put several of those complaints to rest. What Hankwitz and Brown do with marginally improving recruits on defense will largely determine how far the Wildcats go in 2013.

See McCall, Mick. Hankwitz was an interim HC at both Arizona in '03 (7 games) and Colorado in '05 (1 game), but he looks like a comfortable, lifetime assistant. Fitz is noted for his loyalty to assistants, and Hankwitz appears to be no different.

Apparently! His tweets are protected, though, and I don't use the Twitters, so peruse them if you can @MikeHankwitz.

Of course you do! Check out NU Wildcats Football for all sorts of updates on accomplishments by Northwestern football players.