The Northwestern Wildcats: An Amalgamation Of Many Awful Things

You like Northwestern? What the hell is wrong with you? You are weird. Go away.

Share All sharing options for: The Northwestern Wildcats: An Amalgamation Of Many Awful Things

But I do hate. Sweet Odin above do I hate. And I do love to hate Northwestern.

Did you know the Wildcats have only managed to win double digit games in a season three times? THREE TIMES! You might ask yourself how is that even possible? I will tell you how. By being awful. Forever. That's like the majesty of somehow not even making it to the World Series since 1945. I'd make further comparisons to the Cubs based on both teams' respective postseason shortcomings, but the Cubs are actually popular and until recent seasons managed to have people attend their games. Short of giving out free diplomas, Northwestern isn't going to sellout to a home crowd any time soon. 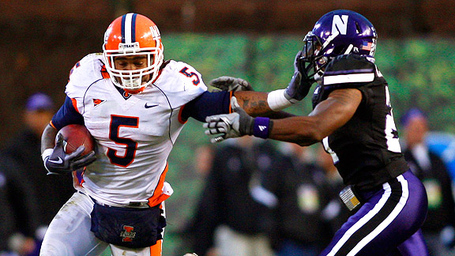 This recent ... well we can't really call it a resurgence now, can we? A resurgence implies that they've been there before and that's just a lie. This recent ascent (that feels better) is certainly impressive. I'm not going to go down Robert from A Lion Eye's road and quote the weak OOC scheduling that has helped make it possible. That would be unseemly. Only a ruffian would say something to the effect of Northwestern's scheduling is softer than their alumni base's hands and midsections.

If you're not a fan of fantastic 80's movies (and why aren't you?), you might not recognize the man in the picture at the top of this article. That man is one William Zabka. William Zabka played the uppity W.A.S.P. antagonist in Back to School, the Karate Kid, and Just One of the Guys. Besides perfectly embodying the student body of Northwestern, but because his story arc accurately matches up with Northwestern's defense. Just like the Wildcats were only 5:03 (or whatever silly number) away from a perfect season last year, every character Zabka ever played did great until the final act of the movie when they ultimately shit down their leg, somehow losing to the Ralph Macchio's of the world. Yes, I just compared the 2011 Illini team to Ralph Macchio. I am okay with this. 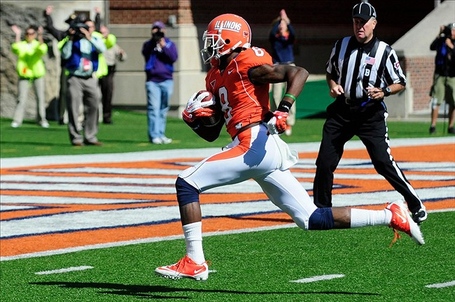 And Ralph finds the end zone yet again!

If you went to a Big Ten school, as so many of you claim to have, surely you met many people from Chicago. And upon asking "What part?" because you are so suave and talented at small talk, the Chicagoan in question would then crumble and say something like Libertyville or Wilmette. I'm sorry, but I couldn't make it through an entire post insulting Northwestern without bringing up that Evanston does not equal Chicago. Some of your campus is located in the city and the purple line goes out to Evanston? NEAT! You're Skokie. You're Oak Park. You're not Chicago. It takes a mere fifteen minutes longer to drive from Ann Arbor to Detroit than it does to drive from Evanston to downtown Chicago. I thought private school kids were supposed to be smart.

Northwestern already stole their team colors, name, and mascot from Kansas State, managing to be less impressive with each theft. And now they're continuing that trend by attempting to take K-State's legacy of "god awful team that somehow becomes regularly above-average"? There are horribly weak links in this strategy though. The good Wildcats have three times the amount of double-digit win seasons. They've been to BCS bowls and need more than two fingers to count bowl victories. And for all his supposed sorcery and wizard skills, Pat Fitzgerald is not even a quarter of the magician that one Bill Snyder is.

I'm going to skip over mocking the basketball team because seriously. It's not even worth mocking anymore. Chris Collins is not the panacea to cure that steaming pile of crap. There is no cure. Burn it to the ground.

It's difficult to write a true hate post for Northwestern, because what's the point? The school is responsible for Rod Blagojevich, Jerry Springer, Graham Spanier, Darren Rovell, and Mike Wilbon. Apologies are necessary. You can't even effectively compare them to other terrible things because other terrible things occasionally stop sucking long enough for a prolonged bright spot. Sure, they're getting better. But look at that history. It's full of tears and dysentery. And a sub-.500 record against Illinois.