You want #SCOOPS? Then you've come to the right place. This is the behind the scenes story of how the CHROME-TASTIC Indiana football helmets became a reality.

Share All sharing options for: OTE SCOOPS - Anonymous Tipster Emails Us The Prelimary Plans For One Of Indiana's Helmets

I was just minding my own business, creating tin foil hats for my friends and family who aren't on OTE to wear in solidarity with us for MSU week when I get a mysterious email. Enclosed, several detailed concept drawings for one of Indiana's new helmets and a treasure trove of intermal memos and email communications detailing the design process. I couldn't believe what I was seeing. The emailer said he was an Indiana fan who actually cheers for IU in football (I know, we've found a unicorn) and that he wanted the world to see the decision making process that was at work in Bloomington.

What's that you say? You aren't familiar with the new IU helmets because Indiana football is less real to you than something called a Purdue? Well faithful reader, let me show you what I'm talking about. (WARNING: IMAGES MAY NOT BE SUITABLE FOR THOSE WITH TASTE OR A SENSE OF TRADITION) 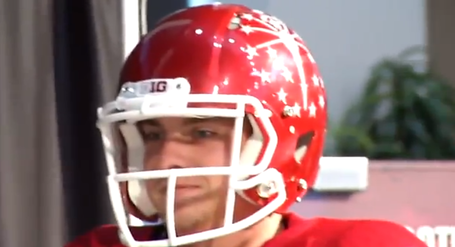 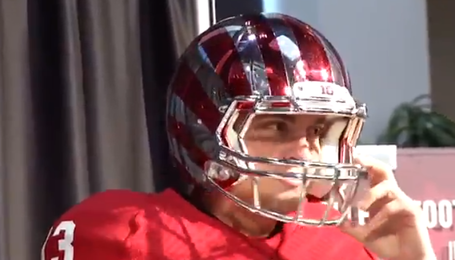 My mysterious source said the first one was odd but ok because it repped the state flag and that the other more traditional options were also acceptable. But the second helmet pictured? The one that looks like it came from Top Gun? 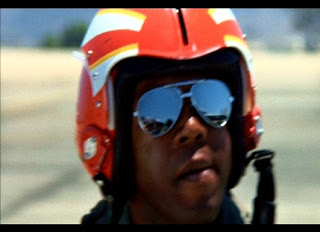 Well, my source wasn't too happy about that one. He said it made him want to cheer for Notre Dame like all of his friends. I couldn't allow that to happen since cheering for Notre Dame is worse that cheering for Iowa. So I promised to bring the truth to everyone at OTE so that you could spread the word about the decision making debacle that led to the Chrome Candystriper helmets.

According to my source, there were 4 preliminary options shown to the coaching staff and AD before they decided to go with the current design. According to the internal memos I've been shown, the impetus for the SUPERDAZZLESTRIPEYHATS design was to impress recruits. Since IU was looking to inspire young men to come to Indiana, the committee (made up of the coaching staff, AD Fred Glass, head basketball coach Tom Crean) discussed who the best muse would be. In a bold twist, the coaching staff asked that the person submitting the design be younger than the normal recruit. The staff felt it was best to inspire the next generation of IU footballers early so that the recruitment process was already complete by the time the player reached high (or even middle) school. As a result, one of the assistant coach's young sons was asked to participate in the design process. Here is his submission:

Based on the email chain which followed, the football staff and AD Fred Glass were impressed with the concept. The really excited person was Tom Crean. If the snickering side e-mails between the football staff are to be believed, he was simply gobsmacked by the idea. 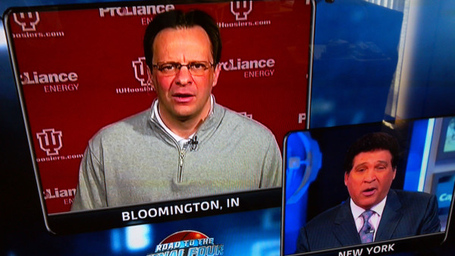 (Artist's interpretation of how Tom Crean must have looked, as inspired by his everyday reaction to everything)

He spoke passionately in favor of the design. Crean's response e-mail had a lot of comments about how much this made him need to adjust his pants, but it also included some lucid thoughts about how "IU was known more for it's basketball tradition than football and nothing spoke to young recruits more than a pants which had been around since disco."

Clearly their young artist was on the right track. Adidas was contacted and their uniform design team was commissioned to render a higher quality option for approval. The firm soon returned with option #2. 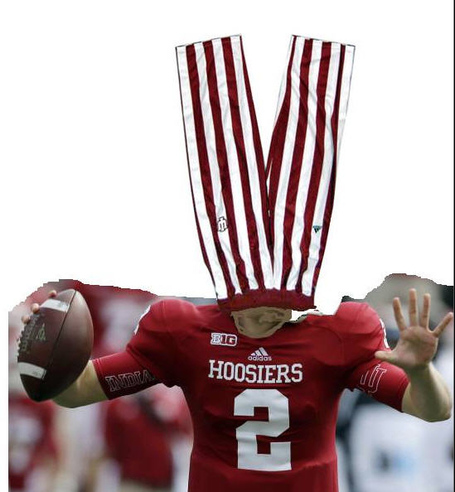 Option 2 was a hit with everyone as far as thematic vision, but according to internal emails head coach Kevin Wilson was concerned that this design would impact his team's passing game in a negative way due to the lack of eyeholes in the pantshelmet. The design team was sent back to the drawing board. The result was option #3. 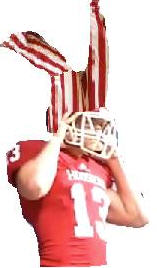 Once again the response emails included raves about the basketball pants theme, but AD Fred Glass commented that the design was a bit sloppy looking. "We're looking for something that shows how proud we are of our basketball tradition. While I appreciate the modern take on the pants, this design looks like a pair of discarded warmups that have been thrown in the hamper for one of those pipsqueak managers to wash." The design team vowed to get it right with their next effort. The result was option #4.

The email chain that followed reveals that all of the decision makers were convinced this was the choice. "BOLD STATEMENT!" said co-offensive coordinator Kevin Johns. "This will definitely help my defense hold Wisconsin to a mere 375 yard rushing" said co-defensive coordinator William Inge. In fact, it appears as though the school was in the process of ordering a full shipment of these helmets before one of the equipment managers was accidentally shown the plans. The manager astutely pointed out that a helmet made out of a pair of basketball warmup pants would leave the players exposed to all sorts of traumatic head injuries and that simply attaching a facemask to the pants was not enough. While saddened, the coaching staff realized their error and were forced to share the news with AD Fred Glass.

What follows is several weeks of morose laments about player safety getting in the way of fierce design choices and diatribes against the NCAA for imposing such burdensome uniform requirements. "Don't they know they're dooming programs like Indiana with a massive recruiting disadvantage?" said Kevin Wilson. "We're not the basketball team, we don't have fans who will resort to mob violence if we were to embrace Zubaz uniforms or add the new B1G logo to our field. This is our chance to make a statement in recruiting."

Just when all hope was lost, co-defensive coordinator Doug Mallory sent out an email suggesting that they copy the best ideas of a recruiting powerhouse while adding an IU twist. He pointed out how much recruits loved the chrome Oregon helmets. Why couldn't they just do chrome striping? Adidas, never one to shy away from taking a bad idea one step further than Nike, was enthusiastic about the concept and their design team quickly came back with the helmet design the world was introduced to yesterday.

Emails show that there was some concern from the Hoosier medical staff that the helmets could cause a sensory overload for anyone who saw the helmet under the wrong lighting conditions. However, they also noted that the anticipated side effects of nausea, disgust, uncontrollable laughter, and a strong desire to ridicule those wearing the helmet were likely affect only fans of other teams. "Why should we care about their well-being?" said Fred Glass in a March 23rd email. "They don't buy season tickets."

The medical staff also raised concerns that the helmet could cause their own players to faint from embarrassment, but that the risk of such an event was small as the players should be well inoculated to embarrassment since they already played football for Indiana. Sadly, as yesterday's video shows previous exposure to humiliation was not enough to protect every IU football player.

Ultimately, the new helmets were approved on April 1st (apparently the significance of this date was lost on the folks at Indiana) and a reveal was planned for early June.

My tipster pleaded with me to urge everyone to hold off on making fun of Indiana. "Focus on the spirit of MSU week!" he begged. "Focus all your humor on the tin foil and the apples and the CONSPARTACY!" I told him I'd do what I could, but that sheer stupidity of the CHROME AWESOME RAWWWR! helmets would probably be hard for most people to ignore.