Share All sharing options for: B1G 2013 // Keeping the Enemy Close: Mustering up some hate for lil' bro

If you would have asked me three or four years ago to write this piece it would have flowed out of me like so many natty lights out of an MSU bro the morning after a Three Dollar Thursday at Ricks, East Lansing (do they still have those? Ah, when I was young...).

I grew up in the heart of MSU country, attending middle and high school in a small town a half-hour outside of East Lansing, and it was almost guaranteed that my teachers would all be MSU grads intent on busting my chops for wearing Michigan gear. Past that, the majority of my classmates and their parents were also Spartan fans (farm towns, yo) -- granted, few if any of them had any tangible connection to Michigan State, but some of us don't get hung up on that. I was surrounded by the hate from Michigan State fans, and I gave as good as I got.

Going away to Michigan for college I saw the rivalry in its natural state for Michigan fans -- a secondary rivalry to The Game. The Spartans were still a rival and that game meant a little more, but one where the hate was built on proximity -- not on a long history of even competition and give-and-take.

Even dealing with the Rodriguez years as I was confronting my own team's utter fallibility and Michigan State fans were lapping up all the schadenfreude they could after years of being utterly marginalized when it came to college football in the state of Michigan (remember, before Michigan State's four-game win streak Michigan had won 31 of the past 40 games and not lost more than one game in consecutive seasons), it was still one sided in focus. Spartan fans from 2008-2011 were like once-sober meth addicts falling off the wagon in droves, incapable of showing any restraint or judgment, and high not just on the drug (wins), but on the rush of finally getting their hands on something that was out of reach for so long. Being on the receiving end of that much grief (I was living in EL at the time) tends to get your blood boiling a bit more than normal, but I wasn't as worried about losing to MSU as I was the losing in general.

But maybe these days I am too old to hate. Or just too much of a hippie who's too into peace and love -- I did spend four and a half years at that school that has a student body which, according to most MSU people I talk to is made up of half Asians, half ugly girls, and half hippies (don't get too down on them, math isn't their strong suit.).

I mean, I try. My MSU friends recently brought up the Clock-gate game in an email chain, and boy did I get worked up about that for a minute. Watch the video.

But after getting angry and firing off a couple emails, I found myself somewhat calm again. How am I supposed to get all worked up about that game when I sit back and think about Michigan State's recent resurgence that is looking like it will last just about as long as that final tick of clock in 2001: a tiny bit longer than it should have, and just long enough to be memorable.

I mean, this is a team whose fan base complains about Michigan fans feeling entitled to success, citing the fact that since the 40s Michigan has only won a share of one national title. That's rich coming from the team that hasn't made it back to the Rose Bowl since 1988 and hasn't even won a Big Ten title that wasn't split in that same period. In fact, Michigan State only really made a significant leap once Michigan self-immolated under Rich Rodriguez (ask Tom Izzo how nice it is when your biggest in-state rival completely falls apart) and the rest of the Big Ten (outside Tattoo-U) largely floundered. But of course Spartan fans still make it a point to claim that Michigan -- coming off an 11-2 Sugar bowl winning season and an 8-5 season -- is the pretender while last year's 7-6 record was just a blip on the radar for Mark Dantonio and company.

Maybe that's my problem, I should be trying to focus my hate on coach D. That should be easy enough. He is, after all, the guy that has said both "pride comes before the fall" and "where's the threat?" because apparently the only thing shorter than his temper is his memory for the smarmy comments he makes to the media with that same shit-eating grin on his face. But it isn't really any surprise given that he is the same man that made short jokes at the expense of a Michigan player after that Michigan player made a couple innocuous jokes of his own. Because, you know, a head coach approaching something like that with tact and class is for nerds. In fact, let's make that our team's rallying cry.

By all means, Mark, don't comment on it. Or do and then play it off like you didn't. All class, that guy.

But that was all fun and games. It wasn't serious business like that time he cut off Michigan WR coach Jeff Hecklinski at a coaching clinic because his feelings were hurt that Hecklinski was talking about Michigan too much. Or the time he called Jim Tressel a "tragic hero" despite Tressel's fall from grace being neither tragic nor that of a hero. Unless in Mark's mind heroes intentionally cover up the truth because they know admitting it would bring negative light and the potential for punishment to their program. But let's just overlook it because the man exudes "strong Christian values" that send hack sportswriters into raptures.

Even given how much I really dislike Mark Dantonio and everything that he stands for (then backs away from, like enforcing rules and discipline for players who were just released from jail for assaulting another student athlete), the hate just isn't as fervent these days.

Maybe its the comfortable situation I find myself in vis a vis my team. Sure, Michigan still has yet to win a Big Ten title under Hoke, or go to a Rose Bowl, but things certainly seem to be looking up for the maize and blue. Not only is Michigan landing some great recruits, it has turned its moribund defense around using a lot of the same players that Rich Rodriguez and GERG Robinson failed with, and it is doing a better job keeping its recruits on campus and on a positive developmental track both as students and athletes. Also, Michigan is doing all of it at the expense of Michigan State. Remember that wide receiver that was a lifelong fan and briefly committed to your school, guys? That's right, he decided to go to Michigan instead. What would possess a talented high school football player from the state of Michigan to make that decision?

"Since I'm just playing football now. I want to play at a bigger school, win a national championship."

Of course, you all took that very well. 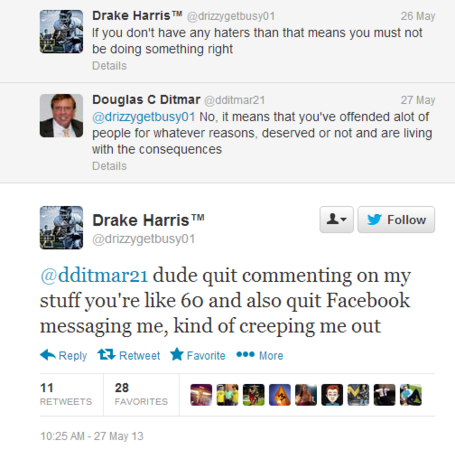 Classy. Let's pile on a high school kid for making a college decision we don't agree with on the basis of fucking sports, you lunatics. Oh yeah, not done. 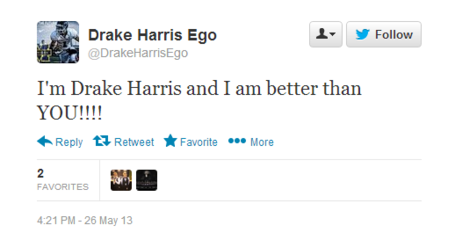 Parody twitter accounts: not just for the funny anymore. (Both courtesy of MGoBlog).

There was also Lawrence Marshall. What did he think of MSU?

I'm not sure, but he certainly had enough time to formulate an opinion.

In the end, I think that's it. I may have finally pinned down exactly why I can't quite muster the hate for MSU that I once could. It just isn't fun anymore. Do you know why? Because there is one thing that both Michigan and Michigan State fans can agree on: Michigan is the most important thing in the universe.

It is why at any given time you'll find between 5 and 10 active threads on the Red Cedar Message Board devoted to something about the University of Michigan. It is why if you asked most causal MSU football fans what the program's biggest win in the last decade was, at least one-third of them would say "that time Appalachian State upset Michigan" (they even have the App State t-shirt they bought to prove it). It is why MSU fans go out of their way to harass a high school kid for changing his mind on where he wants to go to college, and then those same deranged fans cite honor and respect as the justifications for their actions. It's why a kid that grew up an MSU fan would change his choice of schools when football became his future. It is why the first twenty seconds of this video fuel every bit of hate emanating from East Lansing.

And why everyone in green and white conveniently forgets about the rest of it.

"That's what they think so that's what I think. What can I say?"

Mike Hart didn't call Michigan State little brother. He articulated decades of MSU fan frustration better than anyone else had done before, and when confronted with the hard truth: that Michigan State was in many (quantifiable) ways the lesser of the state of Michigan's two major college football programs -- something fans had known it all along but been afraid to admit it -- all Spartan fans could do was put their fingers in their ears and cry that someone said something mean about them after their football team squandered a 10-point lead with just under eight minutes remaining. It was another variation on the same heartbreaking, gut-wrenching loss Michigan State had suffered at the hands of Michigan three our of every four games over the preceding four decades. And it was all too much for a fan base to accept when Hart cracked a couple jokes after just another win in a series full of them.

And now that Michigan has broken the win streak, taken back control of the high school talent in Michigan, and begun to build a foundation for future success while Michigan State has taken a step back because of an offense that practically moves backward and a slew of misguided assistant coaching moves (hi Jim), all the same bitterness comes roaring out of East Lansing again. MSU fans do what they always do: grasp in vain for arguments that prove MSU is equal or better than Michigan, and no one listens. The Wolverines are the ultimate measuring stick, and the fixation of Michigan State fans since Bo Schembechler started making it a point to beat the Spartans on an almost yearly basis. Michigan State football will always be judged in the eyes of its fans not by what it is, but what it is compared to Michigan. A football program forever defined by how much it can manage to show up the guy down the block.

Michigan and Michigan State are football rivals, just like they always have been. The difference is, for Michigan fans that rivalry is another game -- an important one, but just a game. For Michigan State fans it is a yoke around their neck, a life sentence, and an obsession.

Why should I waste my time hating on you when you already hate yourselves more than I ever could?

And hey, at least you always have basketb--

(Zach writes about Michigan sports at Maize n Brew, tweets @zach_travis, and buys into his own hubris everywhere. His sister will be attending law school at MSU this fall, but he has yet to decide if he will disown her. And all of his MSU friends are probably going to hate him for this. Sorry, not sorry.)