There's no return to sender on this one - Rutgers is joining the B1G in 2014. The Scarlet Knights get a tuneup in Conference USA the American Athletic Conference before the real fun starts. I'm happy to introduce you to your newest midwest neighbor along the Atlantic Ocean.

Let's start with the biggest news from last year: Rutgers avoided college football armageddon and was invited to one of the power five conferences. When you look at all of the schools switching during the realignment craze, few did better than RU. Jumping from the dumpster fire known as the Big East to arguably the most lucrative conference in college football is a dream come true for many New Jersey faithful. The old Big East netted Rutgers $3.125 million per year. Projections show B1G distributions to increase to around $30-35 million per school, so it's easy why there are virtually no critics to this move (at least on the side of Rutgers).

Now for actual football: Rutgers had a decent year on the field, going 9-4 for the season, reaching as high as #15 in the USA Today poll. Jawan Jamison rushed for over 1,000 yards and Khaseem Greene won Big East defensive player of the year, winning the title in back-to-back seasons (first time in the conference since the '98 and '99 seasons). RU also captured a share of the Big East title, and season attendance was at 93.8% capacity for 2012, averaging 49,188 fans per game. That was with Connecticut, Army, and Howard on the schedule, so you don't have to worry about empty seats on TV.

Less than a decade ago, a 9-4 season in Piscataway would have been a season for the ages. Times have changed, and with all of the hype surrounding the talent for 2012 Rutgers, it's hard not to see the previous season as a huge disappointment. Yes, it was the first year under Coach Kyle Flood. However, Flood served under Greg Schiano since 2005, and he made sure to continue the culture of the Chop: blue-collar football with a foundation on strong defense and running the football. With an all-conference defense and superb talent on offense, it was hard to accept anything less than a conference championship and BCS bid.

After starting the season 7-0, Gary Nova spiraled out of control under center and had a six interception game on homecoming against Kent State. He was never the same since, and the sudden drop in rushing didn't help. With a chance to clinch the outright conference championship, Rutgers lost the last two games of the regular season against Pittsburgh and Louisville, leading the latter 14-3 at halftime.

For 2013, the offensive unit should see big improvement from last season, with experience and talent returning to key skill positions. By most accounts, QB Gary Nova appears to have drastically improved from his inconsistent 2012 campaign (if you believe anything that comes out of spring ball that is). Former five-star recruit Savon Huggins is ready to take the reigns as starting RB after Jawan Jamison was selected in the NFL Draft. 6'6" freak Brandon Coleman will showcase his deep-threat ability for NFL scouts to prepare for next April.

The offensive line appears to be stacked for this upcoming season, as well as for years to come. 6'8" Keith Lumpkin is set to start at LT, and former AP freshman All-American Kaleb Johnson will slide over to LG. College football guru Phil Steele has senior C Betim Bujari on his preseason all-conference first team. Chris Muller, a member of the top-25 2012 recruiting class has made a strong enough impression this past spring to earn a starting spot at RG, moving last season's starter Taj Alexander to RT. I've always believed that strength in the trenches correlates to success during the season, so hopes are high that the offense can drastically improve on last year's dismal numbers (88th pass, 106th rush, 98th points for).

Of course, I can't end a discussion of the offense without mentioning the bold and daring addition of Ron Prince as offensive coordinator. I'm sure many of you are familiar with his internet-meme related articles. Infamy aside, Prince should be serviceable as coordinator for one or two years before he embarks on the next step in his journey to coach for every team in division I college football. 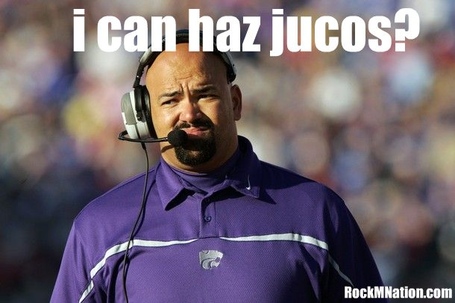 Without a doubt, Rutgers is a defensive-minded team. It stems from Greg Schiano, who instilled a blue-collar work ethic that still resonates with the current players and coaches. With 7 starters from the defense joining the exodus of players leaving to play on Sundays, this year's squad will look new, but shouldn't lack for talent, or even experience. Dave Cohen was promoted from LB coach to defensive coordinator after Robb Smith left to join Schiano down in Tampa. For a unit that finished 4th in scoring, 6th in rush D, and 10th overall, it's hard to go anywhere but down. I don't expect that large of a drop off, however. Jim Panagos is a known commodity as defensive line coach, and the D-line has a chance to be a strength. Sophmore DT Darius Hamilton, a former consensus five-star recruit, gained valuable experience last year and is poised for a breakout season. Athlon lists DE Jamil Merrell as a preseason all-conference first-teamer.

The linebacker corps appears to have lost the most talent, with Greene among those drafted. However, Kevin Snyder did play in several games last year and had no problem filling in for Greene at weakside LB on several plays. He should fit in nicely, and Jamal Merrell brings experience and leadership after starting all of last season at SAM. The secondary lost lots of players to the draft as well, with three out of four positions needing new starters. This unit looks to have the most potential as weakest link of the entire defense, although that was the case in 2011 and that year the secondary finished 9th overall against the pass.

Since 2009, Rutgers has never finished lower than 8th in blocked kicks and punts. RU tied with UCLA to lead the nation with nine blocked kicks/punts in 2012, and finished 2nd in 2011. Joe Rossi enters his second year as special teams coordinator and should have no problem continuing the trend. Newly converted S Jeremy Deering was always a threat to bust a huge return whenever he touched the ball, so the return game should be at least decent. I won't waste too much time on punting/kicking, but at one point Rutgers had a 6'5" Australian punter on the roster. Alas, he is not listed anymore. Here's to hoping he finds his way on the two-deep.

I know recruiting is not the end-all when it comes to football success (shut up Michigan fans), but it's the middle of summer, there are still two months to go until kickoff, and obsessing over arbitrary rankings that change every day is a rite celebrated by every true college football fan. Rutgers has picked up some key commitments as of late, pushing the class up in the myriad of recruiting sites. RU is currently sitting at #24 on ESPN, #15 on Rivals, #21 on Scout, and #18 on 24/7. I realize that NSD is in February and a lot can change since then, and also that several B1G programs have yet to close on several recruits. However, these numbers can serve as a good barometer and even with a drop of 10-15 spots, it will still be a decent class (obviously just based on numerical rank, not accounting for sleepers that turn out to be studs and/or top recruits that bust).

The only team that Rutgers is clearly trailing is Louisville, and based on current projections the majority of college football will be chasing the Cardinals as well. Competitive games include @ Fresno State and versus Cincinnati. It's basically a Conference USA 2.0 (3.0?) schedule, and I don't truly expect RU to lose to the likes of Memphis or Houston. UCF is entirely capable of an upset, especially since the game is at Bright House Networks Stadium, but I trust that RU will be favored when both meet.

Non-conference matchups include aforementioned Fresno State, FCS-foe Norfolk State, MACtion squad Eastern Michigan, and at home against Arkansas. Depending on how the defense gels, I can see the win-loss record to be anywhere from 10-2 to 8-4 (7-5 should be the absolute minimum). I definitely project Rutgers to be closer to the higher end of the spectrum. I'm sure reading about a de-facto Conference USA schedule is mind-numbingly boring, so if you're still with me here, congratulations.

If you're talking to a Rutgers Scarlet Knights fan...

How to run an athletic department, MTV's Jersey Shore, anything college football related between the years 1870-2000 (except '61 and '76)