B1G 2013 // Keeping The Enemy Close: We Will Always Be At War With Michigan

Enough of the touchy-feely and/or indifferent hate. Grab a notebook and a #2 pencil, because we're going old school today.

Share All sharing options for: B1G 2013 // Keeping The Enemy Close: We Will Always Be At War With Michigan

Let's make one thing clear: this isn't a touchy-feely sympathetic hate, this isn't a post of indifference masquerading as hate, and this isn't some contrived, 21st century, everybody-gets-a-trophy-can't-we-all-get-along psychobabble bullshit.

This is pure, unadulterated, ‘kiss my ass' sports hate. It's going to be politically incorrect, have bad language, more than one tasteless and possibly bordering on the offensive joke, and the intent is to demean everything Hypoxia Blue and Coward Yellow, so here's your one and only warning:

If you're easily offended, just stop reading and go do something else for awhile. Right now. Don't read this and send me or somebody else from the OTE staff an email later saying your sensibilities were offended, or my language was too harsh, because I give exactly zero fucks and/or hoots in Hell.

And if you do send an 'I'm offended' email, I'll share with the rest of the OTE staff and we will make fun of you. For days. Then we'll publish it and call you a puss and play RichRod's 'You Raise Me Up' speech and piss ourselves laughing.

Because we can, that's why.

As Jim Tressel dominated Michigan over...and over...and over again and the pain of the John Cooper era began to recede, my hate for That Team Up North actually started to ebb. I grew nostalgic for the tough, hard-nosed games that came to define what I feel is the Greatest Rivalry In All Of Sports, and I thought that your team being good was important for The Rivalry. As Michigan wallowed in the glorious Seppuku that was Rich Rodriguez, a part of me began to even feel sorry for those miserable pieces of shit, floating in the toilet we like to call the state of Michigan.

But Michigan beat OSU's worst team in 100 years, and the masturbatory celebrations coming from Wal Mart Wolverine nation would've made Ron Jeremy blush. Michigan then went on to win the most cringe-inducing Sugar Bowl ever and it was proclaimed as the MOST THRILLING WIN IN HISTORY EVER RAWR MICHIGAN IS BACK RAWR RAWR RAWR, and I remembered.

I remembered why I hate your goddamn team.

It's because you're really not that good when it all comes down to it, you've been that way for the better part of a decade, and you won't be anything more than an average football team for the foreseeable future. Yet every year, you get the benefit of the doubt because of what happened over 20 years ago, and people want to believe you'll be good.

Much like they want to believe in Bigfoot or aliens.

Are you closer to the MAC than OSU? Yes...yes you are

See, even when you have ‘good' years and win a BCS game and, on the rare occasion, beat your arch rival, you're still not a very good football team. Let me throw put some numbers for you, buttercup.

How did you guys do with all that 'momentum' in 2012? Went 8-5, lost to Notre Dame, barely beat a bad MSU team, lost to OSU, lost your bowl game. As a matter of fact, let's take a look at the Brady Hoke legacy in Ann Arbor so far:

In two seasons at Michigan, Brady Hoke has piled up a resume that screams 'underwhelming' as often as Bo Schembechler shit himself in Pasadena. The Hokester is...

.500 (3-3) against his three main rivals. Wins are wins, but two of them were against a horribly coached and underwhelming OSU team (2011), and a 2012 MSU team that didn't like to play a key component of the game we like to call 'offense'. Yet it's an upgrade over RichRod, so .500 kicks ass. Whatever.

0-3 against ranked teams on the road (Sparty 2011, ND and OSU 2012. Good try, good effort). Seriously, you can't be considered good if you can't beat your rival in their house.

3-6 against ranked teams overall, and the signature win would probably be a shellacking over Nebraska in 2011 or the Sugar Bowl win. If your signature win is over a program that is still recovering from their own RichRod episode and/or against a team in a bowl that outplayed you in damn near every category except the 'shooting yourself in the foot' one, well, you can't read cursive, either.

But let's look at Hokeamania's total coaching career. In 10 seasons as the head guy at three stops he:

Has yet to win a conference title in football hotbeds like the MAC or the Mountain West.

Has double digit wins a grand total of twice.

Had a running back killed by Jadaveon Clowney on national TV:

If I was a headhunter, and I needed a middle management guy for a middle management position where expectations were so low that 'average' would look to be 'fucking otherworldly', I would have Brady Hoke on the telephone faster than you could say the Zooker works in a bank.

No, really. RON ZOOK WORKS IN A BANK NOW!

Of course, all you end up getting out of all of that is Carpal Tunnel Syndrome, as your pre-season self hype and unrealistic expectations come crashing down around you.

You haven't sniffed a Big Ten title since 2006, haven't won one outright since 2003, and have exactly one half of one national championship in the last 60 years. Minnesota has one half more titles than you do.

Your alleged ‘little brother', Michigan State, has four national titles in that time.

The Buckeyes also have more BCS bowl wins than you have BCS bowl appearances. Grab your mullet clad friends, throw on some jorts, and go rub one out in the Ypsilanti Supercenter over that little nugget, jackwagons.

Michigan football is more over rated than every M. Night Shyamalan movie ever. Except Sixth Sense, which was a bright shining light in a dark tunnel of overwhelming and constant disappointment...much like your 1997 season.

But part of me likes your inability to deal with reality and the self-delusion you always carry into the beginning of the year. You're the only fanbase who thinks that games won in the 1920's somehow correlates to 21st century football.

Because at the end of the day, that's all you have to point to. You can't really look to a signature, statement win in close to a decade. You can't point to even a share of a conference title...in almost a decade. Hell, you can't even point to a division title in a conference that's as down as it's ever been. The only thing you cling to is the fact that Michigan is winning on the recruiting trail.

Yet, you can't even beat Ohio State there, either.

Even so, that accomplishment is about as meaningful as one of your players winning another September Heisman.

When it inevitably all comes crashing down, I thoroughly enjoy the post-game stories and the inevitable comments that come afterwards on Michigan blogs worldwide. If I could sum it all up into one GIF, it would be this:

You just need some time alone to absorb that soul crushing loss. Because there's been a lot of them lately.

And personally, I love it that every season of Michigan football reminds me of one of the last scenes in Willy Wonka and the Chocolate Factory:

But instead of it being one last test before you actually win the whole factory and are named president and CEO, you really do get nothing. To try and make yourself feel better, you run to the attic, rummage through some old storage containers, past the Western Union cables, and pull out some grainy, scratched 8MM homemade films your Dad made when they made the trek to Pasadena to watch a Bo Schembechler coached team in the Rose Bowl.

Of course, those are the sports equivalent of a snuff film. But that's okay, because at least your 'Big Ten Champions' and 'Rose Bowl Champions' t-shirts have come in handy by covering starving African children for the last five or six generations: 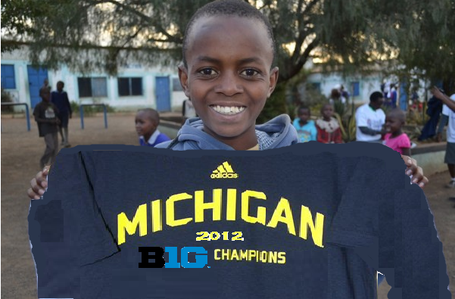 He may be hungry, but at least he'll be nattily clad

Two years ago, your hubris was back in all its unchecked glory. After beating OSU, many of you claimed that ‘The Cooper Years' would be back, and you confidently proclaimed Brady Hoke would coach circles around Urban Meyer and force him into another retirement.

Now? Oh, the hubris is still there, it's born into you like a faulty genetic mutation, like an extra chromosome you see in all the Wal Mart Wolverine fans out there, and it will never go away. But there's a worry there, one that you don't like to acknowledge, but it's there, and not even Warrior Poet Brady Hoke's assurances can assuage you:

Urban Meyer isn't going to resign after a couple years, and regardless of what Hoke is doing, Meyer is a better coach and recruiter than him. Hoke gets the top guy at a position from the state of Ohio? Meyer gets a better guy from elsewhere in the country. Dymonte Thomas? Meet Vonn Bell. Taco Charlton? Hello, Joey Bosa. Michael McCray? I'd like you to meet Mike Mitchell. In years past, this would have been a big deal, as OSU would've likely secured a lower ranked Ohio kid, but not anymore.

And that's bad news for you, because although you're doing a good job of replenishing your roster with talent after RichRod, you won't be able to close the gap that OSU built up. Add in the superior coaching ability of Meyer and his staff, you're looking at another decade of losing, and with the new division format that has OSU and UM in the same division come 2014, you're not getting to the B1G championship game anytime soon.

If that feeling of doom hasn't washed over you yet, it will come November 30th, when OSU punches their ticket to Indianapolis and you punch your ticket to the Motor City Bowl. It will hit you like a brick wall, it will be glorious, and I will love every second of it.

You can run, but he'll find you. And crush you. YOU.

And the world will be a better place because of it.

Fuck Michigan, forever and ever. Amen.