Your Off Tackle Empire Nebraska Shirts

Sherman puts on a Blackshirt

Share All sharing options for: Your Off Tackle Empire Nebraska Shirts

This was not a night time raid, as those were frowned upon in the shrouded, mountainous Tennessee terrain. This was night time troop movement, circa 1862. The Union was moving to control the Cumberland River. Where that battle would be fought, no one knew. Unpredictability creates more fear than almost any other war-time emotion.

For young Nathan Cooper, a 19 year old Lancaster boy fighting in the 1st Nebraska Infantry, this troop movement usually would not have shook his senses. He was fearless, ready to dive into battle for the first time. But tonight, he had heard...rumblings. Fighting was one day away.

As Nathan rested, he heard the clop-clop of horses coming up quickly. The troops moved to the side as the horse slowed to a walk. A figure dismounted and approached Nathan's commanding officer to shake his hand and exchange words. It was dark and the area was only illuminated by the gentle brightness of a lantern. Nathan could barely make out the individual's rank - Major General.

After a short rest, the troops began their marching. Nathan's fellow Nebraskan asked him about the impromptu stop earlier and Nathan told a story he would repeat for years to come -

"That was definitely a Major General of some kind. Why he was wearing a black shirt, I'll never know." 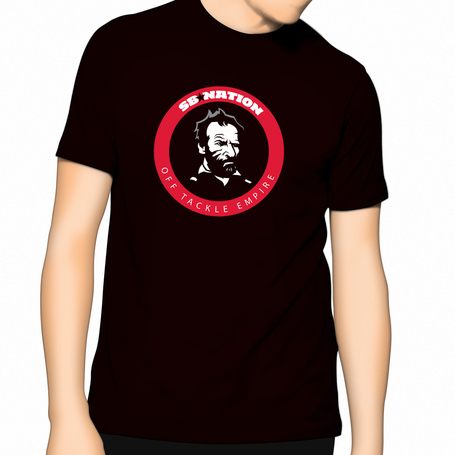 So goes the OTE story of General Sherman and his dark ride into the Tennessee mountains.

Pick up a Nebraska OTE shirt and wear that proudly all over the Midwest.

Here is the direct link:

Jump Around with Sherman.