Today marks the beginning of the end... of the offseason. This is OTE's annual start to the season. Each team, one solid case, and one day closer to the end. We start with Illinois today and will hit on each team in the B1G before football comes back. EXCITING STUFF Y'ALL. EXCITING. STUFF.

In 2012, the Illinois Fighting Illini were - to put it mildly - pretty awful. They finished dead last in the conference in scoring offense, and were eleventh overall in scoring defense. When you cannot score points and allow a ridiculous amount of points, you lose games - lots of them. In fact, last year the Illini lost ten games, including all of their conference games, and any hope that the transition from the Zooker to Beckman was going to be easy faded quickly. Despite all that, the Illini still managed to have four players drafted by the NFL in April.

So yeah, needless to say, this team was pitiful to watch, probably alienated a good portion of whatever good will it had with the fanbase, introduced the world to the folly of Tim Beckman and this gorgeous monument to stupidity on YouTube, and made Illinois the prohibitive favorites to be in the cellar for the foreseeable future. The history of the Tim Beckman experiment is not-so-good right now, and while it is incredibly difficult to go two years in a row without a conference win, the future does not look bright.

Ladies and Gentlemen of the jury, today we are taking a journey into finding some positives in the Illinois 2013 campaign. Sure, they are here on trial for pretending to be a football team in 2012, but that does not mean that past grievances should be held against them as we move forward. In fact, there is a strong argument to be had that it might be impossible for things to get any worse in Champaign, and in seeing the upsides in bottoming out, we might be able to see a slight bit of sunshine in the clouds over the Illini.

Look, I'm not going to lie to you all. This team is bereft of major talent, major experience, and great coaching. We cannot simply write of Beckman yet, but until proven otherwise, this is a project that is in need of a lot of work, but the HOPE starts with one of the biggest hires in the Big Ten last year - Offensive Coordinator Bill Cubit.

Cubit brings a new element to the Beckman regime - order. Rather, instead of the insanity of two coordinators trying to understand how to call plays in progression, Cubit has one vision that can be installed, implemented, and tweaked accordingly. You find this to be too rudimentary of a change? As noted in our Coaches Preview of Illinois earlier this offseason, Beckman had two coordinators who would call plays. One on 1st and 2nd down, the other on 3rd. Sure, it might have been a way for the Illini to think outside of the box, but finishing last in scoring means it was not exactly a noteworthy approach. Cubit won't let that happen.

It is also worth mentioning that Cubit has an executive presence, being a former Head Coach himself, that can only help to stabilize the Illini team. The Illini also boast the services of seventeenth-year veteran Nathan Scheelhaase. The experienced QB has had to deal with more change than any one guy should, but he has some talent and ability, and his leadership should prove to be invaluable. Heck, if Illinois can string some first downs together, a decent defense should get a few breathers next season.

With all that said, the expectation here is not a championship, it's progress. This is not a bowl-eligible team, but anything better than last year - even statistically - and we will call this a win. The question that will be lingering all year: Is Beckman the man for the job?

Ladies and gentlemen, if I were to liken the Illinois Fighting Illini football team of 2013 to any one thing in the world, I would compare it to the WaCo, and we are not talking about the city in Texas. No, this is the Waffle Taco, the experimental breakfast food sweeping the nation at Taco Bells everywhere. To wit, here is a photo a friend took at the test pilot here in Omaha: 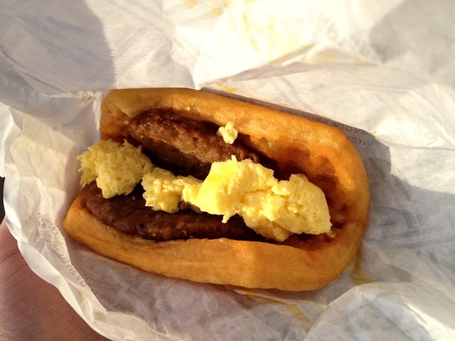 Now, why would I compare Illinois to a fairly unholy alliance of fried waffles, terrible looking breakfast meat product, and egg? Well, honestly, I was really excited to use this image of a Waco. That aside, I think this product is a great analogue for Illinois football. Think about the WaCo for a moment. It sounds like a good idea. Who hasn't had a waffle for breakfast and wished it was something more. Maybe you could roll it up like a waffle burrito filled with syrup and eggs and bacon. Perhaps the waffle would be the bast of something great like a breakfast pizza. Then it hits you, the breakfast pinnacle would be a waffle taco - it was genius. However, in the hands of non-genius, even good ideas fail.

In the case of the Illini, football should be very successful. They, in theory, have access to great recruiting. Tim Beckman, in theory, is a decent coach. Heck, in theory, this team should win more than two games next season. Unfortunately, the product has a lot of failure written all over it. Similar to the potential of the WaCo, or gross sketchiness of the product itself, the Illini find themselves in a bit of a quagmire. Perhaps they'll rise from the ashes and be the best team they could expect, or they'll leave fans - like consumers of the WaCo - sad and bloated. Thus ends a not-so-useful comparison to something in Pop Culture.

I have but one question to leave you all with. How would you feel if you were an Illinois fan? It has been well documented on Off Tackle Empire that Illinois cannot, in fact, have nice things. Can you imagine a life where you have no nice things ever? This goes beyond wins and losses too. Illini fans suffer at the fate of Tim Beckman and his infinite sadness. They are not Chicago's Big Ten team, they are hardly Illinois' Big Ten Team, and honestly, they barely have the look of a Big Ten Team right now. It has been a long journey for the Illini faithful, and it might not hurt to throw them a bone.

And so, I urge you all to take it upon yourselves to reflect on the less fortunate and do what you need to do so that you can root for the little guy come August 31. I do not ask you to hope for Illini wins come conference play, but it would go a long way if you would rejoice with the Illini fans as they take down Cincinnati and Washington. And if you can't? Well then you, my friend, are a terrible person. You don't want to be a terrible person. Root for the Illini.

If all of that fails to strike a chord with you, then root for the guys who are seniors on this team. They've endured the end of the Zook regime and the beginning of the Beckman regime. This isn't their fault, and they deserve better. Let's let Illinois have a few nice things before Big Ten play.

A. The Staff Calls It

Um, this... this is not so good. The staff does not think highly of the Fighting Illini.

So yeah, not good at all. Right now, babaoreally thinks higher of the Fighting Beckmans than all of us and Hilary barely thinks less of them. I do not have who people think the wins come against, but I am pretty sure it's probably some mix of beating Southern Illinois, Miami (OH), and one of the AQ guys. In my case, I don't think they beat an AQ team this year. Illinois everyone!

Coming Soon: Closing Arguments for Everyone!