Three B1G Questions: Who wins the Big Ten if not Ohio State

Each week, we'll round up thoughts about football from bloggers on SB Nation's 12 fine Big Ten blogs. They will say dumb stuff. This week, we ask who wins if not Ohio State -- and who could lose in a super-easy week.

Share All sharing options for: Three B1G Questions: Who wins the Big Ten if not Ohio State

Hey fellas! I'm Rodger, SB Nation's Big Ten league manager and author of Sippin' on Purple. You can obviously get all the Big Ten football info, opinions and hatred you need right here at Off-Tackle Empire, but it's worth pointing out that we also have 12 awesome team-specific blogs where people can be even more irrational about the upcoming football season.

Anyway, every week we're going to get the feel for what's going on around the conference by asking those bloggers Three B1G Questions -- quickies about the way things look around the Big Ten -- and we're going to round up their responses here.

With the season set to kick off in oh, six hours, our first batch:

1. The presumptive B1G favorite is Ohio State. If you weren't allowed to pick the Buckeyes, who would be your choice for Big Ten champion?

We had a wide variety of answers here, but the winner was Michigan.

Michigan, by process of elimination, if nothing else. In the Leaders, Penn State can't win the title anyway, but should begin to feel the effects of the NCAA sanctions. Wisconsin has been losing Rose Bowl after Rose Bowl for years, but I expect them to have a few growing pains under a new coach. And the other teams in that division... well, let's be kind and just admit that they aren't winning the Big Ten. In the Legends, Iowa and Minnesota have too many question marks (and/or a lack of talent) to contend. Warning sirens go off every time I look at Michigan State's offense; Andrew Maxwell is REALLY going to start for them? Northwestern has a lot of buzz, but I don't see them being quite good enough on either side of the ball to win the league. Then we're left with Michigan and Nebraska and so long as Nebraska's defense remains so LOL-worthy, I'd have to favor Michigan. That said, I do think Michigan appears to be a very good, well-rounded team this year, too, so it's not just a pick for them because they have the fewest flaws of everyone else. - RossWB, Black Heart Gold Pants

Although the Michigan haul was pushed over the top by a biased pick:

It may just be my boundless optimism or the fact that deep down I'm a shameless homer, but I have to go with Michigan. Nobody else in the Leaders division really scares me, and I think Michigan is probably the most balanced of the four Legends challengers. -- Zach Travis, Maize N Brew

Also getting nods were Nebraska: 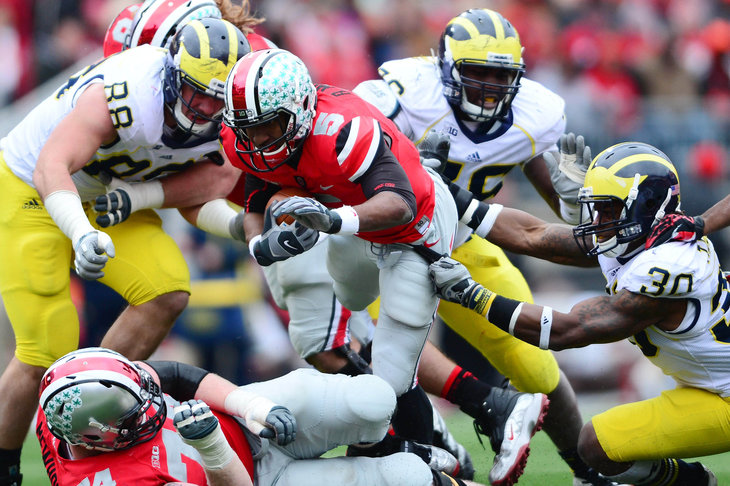 Everything you need to know about the year in B1G.

If forced to choose somebody else I'd go with Taylor Martinez. Aside from Braxton Miller he's the best quarterback in the conference, and although he is who he is at this point, he's still good enough to lead that team to a Big Ten title. And then fumble. Probably. -- Tom Fornelli, The Champaign Room

Aside from Ohio State, Wisconsin is the favorite in my mind between the apparently smooth transition the Badgers have made to the Gary Andersen era and their remarkably smooth schedule. Interesting enough, their season -- in terms of reaching a third straight Big Ten Championship Game and fourth straight Rose Bowl -- will likely come down to the Sept. 28 game at Ohio State. Win -- and yes, Wisconsin fans are growing more confident by the day -- and the Badgers could be in the driver's seat to Pasadena. -- Mike Fiametta, Bucky's 5th Quarter (yes, bias again)

And one vote for Northwestern, surprisingly not by me:

Northwestern. They return a good chunk of starters from a tough team who could have gone undefeated if it weren't for a few fourth-quarter collapses. Plus, Kain Colter and Venric Mark might be the most athletic QB/RB duo in the nation. If the Wildcats can finally fix this issue and begin closing out games, they can beat anyone on their schedule. Jared Slanina, Black Shoe Diaries

2. Before the season starts, you're only allowed to pick one Big Ten game to watch besides your own team's games. Which one do you choose?

I had thought, perhaps, in my heart of hearts, the favorite here would not be The Rivalry.

You kind of have to go with Ohio State and Michigan, right? I mean, that's a rivalry right up there with Purdue and Iowa.-- Tom Fornelli, The Champaign Room

However, the fact that both teams are so good this year actually somehow makes this game less interesting:

I'm gonna go with the boring, traditional answer: Ohio State-Michigan. I think the rest of the league is too good now for Meyer and Hoke to fully take things back to the 10 Year War days of Woody and Bo's OSU and Michigan teams dominating everyone else, but they are re-establishing their programs as the top two ones in the conference. This might be the one and only year that we get two incarnations of the The Game: the regular season finale and an immediate rematch in the Big Ten Championship Game. So, yeah, give me Urbz and Brady, Miller and Gardner, Script Ohio and Hail to the Victors if I can only watch one other B1G game this year.RossWB, Black Heart Gold Pants

Second place isn't your typical MUST SEE material -- the first game between Northwestern and Ohio State since 2008, under the lights at what should be a very Ohio State-friendly Ryan Field:

I'm going with Ohio State at Northwestern. It's early in the season and may decided if the Wildcats can win the Legends or not. This game is going to be a shootout and should be so fun to watch. Northwestern can pull off some upsets at night, and it may be the best chance for someone to prevent Ohio State's undefeated hopes. Chris Vannini, The Only Colors

Rounding out the bunch were Wisconsin-Ohio State: 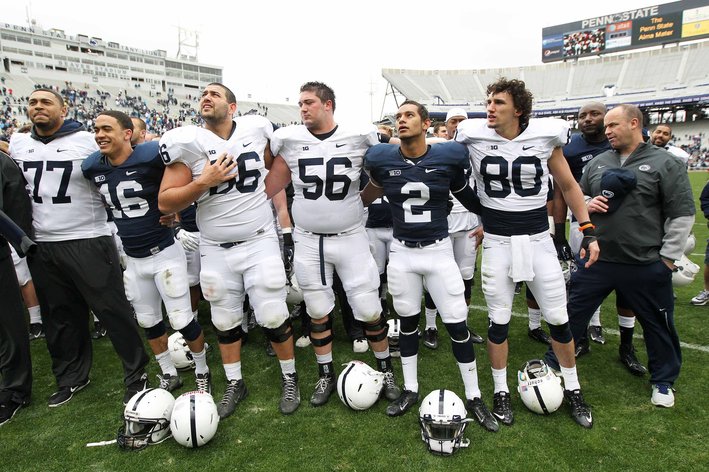 The final take on each B1G team from OTE's staff

I think this will be the first game that is any sort of actual test for Ohio State and I could see Wisconsin grinding it out to the very last minute. The conference would get very interesting very early if Wisconsin could pull the upset. AJ, The Crimson Quarry

The lone vote for a game not including Ohio State came from the Ohio State blogger, who was obligated by the terms of the question to pick a game besides Ohio State:

Nebraska at Michigan will probably either decide the Legends title or at least have a lot to say about who wins. That's absolutely going to be a great game. -- Matt Brown, Land-Grant Holy Land

So, yes, Ohio State will be good and we would like to watch them play football.

3. Goodness gracious, there are a lot of cupcakes this week. Scrolling down the B1G schedule, which team do you think is most likely to start the year 0-1?

The answer on this was RESOUNDING: Purdue.

Pretty much has to be Purdue right? A road game against a pretty decent Cincinnati squad is going to be a tall order for a young team breaking in a new coach. Matt Brown, Land-Grant Holy Land

You oughta be proud, Purdue.

Two people mentioned Iowa as their choice. But only one did so with the passion that only a terrified fan can muster:

I'm sure everyone else is going to say Iowa here, and who am I to deny the compelling power of groupthink? Especially when it's probably right in this case. Iowa's coming off a 4-8 season, with question marks at QB, WR, DL, and in the defensive secondary. They have four new coaches and ended last season on a 6-game losing streak. They're playing a Northern Illinois team that went 12-2, played in the Orange Bowl and barely lost to Iowa a year ago. Oh, and they have Jordan Lynch, who accounted for something like a billion yards last year. Throw in the fact that Iowa is a notoriously slow starting team out of the gate and you definitely have the making of an upset. Now if you'll excuse me, I need to go find my straight razor.RossWB, Black Heart Gold Pants

Getting an honorable mention, but not a selection, was Northwestern, who are somehow a) a possibility to win the conference b) candidate for most exciting game of the year c) capable of losing Week 1?

The other game I'd be wary of is Northwestern and Cal because heading west and playing late is tough on its own, but tougher during the first week of the season. And although Cal is coming off a down year and a coaching change, there's still talent on that team.