Everybody's screwing up in the Legends Division, Nebraska is weird, and how does the B1G look vs. the Pac-12 after a week they went 1-2* against their Western foes?

Hello, B1G friends! Today you should stop reading this thing I'm writing and go read Bill Connelly's road trip story. It is soothing and pretty and hearkens back to a better time, when the Big Ten was more peaceful (that time being Week 2.)

Here, we've asked SB Nation's Big Ten bloggers to describe the frightening world that is Week 3 in the Big Ten. I suppose the good news is that with Purdue playing Wisconsin this week, the Big Ten schedule will start and it begins in earnest next week, and that means we won't have to play any of these mean teams from other leagues anymore.

But for now: Worrying time:

1. Nebraska imploded on the field, then off it, Michigan nearly lost to Akron, Michigan State has no offense whatsoever, and Northwestern is, by all accounts, still Northwestern. Who's your pick in the Legends Division after three confusing weeks?

The majority -- not a plurality! -- of the responses were in favor of Northwestern. Cats and dogs snuggling, pigs blissfully alighting on trees, Rick Reilly writing a sensible,, humorous column everybody can agree with. However, it's not like people were super-high on the Cats:

This seems to be a division of who will screw up the least down the stretch. Those N'Western folks are supposed to be all focused and smart and stuff right? I think the Cats have the most going for them right now. Certainly their ceiling isn't the highest of the division but they're consistent. Over a 12 game season, consistency may be the most valuable asset -- AJ, The Crimson Quarry

I'll go with Northwestern because they're the team that has looked the least worst at times. Cal gave them a scare, and they needed some fluky pick-sixes to win, but that's an opener on the other coast at night. I'd put MSU, Michigan and Nebraska all at 2abc right now. -- Chris Vannini, The Only Colors

It has always been Northwestern. They are getting. Shit. Done. While they have guys like Venric Mark out injured. They have looked the best simply by lying in the weeds and taking care of business while their opponents have shown their flaws. Should the Purple upset Ohio State and undefeated season may even be in order. They are that good. -- Travis Miller, Hammer and Rails

What we want in the non-con, Week 4 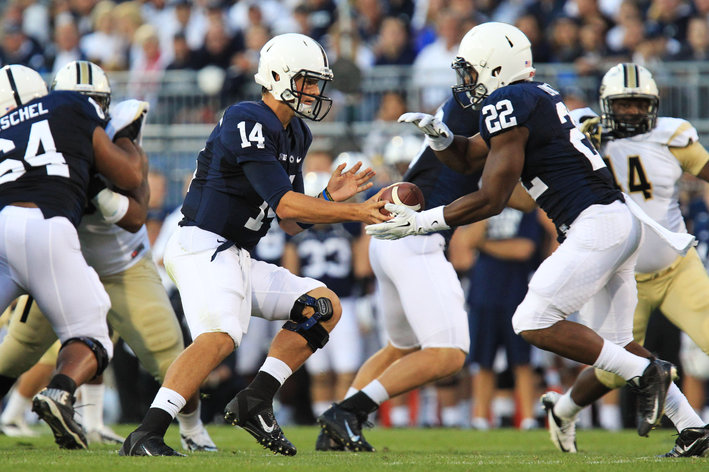 Northwestern is the most balanced team of a flawed division, and although they have a tough schedule, I like their chances over everyone else right now. -- Ted Glover, LGHL/OTE

As a Northwestern fan, I'm not sure how to react. On the one hand, it seems nice, on the other hand, I'm convinced y'all are setting me up for the long con and I want you to stop. I'm just kind of giddily laughing like y'all are crazy.

There were also a few calls for Michigan:

Last week's game doesn't worry me at all. These are college kids we're dealing with, consistency is going to lack from time to time. So it's only natural that after coming off a Notre Dame win the players might take their foot off the gas for Akron. The only thing that actually worries me with the Wolverines is a lack of a running game, because Devin Gardner is not supposed to be leading this team in rushing. -- Tom Fornelli, The Champaign Room

In the end it will still be Michigan at the top with Northwestern and Nebraska pushing them.  Jerry Kill was asked about Michigan's near loss and he said something to the effect that Brady Hoke won't let that happen again this year.  I tend to agree. -- The Daily Gopher

Jared Slanina of Black Shoe Diaries hedged his bets a bit with "the winner of Michigan-Northwestern," but sided with Northwestern if he had to pick.

Nobody had nice things to say about Nebraska or Michigan State, or, for that matter, Minnesota or Iowa :(

2. If your coach called out one of your school's best players and had a secret tape of him cussing out your fanbase, would you want him fired? Are Nebraskans overreacting to Bo-gate?

I'll let Jon bat leadoff on this one:

I don't think Husker fans are over-reacting. Initially, fans were very upset with Pelini, but when fans stepped back a bit it was clear the tape was released solely to embarrass the head coach. The tape was two years old, and while Pelini has earned a reputation of having an explosive personality, he's actually mellowed quite a bit over the past year.

With regards to Pelini "calling out" Tommie Frazier - I'm not sure what people would have him do when Frazier calls for Pelini and/or his assistants to be fired. Frazier was obviously a great football player, but he was also a coach - he coached at Doane College, a little Division III school in Nebraska. He had a career record of 3-19, and so many players refused to play for him that by the time he was fired there were only 40 players suiting up. Husker fans love Frazier for his on-field play, but to call him a judge of coaching material - you and I sitting in a bar surrounded by four beers could do as good a job.

Nebraska football fans are overall the geekiest college football fans in the nation. By and large, most don't care if Pelini hates our guts. We're not going to holiday dinners with him. He needs to run a clean program and win football games.... okay, really he just needs to win football games. Win a Big Ten Conference title, and I'll call him on the phone so he can tell me to go eff myself personally. -- Jon Johnston, Corn Nation

The general theme of several responses were the Nebraska fans might have their standards a tad too high...

Just win, baby. Just about any fanbase in the county would love the 9/10 wins Pelini is bringing Nebraska on an annual basis. Tom Osborne's Nebraska isn't coming back. It's a different landscape in college football today. What Nebraska had as an advantage in the past (caring and investing more in football) is no longer the case. If they don't want to win 10 a year, we'll take it. -- Chris Vannini, The Only Colors

... there was also a general consensus that the people who were over the top were a slim minority of people:

For the most part, the fans I've interacted with think the whole thing is stupid. I think the only Nebraska fans who really think Pelini should be fired over this are the ones that already wanted Pelini fired in the first place. But those that do want Pelini fired should be careful what they wish for.-- Tom Fornelli, The Champaign Room

That said, some people understood the Fire Bo crew:

I don't think Nebraskans are overreacting to Bo-gate as much as they are using it as a way to channel their frustration at not winning a conference title or going to a BCS bowl game in over a decade.  If this is what they need to bring in a new guy and jump start the "Return to glory" crusade, who am I to judge? -- Zach Travis, Maize N Brew

Be careful where you aim that frustration 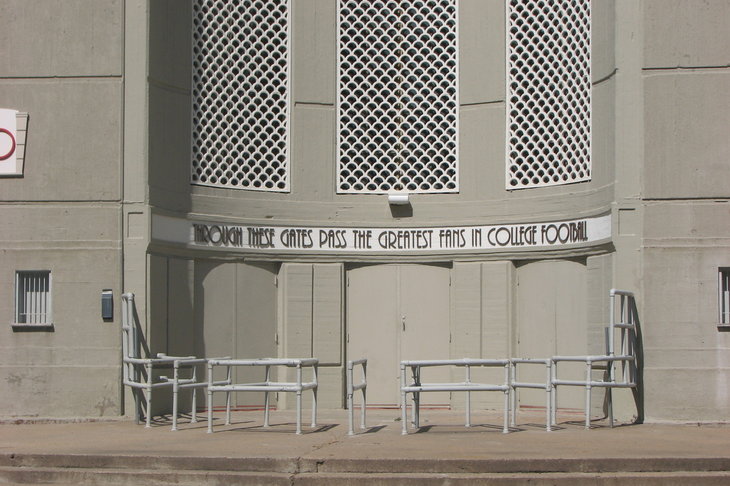 One of Corn Nation's great takes on Bo-gate, asking them to be thoughtful before calling for firing

Over reacting to this one thing? Yes.  But when you take everything else in to account, this could very well be the proverbial straw that broke the camel's back.  Pelini has done a hell of a job getting Nebraska back from the horror show that was the Bill Callahan years, but...there's always been a bit of a loyalty question about Pelini towards Nebraska--he's not a graduate and a certain faction of the fanbase claims he never really seemed to embrace eveything about the school and their traditions, and was always looking for the bigger, better deal.  His recruiting has been just okay, but the thing that's killed him is that Nebraska gets pantsed, and I mean flat out embar---Wisconsin scored again---against good competition in big games.  That's what's unforgivable, and if he gets fired, that's going to be the thing that gets him ousted.  Everything else is just kindling on the fire. -- Ted Glover, LGHL/OTE

But personally, I liked this response that didn't fit into any of the above:

It would make me respect [BOB] more. I guarantee every single coach in America has made nasty comments about their own fanbase at some point, especially the ones with a Twitter account. Fans will never give the opponent credit, and have no idea what it takes to build a championship-level program. Fans will turn on a coach after one bad outing, so why do we get to demand their undying loyalty? I follow the sport because I love watching hard-fought football games, not because I want my ego stroked by some guy who has way more important things to do than worry about my feelings. -- Jared Slanina, Black Shoe Diaries

3. On Saturday, Ohio State soundly beat Cal, UCLA soundly beat Nebraska, and... well... let's just say the Sun Devils and Badgers played a very even matchup. Actually comparing conferences top-to-bottom is a little bit tough, if Ohio State went undefeated, do you think they'd have a claim to a national title berth over an undefeated Oregon or Stanford team?

Hey, Ohio State: prepare to do some scoreboard watching.

Zero chance an undefeated Ohio State goes in ahead of an undefeated Pac-12 team. Maybe if they beat an undefeated Michigan and a 1-loss team in the B1G Championship game, they could have a chance, but there just aren't going to be quality wins. -- Chris Vannini, The Only Colors

This all is fun for our Michigan Man:

Ohio State?  Wisconsin, Northwestern, and Michigan are the only currently ranked opponents, and Cal is the only non-conference opponent with a pulse.  Ohio State also misses Nebraska and Michigan State - two semi-legitimate threats from the other division.  Doesn't matter which Pac-12 team is undefeated, that team has more claim to a title game berth.  Hate hate hate hate hate hate hate. -- Zach Travis, Maize N Brew

The only person willing to stake a title claim for the Bucks, was, well, the Buckeye guy:

Assuming Michigan or Northwestern is only a one loss team going into the B1G championship game, [they do have a claim].  Those losses would have been against OSU, and they should be pretty highly ranked, and OSU would have to beat one of those teams again in the Big Ten Championship game.  Outside of Stanford or Oregon, who in the Pac-12 stands out head and shoulders above anyone else in the Big Ten?  USC is a mess, UCLA is Wisconsin, Washington is MSU with an offense.  There's not a lot of difference between the two conferences, so yes, I do think OSU would have a legitimate claim.  Would it happen?  No, I don't think so, even though they would be 25-0.  People have been talking down OSU and the Big Ten since March, so if OSU runs the table and there are undefeated teams from three BCS conferences, I half expect OSU to be on the outside looking in.  BUt then again, Urban Meyer is one hell of a salesman, and I doubt he would say "I'll let the voters decide" like Lloyd Carr did in 2006, so we'll see. -- Ted Glover, LGHL/OTE