B1G Brotherly Love Or: How I Learned to Stop Worrying and Love This Conference

Outside of traditional rivalries, there are many fan bases in the Big Ten that actively hate each other. Here, I explain why that's just not the case for me.

Share All sharing options for: B1G Brotherly Love Or: How I Learned to Stop Worrying and Love This Conference

With Indiana on a bye this week, I needed something to write about. As I pondered what to write about, I came across some strong opinions, mostly related to the fact that "everyone should hate Iowa." I found this curious, as despite a couple of unfortunate losses in the last couple years, I as an IU football fan had no real reason to hate Iowa. The same idea sprung up when I read that "no one in the Big Ten wants Maryland and Rutgers." I was confused, because again, other than reasons related to the 2002 NCAA Final Four, I had every intention of welcoming our newest members with open arms next year. It was then I had an epiphany: I must spread a message of peace and love to the rest of the B1G, for though we do not share accomplishments as the SEC does, and though we all have been known to worship at the altar of schadenfreude, we need not hate each other simply to hate.

I now present why I do not hate (most) of the Big Ten:

Maryland and Rutgers: As they are not yet fully members, they do not receive separate entries. However, as they have not yet officially joined the league, we have no reason to hate them yet. They were brought into the fold to make us stronger, and until they show otherwise we should should respect them as such. If you cannot hold back your hate against them for any other reason, just remember: At worst, they can provide your non-revenue sports with more conferences victories soon.

Nebraska: Potential creepiness factor from their mascot aside, the Huskers brought a proud tradition into the B1G. They have been a strong representative of the conference in football, and mostly a harmless nuisance in basketball. I longed to see my Hoosiers test themselves against what my childhood memories tell me was one of the best football programs ever, but alas, it has not yet come to pass. Thus, I cannot get angry at Nebby, when I hardly get to see them.

Penn State: Their once proud image has already taken some hits, and Bill O'Brien is doing good things. If we actually beat them next week, any reason I ever had to hate the Nittany Lions will be gone forever. As it is, that 0-fer is pretty much all I've got.

Iowa: Why don't I hate Iowa? 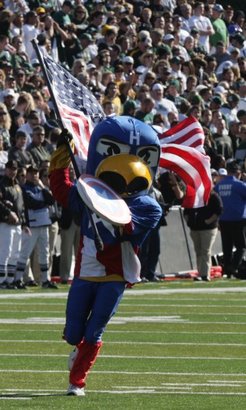 Minnesota: The Golden Gophers have had similar problems recently with their football team to what IU has experienced for....basically, forever. I feel more like kin to them than an enemy, and I would be honored if any of them felt the same way. 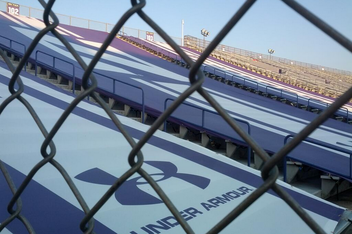 Can you hate that which you pity? Personally, I say no.

Michigan: For a team that hasn't truly been dominant for a while, Michigan fans have been known to get a little mouthy. However, they also provide us with such glorious moments as this:

Ohio State: Since I didn't grow up in the state of Michigan, I don't see what the big problem with Ohio State is. (Full disclosure: I almost went to Ohio State, and their ungodly expensive out of state tuition was a major reason why I didn't go there.) The only reason I can even muster much hate for them during football season is their bi-annual take over of Memorial Stadium.

Wisconsin: As long as Gary Anderson doesn't continue Bert's proud tradition of kicking the crap out of IU on the ground, we're good, Bucky. Also, I wasn't really that fond of Bill Lynch, so that almost balances.

Michigan State: One week a year, I can actually find hate for Sparty. 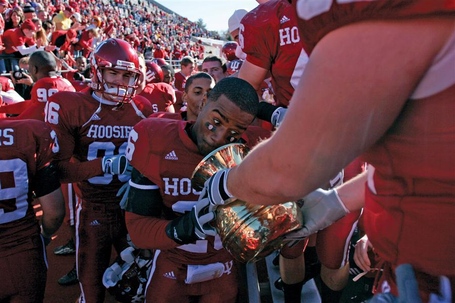 The rest of the year, I just let SPARTY NOOOOOO! take over. Another order of tinfoil for EL.