Where We Be, What We Be Drinking: Week 5

Share All sharing options for: Where We Be, What We Be Drinking: Week 5

I've said it before and I'll say it again. Leave your whereabouts and drinkstuffs in the comments, and we'll talk about fun things like watching football with quality beverages.

Brian Gillis
I'll be in Los Angeles, and if it weren't for Verne Lundquist and Gary Danielson, I'd probably tune into the LSU-Georgia game in the morning. But since I can't stomach CBS and its SEC coverage, I'll probably enjoy the sunshine during the day and retire to the couch in time for the battle in the ‘Shoe, where I'm hoping Wisconsin can at least give OSU a game ... but I don't see it happening.

MNWildcat
I will be home in the great state of Minnesota for a retirement party on Friday night, and as my 'Cats won't be playing this Saturday, I will be watching one game and one game only: The Battle for Floyd of Rosedale. I likely won't drink, as I'll be driving to have dinner with family later in the day, but may enjoy some piggy treats for breakfast before settling into the couch to see Minnesota run it down Iowa's throat (please be true please be true please be true). Picking up multiple (where x > 3) cases of Schell's crafts to bring back to Milwaukee with me when I'm done. Home is awesome.

babaoreally
I'll be in West Lafayette watching the worst offense in the conference (sorry MSU) take on a MAC team that already knocked off Iowa this year. Sure Iowa isn't that good, but so far they look like the '85 Bears compared to Purdue this year. I might drink some gasoline, but probably E85 because at it is corn based.

hail2orngeNblue
I'll be dancing with Cinderella one more time in Champaign before we get the B1G wake up call, a giant Big Red ear of corn right between the eyes as the clock strikes midnight in Lincoln next week. Redneckin' it up with Busch Light in the cooler and Johnsonville brats over the Kingsfords.

Ted Glover
Going to aerate and overseed my lawn Saturday morning and then doing something that my wife wants to do, which I'm sure involves something hideously un-fun, like antiquing or furniture shopping, or God knows what. However, that allows me to build enough credit to watch the Iowa-Minnesota game AND the OSU-Wisconsin game AND the VIkings game on Sunday, so WOOOOO HIDEOUSLY UN-FUN THINGS! Once Iowa-Minnesota starts I will be texting my two heathen Iowa brothers back and forth and will taunt them mercilessly as Floyd returns home to Minnesota...or they will be taunting me.

I'll take a break between that game and the OSU-Wisconsin game to cook animal flesh over an open flame to a medium rare perfection, then I will settle in and enjoy the night atmosphere of the Horsehoe, while drinking some Leinenkugel's Oktoberfest and Hoppin' Helles beers.

Jesse Collins
I will be back in Omaha, and look forward to enjoying the day's slate of games from the comfort of my couch. However, since there is no Nebraska game - and because I was on vacation and have a million errands to run - I look forward to also enjoying the fine OTE Writer's Tradition of not watching football in favor of obnoxious menial tasks. To accomplish everything, including catching some games hopefully, I will most likely be drinking coffee and Red Bull. I figure if it works for Holgo, it works for me.

Green Akers
Graham makes a good point about Uncle John's, so Saturday morning I might skip Gameday in favor of heading to the cider mill for that sparkling peach wine. Don't knock it till you've tried it, man. I'll then be hanging out in Ann Arbor for a bit on Saturday afternoon, where I should be able to catch the early and afternoon games. Then, to fulfill my OTE duties, I'm going to a concert in Detroit instead of watching the biggest game of the conference season so far.

Candystripes for Breakfast
As IU is having their first round vs BYE this weekend (I really hope both offense and defense choose to show up), I haven't really settled any plans for this weekend, but I can guarantee that for at least part of it, I will be in Lebanon watching a football game on a TV. As far as what I'll be drinking, that too is completely up in the air, but the odds favor a non-alcoholic drink of some sort.

C.E. Bell
In advance of my mom coming into town to attend the wedding with the dry reception on October 5th that will cause me to miss Ohio State vs. Northwestern in Evanston (curse you family obligations!), I will be spending Northwestern's bye week assisting my wife in cleaning our condo from top to bottom, running errands, playing golf with my friends, hitting the gym, and generally fulfilling my OTE-writer obligations by ignoring college football until the Ohio State-Wisconsin game. We're also starting to look to buy a house, so we'll be spending a lot of time planning out a route of open houses to visit on Sunday. Maybe we'll go to Home Depot. Yeah, buy some wallpaper, maybe get some flooring, stuff like that. Maybe Bed, Bath, and Beyond, I don't know. I don't know if we'll have enough time.

I will be drinking Friday night, though, at Violet Hour in Chicago, which means insanely strong, Prohibition-era bourbon cocktails (and almost assuredly a hangover on Saturday). And if the weather is nice, I'm sure we'll open a nice bottle of wine and sit out on the deck some Saturday evening -- maybe a nice Cabernet, or a Malbec, depending on what we make for dinner.

Graham Filler
Running in the morning and then settling down with delicious Uncle Johns Cider Mill hard cider to catch some games. This is the best place in the world. Link. Donuts pumpkins apple cider apple orchards hayrides. Amazing.

Oh and please Miami OH, score at least one touchdown?

Hilary Lee
I will be home in Chicago, for the first time in what seems like forever, to see allllll the games. At some point I will be watching the OSU-Wisconsin game in a bar somewhere, but I don't know where. I will be drinking beer. Lots of beer.

Back to back weekends in Minneapolis? And it's HATE WEEK? I can work with that. I'll be at The Daily Gopher's tailgate in East River Flats Park along the Mississippi on The U's East Bank Campus. I'll be enjoying some Finnegan's Irish Ale and Grainbelt Nordeast, along with whatever delicious brews the rest of the TDG staff and community bring. And in honor of Floyd, we'll drink beer from this: 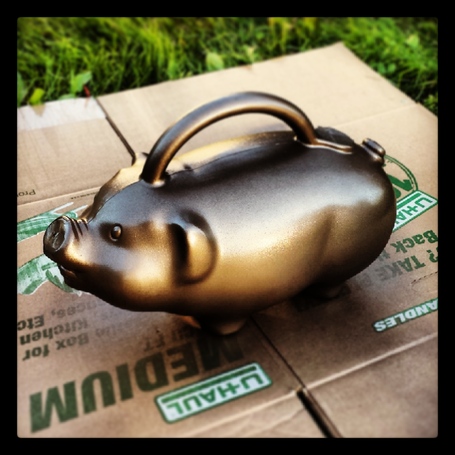 (Note: It looks less gold when you don't take the pic at sunset.) I'll have some Four Roses Single Barrel along as well. As for food, we're looking at a tasty tailgate breakfast prepared by JDMill and my buddy's delicious onion burgers and brats for lunch. All of which should have us totally ready to watch the Gophers go out and FREE FLOYD!