Continuing a classic from last season: One player. One beer. ONE TRUTH.

We at Off Tackle Empire love our football (though we rarely watch the games), we love our beer, and we love enjoying them simultaneously. Don't lie: you know you've snuck a pocket beer or two through security at some point in your adolescence. One of our favorite features is to choose a site-wide player and beer to highlight for their respective performances on the field and on the palette (though don't confuse the two).

It was a heated selection process marred by in-fighting, controversy, and stories of mattress jousting (just ask Green Akers), but the outstanding defensive performance of Collin Ellis earned him our first OTE POTW award of 2013. To recap, Ellis:

Now, you might be saying to yourself, "Sure, Cory, those were nice returns and all, but they were tips, and he just happened to be in the right place at the right time!" Well, Mystery Internet Commentor who already knew my name, to you, I say,
"Well, sure, but the ability ever to score two defensive touchdowns in one half, regardless of the circumstances, especially with that long of a run, merits a mention and reward as our (highly influential and widely regarding) Off Tackle Empire Player of the Week."
But you're not here to listen to me drone on about Collin Ellis. You're here to talk about

So let's talk about it! Now, I racked my brain for all the good non-Goose Island craft beers I'd had from the state of Illinois during my time at Northwestern...and I came up with only Three Floyds and Half Acre, the latter of which Chad profiled last year during his discussion of Kain Colter. Apparently, Illinois has some rather arcane laws on craft breweries which prevent more good places from springing up in what (by my logic) should be a hotbed of brewing, the Chicagoland area. If you're looking for something good technically from Indiana but in Chicagoland, do try Three Floyds Brewing (might I recommend the Dreadnought Imperial IPA?).

Instead, though, I left the state of Illinois and decided to pair this beer more with the circumstances of Ellis' touchdowns: 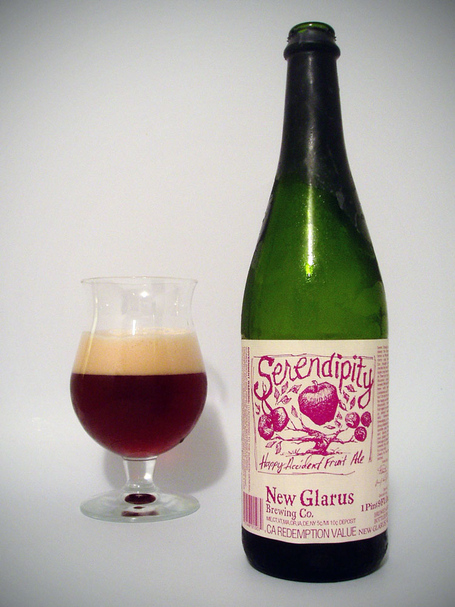 And seriously, my goodness were those pick-sixes serendipitous.

Serendipity was born of a poor cherry harvest in Wisconsin as NGB attempted to buy enough fruit to produce another high-quality sour ale -- buying apples served to cover some of the difference. But if you've ever driven I-94 through cities like Tomah and Warrens, you know what fruit Central Wisconsin can produce in bulk: cranberries. And OH MY GOODNESS did they ever. I don't go nuts for fruity beer, but if you've never tried Serendipity, bribe someone from Wisconsin (or exiled in this hellhole oh hayyyy) to buy you some. It's a seriously perfect sour ale with a tartness that can only be the product of a wonderful, wonderful set of lucky circumstances. You can read more about it at New Glarus' site, or you can just acknowledge that it's time to get off your ass and go get some of this magic in a bottle.

Ah, what a happy accident. Right place, right time for buying fruit for this sour ale.

Collin Ellis of Northwestern and Serendipity of New Glarus, your Off Tackle Empire Player of the Week and Beer of the Week. Cheers!