I would like to apologize if this look back at the Purdue football trainwreck of ought thirteen comes off as a little depressing. "Time heals all wounds," is a famous saying, and (Barenaked Ladies voice) "It's been" not one week but several weeks since the end of the season. It's been a blessing to not have Purdue's historical badness shoved in my face every anymore. For that I am truly grateful.

This probably won't be as long as the previous post mortems have been, but that's for the best. At some point all of the embarrassing losses starting blending into each other, and it the season turned into a massive blob of sadness and ineptitude.

I think almost everyone agreed going in that it was going to be a tough year for Purdue. The new coaching staff, led by Head Coach Darrell Hazell from Kent State, had their work cut out for them. The best skill position players were gone and there weren't any obvious replacements ready at the beginning of the season. The non-conference schedule was pretty daunting, and it didn't get easier once conference play started.

The Non-Con: It begins 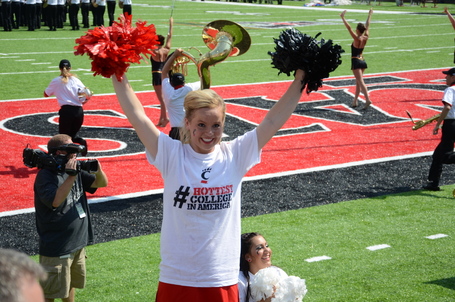 It was really hot that day. That's the joke.

The first game for Coach Hazell and the new look Boilermakers was at Cincinnati. It was a terribly hot game, and not a particularly good one. The highlight for Purdue was a long Cody Webster punt that was mishandled by the Bearcats. Purdue recovered and scored a TD on the drive. The only second half highlight I remember was a Purdue player getting an interception in the end zone and the refs called it a touchdown for Cincinnati. It was overturned on review, but that was really the only other positive that stuck in my mind from this game. Final score 42-7 Bearcats. Ouch.

After the Cincinnati game, I had two thoughts. Thought #1: "No way we are that bad. Cincy is pretty good, they won their conference last year. I mean, we're bad but not that bad." Thought #2: "Oh my God, we are absolutely terrible. Our defense can't get off the field and our offense is atrocious. This is going to be a terrible year."

When the Boilers ran a reverse for a TD on the opening kickoff against FCS Indiana State (coming off a blowout loss to Indiana), I was thinking Thought #1 was correct. Sure, Purdue will be bad and get beat by good teams, but the Cincy game was a fluke. Then we couldn't pound it in from the goal line on about six chances against a bad FCS team. The Sycamores were driving with a chance to win the game at end, but an interception stopped it. That 20-14 game would be the only win of the season.

Notre Dame came into town the next week and it was clear that this team was not the Notre Dame that went to the championship game the previous year. QB Rob Henry had his best half of the year by far in the first half, and the Boilers had a lead going into the fourth quarter. Alas, it wasn't to be. The Irish won 31-24 and that was probably the best that Purdue played all season.

An early conference game against Wisconsin didn't go very well either. The offense managed less than 200 yards and the defense couldn't stop the Badger rushing attack. 41-10 was the final.

Jordan Lynch and Northern Illinois then came to Ross Ade and gave Purdue a beating. Rob Henry lost the QB job for good after a terrible first half. In the second half, Danny Etling came in and threw a couple of TDs against NIU's second stringers. He would remain the starter for the rest of the year. Final score 55-24. At this point, it was obvious that Thought #2 from above was the correct way of thinking. Embarrassing loss count: 3.

The Conference Season: It doesn't get any better 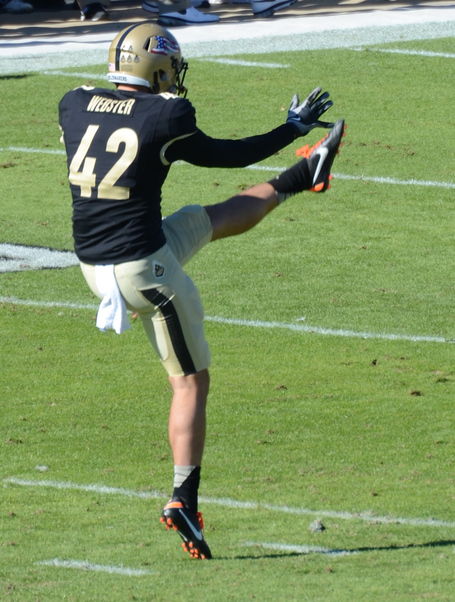 Cody Webster was utilized a lot in 2013.

I'm not going to go into as much detail about the conference season, because it really isn't that interesting. Just bad loss after bad loss.

Nebraska 44, Purdue 7: No part of this game was good for Purdue, other than it might have been the last chance that anyone had to sell their tickets for a decent price. After beating the Huskers 28-0 in 1958, Nebraska got their revenge in the first of many blowout conference losses for Purdue. After this game, one of the only bright spots on the offense, WR BJ Knauf was suspended for shoplifting tie clips from Kohl's. Tie clips.

Michigan State 14, Purdue 0. The Rose Bowl champs only beat Purdue by 14 points. Of course MSU's excellent defense was able to shut down the Boilers, who had been shut down by much lesser squads. The Boiler defense did pretty well though, if that is any consolation (it is).

Ohio State 56, Purdue 0. This one could have been much worse. Urban called off the dogs in the second half. Purdue wore black helmets for this game, which they haven't done for twenty something years. I didn't like them. Embarrassing loss count is now up to 5.

Iowa 38, Purdue 14. The shutout streak is halted at two in a row. Purdue scored its first TD in three games after Iowa mishandled another good Cody Webster punt. It isn't quite "Punt to Win"; it's more like "Punt to not get shut out every game." Hazell put in backup QB Austin Appleby in the fourth quarter and he managed to throw a long TD pass to Danny Anthrop in garbage time.

Penn St 45, Purdue 21: The offense wasn't as terrible as it had been for most of the season, but that is a very low bar to clear.

Illinois 20, Purdue 16: This was the first game since Notre Dame in which Purdue actually had a shot at winning. As most humans are aware, the Illini football team is not good at all. The defense kept the Boilers in the game, and the offense even scored two TDs in the first quarter! Etling threw an interception with the Boilers driving that effectively ended the game. I actually had some hope that we could pull this one off after going up 14-0, but that wouldn't have fit the "Worst Team Ever" narrative.

Indiana 56, Purdue 36: The score made this one seem a lot closer than it was. A fitting conclusion to a bad season. Down 49-16 going into the fourth quarter before getting a few garbage time scores. Yuck city.

Embarrassing loss count for the season: 7

Total loss count for the season: 11

Purdue football in 2013 was Charlie Weis at Kansas level awful. Okay, it was probably worse than that. I knew the schedule was going to be rough and we weren't loaded with talent, but man that was terrible. The defense was very bad. The offense was atrocious.

Purdue was competitive in the second half of three games for the year. I really hope that the experience that the young guys got playing this year leads to better things down the road, but I'm not very optimistic.

Really, the best way to describe the season is by showing you my most treasured hunting/trapping picture. 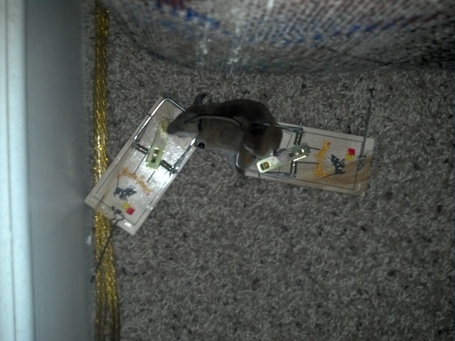