Trying to make any sense from the season so far.

Indiana defeats Wisconsin, then loses to Northwestern, both in Assembly Hall.

Northwestern wins 3 Big Ten games without scoring 60 points in regulation in any of them.

Iowa is the 3rd highest ranked team in conference.

Michigan and Michigan State are the only undefeated teams left in conference play.

The only team below .500 for the season is also the only team searching for its first Big Ten win. That team is Penn State. (OK, that one makes a little bit of sense.)

If all of the above seemed completely logical to you, I recommend you either head to Vegas or to a psychiatrist. Possibly both. Because if you had said at the start of the year that we would be here at this point of the conference season, almost no one would have believed you. (Sorry, Penn State fans.) And yet.... 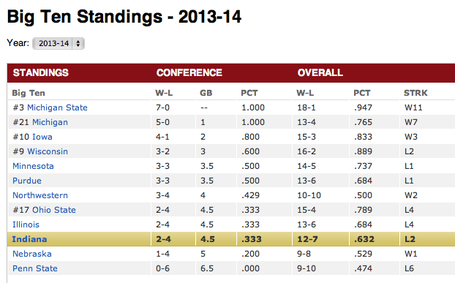 (If I have to explain to you why Indiana is highlighted on here, go read any of my other articles.)

In order of ranking as listed above, some of the games that prove the conference is drunk and approaching drunj very fast (all commentary and win/loss records as of Wednesday prior to any games tipping off):

Part of me wants to hope that the craziness will end soon and we can figure out just what the conference will look like in March. The other part of me says that this is the year for YOLO #TeamChaos4Lyfe. One way or another, there's lots of time left in conference play for just about anything to happen. And this year, it just might.