What a game this was. We were at the Harrison Roadhouse pregame, discussing how this game was going to be the springboard to getting Spartan fans focused on basketball. It served its purpose, laying down the strengths (explosive talent) and the weaknesses (beat the press?) of this Spartan team. Sitting rows above the OSU bench, watching Assistant Coach Greg Paulus talk the whole game, I wondered out loud: "Who will score for OSU this year?" It's a legitimate concern. The Bucks feature a great defensive backcourt and are well-coached, but who is their shooter? Who is the inside threat?

The Bucks made a tremendous comeback, relying on Aaron Craft drives to the bucket and second chance points. It's the best game of the B1G's short conference season.

The new rules hurt Craft, he cannot reach in with impunity. It doesn't mean he's not a great defensive player, but it just changes his game. 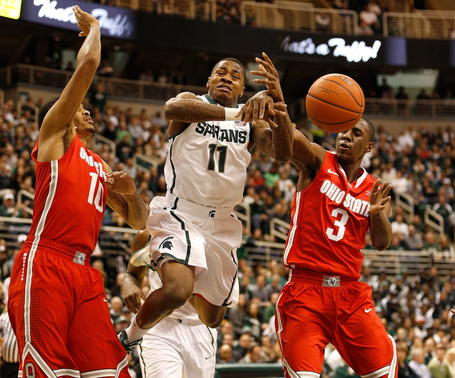 Speaking of Craft - he watched the offense struggle for 3/4 of the game and then finally took over at the end of regulation, finishing athletic drives to the bucket. Still, in this game, Keith Appling > Craft.

Kenny Kaminski. Big shots from a guy who is always ready to shoot. It became a running gag between my buddies, speaking Kaminski's thoughts out loud whenever MSU had the ball. "Hey guys, I'm open, guys, feeling it, hands up and ready, ready to shoot, awww why did you go inside, here I am open on the three point line."

MSU barnstormed out to a huge lead and then pissed it away behind conservative offensive tactics and being unable to handle the press. Hopefully the Spartans learned their lesson.

Did I mention Greg Paulus is Aaron Craft's assistant coach? Why don't they just get Wojo to be their special adviser and have Christian Laettner handle the team's Twitter account? Amazing high level trolling by Ohio State.