Michigan 70, OSU 60: Survival Of The Toughest

Share All sharing options for: Michigan 70, OSU 60: Survival Of The Toughest

Some questioned on MGo whether they should be celebrating beating a possibly mediocre OSU team. I will answer whatever question there is about last night's game: Yes, Michigan fans can celebrate. The B1G is compromised now of about 8 teams that beat each other on any given night. So if you win a game, especially a road game against your rival, you best be celebrating. None of this "OSU isn't very good and that means we're just a bit better than mediocre" talk. You won, and you won exhibiting good signs for the future of this season, and you boosted your tourney resume. 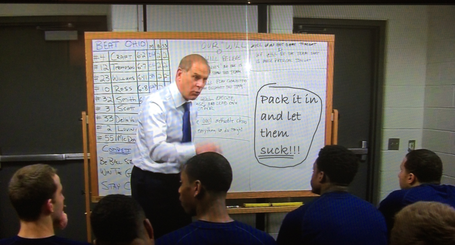 Amir Williams submarined any Buckeye thoughts about winning when he ran into Derrick Walton shooting a desperation three. This was a legendarily bad foul. I wrote that in my notes. "Legendarily"

Love watching the Bucks play perimeter defense. Michigan survived the perimeter pressure to get easier shots as the game wore on.

There was much broadcaster discussion of grit and toughness, as if one team is working harder than the other and it's not all dependent on positioning...But let's give credit to the offensive rebounding of Michigan, which swayed the game in the 2nd half. The Wolverines outrebounded the Bucks easily.

Derrick Walton Jr. Goodness. 13 points, 10 boards, 6 assists. He was going up and snatching boards between multiple Buckeyes. He's alllll ready to be an NCAA star.

Who will score for the Buckeyes? If Ross isn't hitting, who will?

Michigan has quite a luxury to sometimes have four players with point guard capabilities on the floor.