Let's be honest, it's probably the latter.

I came across something a friend posted on Facebook from CollegeSpun.com, and it was pretty enjoyable. Typing in phrases like "Northwestern is..." into Google, the intrepid author then put them all on a map. Your text to link here. It's pretty fun. 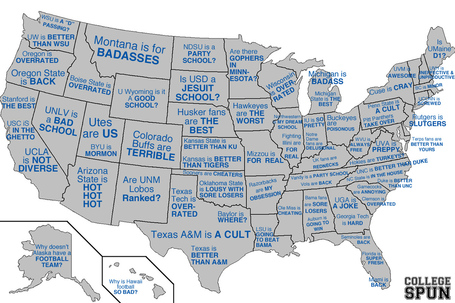 My favorites, top-to-bottom, in whatever order I felt like.

"Northwestern is my DREAM SCHOOL"

"Michigan State is THE BEST"

This one just generally made me laugh. All that time, Sparty, and it turns out you were the best after all! It's a shame you can't let that thing with Big Brother go, though. All because he gets more attention...

I don't know why some of y'all have been calling them "Buttgers" all this time. This one's way funnier.

"Husker fans are THE BEST"

"Terps fans are BETTER THAN YOURS"

But seriously, hilarious, right? Does Maryland have football fans?

"Hawkeyes are THE WORST"

(2) Typical OTE writer, including something bashing the Hawkeyes. WHERE IS YOUR FAIR AND BALANCED JOURNALISM?!

"IU is SO PRETTY"

"Fighting Illini are FOR REAL"

Sometimes, things don't have to be funny.

"Are there GOPHERS IN MINNESOTA?"

No points. God have mercy on your soul.

I swear, if there is one Michigan State fan commenting about this... Break out the Obsession.

Yes they are, kids.

This has been your Off Tackle Empire Public Service Announcement(TM). Carry on.

"Penn State is A CULT"

Hark! Do you hear? Penn State fans, rushing to defend their Success and Honor against the terrors of the Google Autocorrect! YOU FIENDS! FIENDS!