Do two hoops victories help ease the pain of one football loss?

Michigan looked terrible early, going down by eight points and looking stagnant offensively. Then, quickly, the Beilein high screen system and one-on-one matchups overwhelmed the porous Spartan defense, and it was a Meeechigan sweep.

The Michigan Wolverines are pretty much who we thought they were; a talented, but perimeter based team relying on three point shooting and ball control. There is one individual who no one knew would factor so heavily into the success of Michigan: Caris LeVert. He's big at 6'6'', featuring long arms and torturing defenders with drives to the bucket. Shut down Stauskas? Okay, Caris isn't afraid to initiate the offensive attack. Here's what Yahoo! says about CL:

In LeVert's past eight games, he has averaged 17.3 points and has scored at least 12 points in seven of them. That has elevated his season average to 13 points per game, good enough for second on the team behind Stauskas. Throw in the lanky 6-foot-6 LeVert's ability to rebound, distribute and guard opposing teams' top perimeter scorers, and his all-around value begins to become clear.

The Spartans are not who we thought they were. The tremendous talent that dotted the Spartan lineup has been plagued by injury, leaving Applying (4 star) impotent, Dawsen (5 star) out another game, and Payne (5 star) not yet back to form. Most glaring is the defensive falloff game-to-game. Death, taxes, and MSU featuring a shutdown defense, things we knew to be true from the late 90's to recently. But 2013-14 won't be one of those years. They failed to get back on defense, failed to stop penetration from the wings... 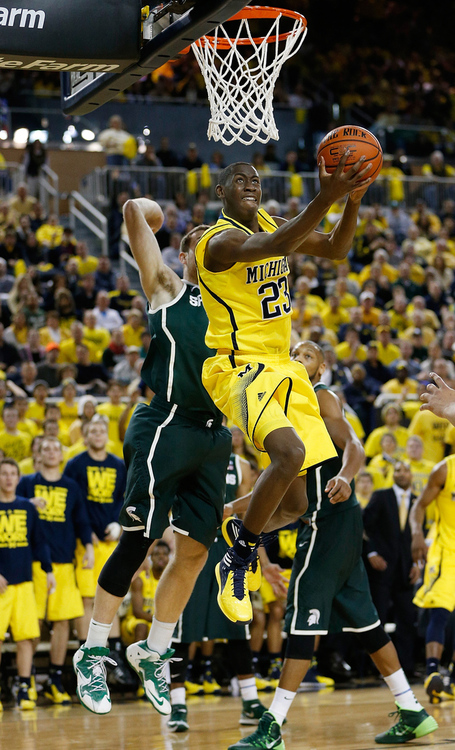 First, MSU-UM is the best basketball rivalry in the B1G right now out of those "true rival" matchups. I don't believe there are that many rivalries; Wisconsin-Minnesota, Indiana-Purdue, UM-OSU, Illinois-NW come to mind. If you're looking at game to game intensity, importance of matchup outcome, fan interest...UM-MSU has delivered the last few years.

Second, the Spartans have lowered the bar for NCAA expectations. I always felt like the pieces of the Spartan puzzle were too good not to pick up at least a #3 seed and make a March run. But now I see a #4 seed with suspect defense. Could Payne and Harris dominate a few NCAA games on sheer talent? Sure. But a solid NCAA foe is going to find this MSU team less impenetrable compared to what we all believed.