Northwestern Postmortem, 2013: I Accept the Blame.

Share All sharing options for: Northwestern Postmortem, 2013: I Accept the Blame.

I'm reviving the Postmortem series for just this one article. Hi, by the way, I'm MNWildcat, and I occasionally write articles for Off Tackle Empire. Nice to see you all again. So, recapping 2013 for the Purple and White:

Five games, lots to talk and worry about. The 'Cats looked invincible only in their thrashing of Syracuse, in which the Orange scored most of their points in garbage time. Two Colin Ellis INT touchdowns would bust open the win at Cal marred by Sonny Dykes hamming for the cameras amid accusations of Northwestern faking injuries, and a sloppy offense portended troubles to come in ugly wins over ROW ROW ROW and the best kind of bear.

In retrospect (which is, after all, what this is), given the way Michigan's offense was able to march up and down on Ohio State, throwing for 343 yards on 25-31 passing wasn't entirely as impressive as I wanted to believe it was. Hell, I still believe Kain Colter got that first down, and Northwestern got royally screwed by the refs on two end-of-game plays against the two blue chip (shut up and calm down, Michigan State, I get it) programs of the Big Ten. But I digress. Northwestern's offense, we believed, looked decent against Ohio State, and Carlos Hyde was simply too good that night in Evanston. But there was Gameday, there was excitement, and there was a ranked Northwestern team taking Ohio State to the wire. In my disappointment-turned-optimism after the game, I reacted.

Pride goeth before the fall. I know that, and yet I fell victim to it.

This team just wasn't as good as we wanted it to be. Losing at Wisconsin was moderately expected, as the Badgers would employ James White, Melvin Gordon, and God knows how many other running backs to beat the 'Cats into submission just as Ohio State had a week earlier. We saw it coming, but we were powerless to stop it. Northwestern wasn't deserving, at the time, of a ranking, and they lost their #19 ranking accordingly.

There were no winners when Minnesota came to Evanston. Maybe Jerry Kill was; I should grant the Maroon and Gold that. A confused Northwestern offense, without Kain Colter or Venric Mark, took to the air 46 times against the Gophers, and Trevor Siemian disappointed, going 25/46 for a TD, 2 picks (one a costly pick-6), and a fumble. The 'Cats had been tested and found wanting in an ugly, terrible, no good, horrible football game. My dad (a lifelong Gophers fan and season-ticketholder who raised me in Section 201 of the 'Dome) and I laughed through the entire second half because it was too painful to take seriously and too comical to cry.

That loss, though, shattered our dreams. Northwestern would be an underdog the rest of the season, save Illinois. Northwestern was not the offensive stalwart we expected. Injuries played a role in that, yes. But the 'Cats have had, in the last 5 years, a proud tradition at QB of Next Man Up. Kafka for Bacher at Minnesota in '08 (he's still running, Goldy). Persa for Kafka for Persa at Iowa in '09 (lol but Ricky Stanzi got hurt therefore). Kain Colter and Evan Watkins for Persa in '10, cutting their teeth as athletes. It just wasn't there, this season. You could feel the air rushing out of the Northwestern balloon, and you hoped Fitz and Co. could stem the tide.

"Excuse Me, How Far to Rock Bottom?"

I'm not wasting any more time on Iowa and Nebraska. It was great to meet Jesse, both trips involved lots of booze and lots of fun, and that's what I'm taking away from them.

Michigan, your line was moving. This is Gospel. Congrats on your win; Bill Snyder is still picking his false teeth with your bones.

We lost to Michigan State, too. I really only half-watched this one while I was there. Green Akers brought me a Dragon's Milk. It was delicious.

SCREW YOU ILLINOIS WE STILL GOT OUR HAT 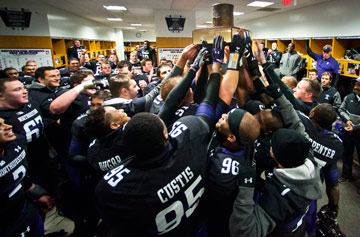 This is Pat Fitzgerald, celebrating the fact that running on 3rd-and-6 finally worked this season. It was a long year, guys.

So there you have it. Northwestern's futile, doomed 2013 campaign. I accept responsibility, everyone. My article and pride after the Ohio State game led to this fall. Which, y'know, sucked. But isn't it hilarious that even after I'm punished for my pride, Northwestern still beats Illinois? You suck, Illinois. You really do.

Either way, 2013 exposed flaws in the Northwestern offense. Losing Kain Colter will suck, but now the 'Cats must piece together Trevor Siemian at quarterback #1, despite all his struggles as QB #1B. Venric Mark returns, though without a speedy QB to run the read-option with him, he may be swallowed up by B1G defenses. The Northwestern defense showed promising signs, though the losses of Tyler Scott, Damien Proby, and Will Hampton to graduation will force Pat Fitzgerald to find the next anchors of his defense. A young secondary which acquitted itself well in 2013, though, will return in 2014, hopefully to anchor another solid defense. Oh, and Jeff Budzien. You, sir, are a god. We will miss you.

And that was it! Nothing else bad happened.

Crap. So yeah. Kain Colter and other players have attempted to form an organization called the College Athletes Players Association, or CAPA. Our Humble Leader, Graham, linked to an article, which touched off a firestorm in the comments.

As time has worn on, the situation has devolved from actually talking about the NCAA's standards for the created "student-athlete" role, instead focusing on Kain Colter's complaints about his time at Northwestern. I have argued about this at Sippin' on Purple, I have argued about this with friends, and I have maybe commented a couple times here. To be honest, I'm just one person who doesn't matter, with an opinion on unionization in college football that doesn't matter. So instead, I'm just going to quote myself from the SOP article on my thoughts on the whole proceedings. My apologies for being lazy:

Doesn’t it show the priorities of athletes, programs, and the media covering these "issues"? That a player speaking about not being able to take classes before 11am or being on a board that lacks more than 49% of the vote says as much as or more than any of those horseshit examples of human life you’ve linked to?

What sucks is that now we’re required to have that conversation of Northwestern in the same breath as those people. Right or wrong (hint: it’s the latter), a former Northwestern player (and member of the NU football family) trying to advocate for a players’ union is taking headlines on the NCAA that should be going to the absolute shit you’ve linked to. Yet our program is linked to that now.

I agree with Colter and the players pursuing a union, as they are legally allowed to. I question the manner in which it has been pursued and cast Northwestern into such a dubious light.

[Former players are] reacting because it’s suddenly "dirty laundry" associated with a program that they hold dear. College football’s system is flawed— yet to be honest, I still remain more in Herman’s camp as enumerated below. I don’t necessarily believe they are employees; I have yet to be convinced, but I am not deaf to the idea that they might be. Rumor (and occasional editorial) around here has it that that makes me a bad person. However, I do believe athletes should have the opportunity to prove that.

Regardless, the fact that the media has portrayed it as such is what it is. CAPA, I believe, knew that would happen. Kain Colter, I believe, by extension, had to have known that would happen. Instead, though, Colter’s testimony kicked Northwestern, our alma mater, for its program, though we all understand that he is, in fact, upset with the NCAA. It came off as petulant and angry at NU, and for that reason, the media has seized upon it doubly so as the erroneous "Colter vs. NU" headline.

There is more I can always speculate on as to the NCAA’s potential enjoyment of that narrative for its deflection from that organization’s own flaws; now, however, is not the time. But I do believe that the testimony and handling of Colter’s case have done (1) little to address the real flaws in college football, (2) little to actually provide inroads to progress, and (3) far too much mud-throwing at the superlative name of Northwestern’s football program relative to theCFB landscape. And I regret and resent that, "unfortunate" as it may be.

Yeah, except it's 2014. And this is still going on. So thanks, pride. Thanks, 2013. The Season from Hell that just won't die for Northwestern.