Recapping (I guess) Northwestern at Purdue. Because not that you cared, but because I drove to West Lafayette from Milwaukee and will write about it if I please, thank you.

That was a basketball that you don't just attend. Rather, that basketball game happens to you. As if I'd done something terrible in a past life and deserved to sit through this and watch it.

I had arrived in West Lafayette from Chicago from Milwaukee on Saturday evening, which I spent visiting a PhD friend in the Materials Engineering department and partying with awkward MatEng grad students. Goodness gracious. 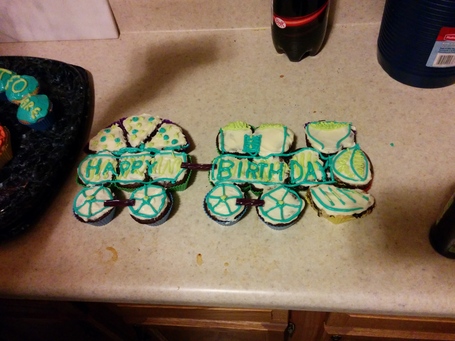 This town is weird, you guys.

It happened. That's about as kindly as I can put it. After Rapheal Davis made a layup to cut the Wildcats' lead to 12-11 with 12:52 left, this sequence happened:

Yes, that is in fact 3:36 of uninterrupted terrible basketball. No fouls, no dead ball plays, just three-and-a-half minutes of two bad basketball teams dribbling up and down the court, missing shots but not being competent enough to give us a respite from their incompetence.

A relatively high-energy Paint Crew and the Boilermaker faithful, initially amped up to send the seniors out with a win, had all but resigned themselves to a terrible basketball game by halftime. The student section of the second deck (where I sat) sat down after the under-8 TO in the first half, not to stand back up. The noise and cheers during possessions dwindled by halftime. Even the train whistle sounded more like a sigh by the end of the half.

The second half involved a concerning amount of offense for this Northwestern fan. Northwestern outscored Purdue by only 2, 46-44 in the second half, a score that is reminiscent of the Wildcats' 49-43 win over Illinois. Sanjay Lumpkin briefly lost the ability to miss, drawing me the ire of my Boiler friends as I would say "Oh, shit" every time he rose to shoot. Drew Crawford, in an excellent farewell, went 13/14 from the stripe en route to 27 points overall. Alex Olah added 14 of his own, while engaging in my and my friends' favorite part of the evening, his battles with Travis Carroll (hereby known as "Tacos" -- thanks, Paint Crew handout!), as captured in my snapchat: 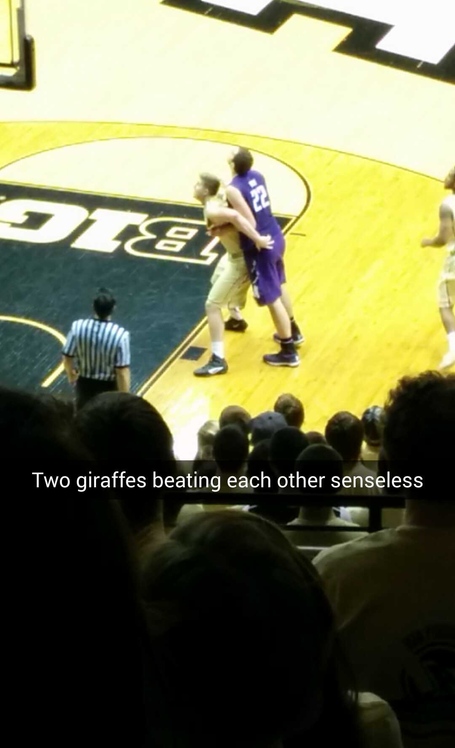 Northwestern opened up a double-digit lead with about 11 minutes to play, but a renewed Purdue interest in actually giving AJ Hammons the ball, hotter outside shooting, and Northwestern's continued adventures with breaking a press allowed the Boilermakers to whittle the lead to 6 on a Hammons dunk before Drew Crawford went and done got all onions-y as the shot clock ran down. Free throws and the usual pressbreak shenanigans lengthened the slapfight, but at the end, Northwestern stood tall(er) at 6-12, while Purdue dropped to last in the B1G at 5-13.

Just as a last thought:

Northwestern, you absolute clods. Beat Penn State, and you're sitting in a tie with Illinois and Indiana for 8th that you would've won on tiebreaker. Instead, you score 32 points in a game (which shall hereby be referred to as "a Northwestern") and draw an angry Iowa team in the first round of the Big Ten Tournament for your troubles. Enjoy the murder-death-kill that will ensue on Thursday, folks. I'm taking Iowa by 25. Is it women's lacrosse season yet?