Key Moments For The B1G Teams In The NCAA Tourney

Key Moments For The B1G Teams In The NCAA Tourney

Share All sharing options for: Key Moments For The B1G Teams In The NCAA Tourney

It's that moment when you start to believe, or come together, or begin taking steps toward completing a goal.

And each B1G team that made the tourney lived through similar moments you'll never see. When did Frank Kaminsky morph into a scoring monster during this summer? When did Nebraska buy into the "whole team effort" that shockingly pushed them near the top of the B1G? When did Caris LeVert's attacking style of offense begin taking shape?

But there were a bunch of in-season moments when Twitter exploded and hearts leaped, aflutter with the thought of success and Tourney dreams. We all saw those. Let's take a look.

50 seconds left, 1 point lead, Nik Stauskas did what he does best - shoot threes. It was so crisp, so practiced, so smooth...A big shot from Michigan's number one option.

His now famous stepback daggered a then-#3 Wisconsin team and helped continue what would be a 10 game win streak, three of those wins over Top 10 teams. After that cadre of wins, no one could deny that Stauskas and Michigan weren't legitimate threats. 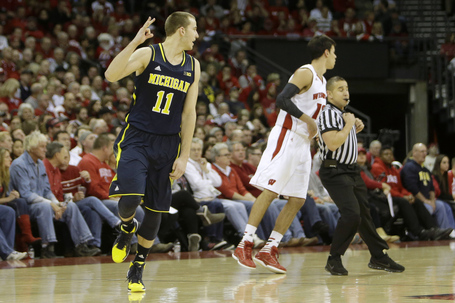 There's a "thing" that happens when you just don't have it as a basketball team. No matter what you try, it doesn't work. History is out the window, whatever your coach is saying it's not sticking...Both of these teams were getting caught in that slippery slope. And then...

OSU and Wisconsin followed similar roads: Put up gaudy win streaks, come crashing back to earth thanks to tough B1G play, find themselves and stabilize season before possible Tourney run. On Feb 4, OSU took gritty, clutch plays from Aaron Craft to defeat Iowa and shush the OTE voices which said the Bucks couldn't score the basketball. The Badgers got a buzzer beater from Traevon Jackson to beat the Spartans on February 9.

Your Nebraska Cornhuskers played 9 games at home this year in the B1G. They went 8-1. That from a team expected to finish #11 overall in the Big Ten. I just...I don't even. (Cornhusking men don't play hoops. They play football, making this recent Tim Miles turnaround even more illogical...)

All we know is that the Huskers averaged a good number of points at the Bank, rarely lost, and most of those wins featured moments when you felt the place was going to blast off or literally implode thanks to the raucous fans and BIGSHOT threeballs reigning down.

And now Nebraska is in the Tourney. Amazing. 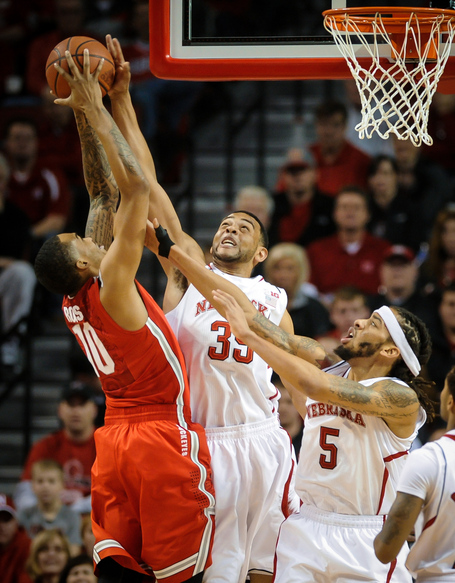