It's shaping up to be a lean kicking year in the Big Ten. Can Brandon Scherff drop-kick?

Kickers in the B1G have had...rough reputations over the past year. Every 2013 opening starter not named Jeff Budzien was unimpressive, to say the least, with multiple kickers being replaced over the course of the season. Nonetheless, with a wealth of statistics for each kicker, we take a stab at projecting the top five Big Ten kickers heading into the 2014 season!

As a note, I still don't watch football, but I did have an unimpressive career as a high school punter and kicker, so these rankings are nearer and dearer to my heart than anything, save for a 2000-word diatribe against Urban Meyer and Ohio State. Looking at each team's kickers was not fun. At least four teams will be starting kickers with, at best, mop-up experience in the Big Ten. Wisconsin's tire-fire of a kicking situation is still up in the air, with Jack Russell set to receive a challenge from incoming Brazilian kicker Rafael Gaglianone. Minnesota will likely start Ryan Santoso, a 6'5", 270# kicker out of Florida...seriously. 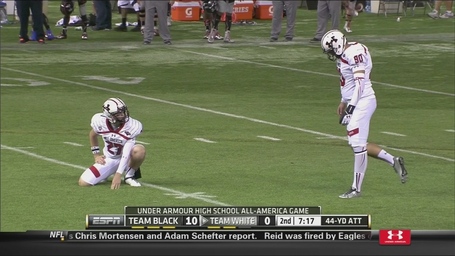 Without belaboring this anymore, let's have at it:

Taking over for opening day starter Kevin Muma, Geiger went on to earn about every All-Freshman accolade in the world, giving Michigan State some all-universe, elite specialists (stay tuned!) to go with their all-world, elite defense. Seriously, Geiger went 15-16 on FGs and 36-38 on PATs, including an impressive 8-8 mark from field goals of 40-49 yards. Look for the All-B1G Freshman in 2013 to build on his strong first campaign and start earning some Groza nominations in the future.

This is actually happening, Maryland-to-B1G, huh? OK, then, watch out for the junior out of Adelaide, kicking in College Park. The 2013 All-Academic ACC kicker went 37-38 on PATs and 21-25 on FGs, nailing one of 50 yards while earning Groza semifinalist honors. Going 4-5 from 40-49 and 1-3 from 50+, Craddock loses out to Geiger only based on Geiger's accuracy from downtown, though Craddock also handles kickoff duties and hit 12 touchbacks in 2013. These two are tough to separate; ask me tomorrow, and I may put Craddock first.

Yep. THIS is actually happening. Ficken struggled again down the stretch in 2013, missing 3 of his last 4 attempts, all of which were inside 40 yards, only hitting from 28. Going 41-42 on PATs and 15-23 on FGs, about 35 yards seems the limit of anything consistent from Ficken, and not even that is a guarantee. He benefits solely because the conference is that abysmal. Oh, and he had 18 touchbacks while kicking off and a long of 54 yards against Kent State. So there's that, too. Sam Ficken might be the third-best kicker in the Big Ten. Lord, help us all.

Finally, a representative from the West. Zalewski edges into #4, based almost solely on his accuracy (7-8) from 30-39 yards. He finished the season strong, nailing 4 of his last 5 against Purdue and Northwestern, including a 51-yarder against the 'Cats, en route to 12-17 for FGs and perfect 38-38 on PATs. Also notching 35 touchbacks, Zalewski has the leg but lacks the accuracy from distance, going 2-5 from 40+. He'll look to find that consistency in his junior season.

How sad is it that the #5 kicker on this list might not even be his team's starter when camp breaks in August? Russell took over for the abysmal Kyle French in 2013, hitting 9 of 13 field goals and showing some promise from distance, with a long of 48. His consistency (34-34) on PATs and decent accuracy from mid-range (5-7 from 30-39) should be enough to earn him the Wisconsin job, though Gaglianone will be waiting in the wings the moment something goes wrong.

The senior has done it all for the Wolverines, punting and kickoff-specialisting in 2012, punting, kickoff-specialisting, and kicking in 2013...and has an uncertain role in 2014. With the return of the suspended Will Hagerup at punter, Wile will likely have to fight for his punting job, but should hold off Kenny Allen for the kicking duties. Wile had a long of 49 yards and 37 touchbacks as a kicker in 2014, so his big leg could vault itself all the way to #3 on this list without surprising me in the slightest.