Anatomy of Madness: the Round-by-Round Bracket

Is your main bracket busted? Never fear, you too can still keep playing!

Share All sharing options for: Anatomy of Madness: the Round-by-Round Bracket

Last week, I told you about my coin flip bracket. This week, I'd like to tell you about another March Madness gimmick: the round by round bracket, aka Picking as many upsets as you want and not caring about the consequences.

This game didn't really come to public notice until a few years ago, when people tired of having their brackets completely busted opening weekend realized that it might be fun to keep trying to pick the winners each round, regardless of who won the round before. Some consider it to be "cheating", as you're not sticking to whatever your original bracket picks were, but since rooting for upsets is a big part of March Madness, giving people more reasons to root for those upsets was deemed to be a good enough reason to continue the practice.

Now, many different sites have gotten in on the round-by-round picking. This version is still not nearly as popular as regular bracket picking, but it is legitimized enough that you won't get too many weird looks for saying "Oh yeah, I'm in a round-by-round pool."

Here is an example of a completed round by round bracket from last year's tournament: 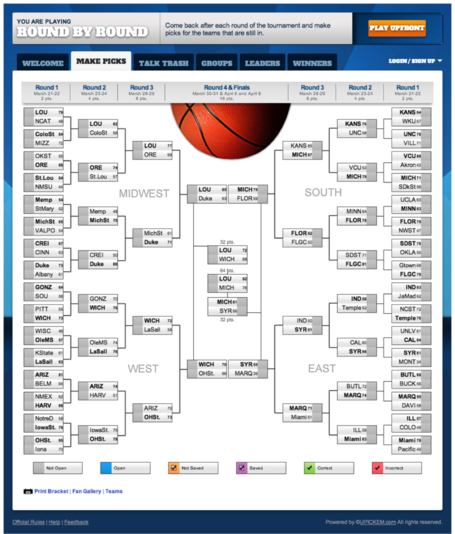 It's likely many of you already know about this March Madness game, but for those who don't, put any questions you may have in the comments below, and I'm sure someone will come along with the answers you seek. While it's probably too late to join a round-by-round bracket this year, good luck with your selections next year, should you choose to give this method a try.